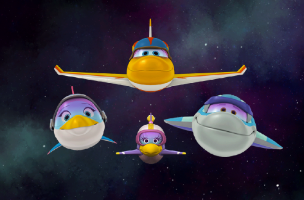 In celebration of World Space Week, Space Race has announced the launch of Space Racers! on iOS devices. The game is based on the Space Racers animated preschool television series, which airs on public television across the US. The television show was created with help from NASA, while the app itself teaches youngsters about the concepts of “cause and effect” as they race spaceships through obstacle courses.

In Space Racers, players travel through eight worlds, completing 32 stages while playing as four characters from the show: Eagle, Robyn, Hawk and Starling. Each bird-inspired spaceship is controlled in the same way. Players fly from left to right automatically, tapping on the screen to rise in altitude, and letting go to fall back down to the planet’s surface. Each level is full of obstacles and enemies, like rings to fly through, barrels to avoid, and even other flying spaceships, among others. Specifically, these rings give players a temporary speed boost when entered.

As the game is meant for younger players, it’s fairly forgiving. That is, hitting an enemy may throw the spaceship for a loop, but it doesn’t instantly end the stage. The real challenge comes in the game’s fuel system, as ships run out of fuel as they fly.

Players can pick up extra fuel canisters floating in space, or simply hope their fuel supply holds out until one of the show’s other characters appear on the screen. Even then, there’s no guarantee players will actually swap control to that new spaceship. This must be done manually, by flying the current spaceship onto the launchpad holding the fresh ship.

If gamers do happen to run out of fuel, they’re taken back to that ship’s starting point in the stage, and not necessarily the very beginning of the level.

Users collect orange stars as they play, which add to a level’s high score, while a handful of green stars in each stage gives players special items to look for while flying. Magnets sometimes appear while playing, helping gamers instantly collect all nearby stars for a limited time. Players can replay stages to collect missed green stars, or increase their overall high score.

“We are delighted to offer our fans another platform to learn along with the Space Racers television show,” says Richard Schweiger, executive producer of Space Racers! “The progressive challenges in the app complement the lessons communicated in each episode of the series and educational materials on the website.”

Space Racers! is available to download for free on the iTunes App Store. The game does not include in-app purchases.