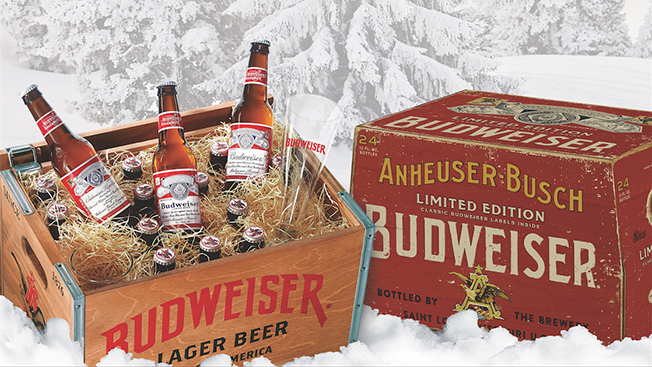 Pabst Blue Ribbon became the hipster brew of choice in the early 2000s and seemed to hold a firm grip on that distinction until Coors caught on with young, arty adults last year. And hey, there's probably room for more than two brands when it comes to the ironic beer-drinking marketplace.

With that in mind, Budweiser's #holidaybuds social media effort seems geared toward such an audience, as the King today revealed it's planting 10,000 vintage wooden crates in stores across the country this week. The packages will contain 18 bottles of Bud adorned with a classic label from either 1918 (beginning of Prohibition), 1933 (end of Prohibition) or 1976 (the brand's 100th anniversary) as well as two pilsner glasses. The crates were handmade by a North Carolina shop called Vintage Editions.

The suggested retail price, per an Anheuser-Busch rep, is less than $40 for the collectable kit.

The throwback labels will also appear on 1.6 million cases of the brew during the next several weeks. Budweiser is encouraging people who buy the classic crates and bottles to share photos of them on social platforms such as Instagram, Facebook and Twitter.

Below is the Gen Y-dominated TV spot Bud ran over the weekend for #holidaybuds.