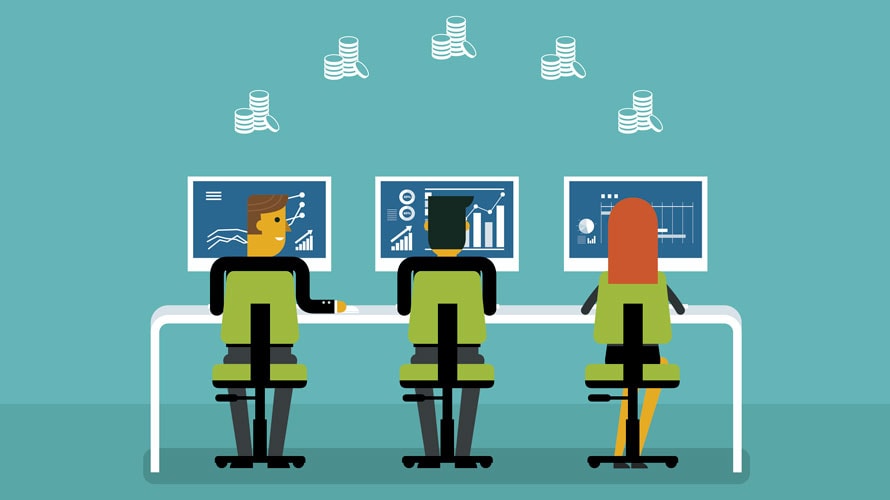 Publishers have been hesitant to devote more of their digital budgets to branded content initiatives, despite the fact that those that do take the plunge reported strong profit margins, according to the new Branded Content Project study from the Local Media Consortium and the Local Media Association, released Tuesday.

The Branded Content Project is part of the Facebook Journalism Project’s $1 million investment to assist over 2,000 local newsrooms affiliated with the Local Media Consortium or Local Media Association. The purpose is to help such newsrooms understand, develop and implement revenue streams via branded content, both on and off Facebook.

Almost 40 news organizations of all sizes and formats (digital, print, broadcast or combinations of those) from across the country and the world applied to be part of the program, and finalists included ABC-owned Television Station Group, The Dallas Morning News, Graham Media Group, McClatchy, Shaw Media, The Texas Tribune and WRAL in Raleigh, N.C.

“We were inspired by how many organizations wanted to participate in this program because they understand that no one organization has all of the answers,” said Branded Content Project lead Julia Campbell in a statement introducing the study. “They see the value in working together to find the right mix of branded content offerings to better serve their advertisers and readers. This white paper only scratches the surface of the branded content knowledge we hope to share with the industry moving forward.”

The Local Media Consortium and Local Media Association found that industries and sectors that need to inform or educate their audiences tended to gravitate toward branded content initiatives with news publishers. The top five categories encountered in the study were health/wellness, financial/insurance, entertainment, retail and automotive. 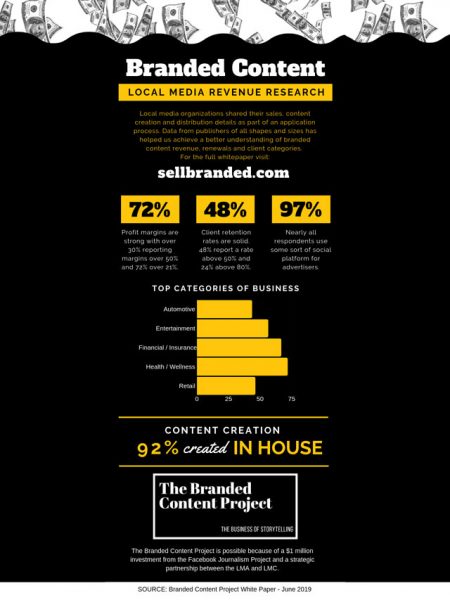 The study found that annual branded content revenue totals for 2018 were nearly evenly split among the local publishers that were included, with more than 35% of them topping $500,000 and 17% exceeding $1 million.

Profit margins were strong across the board, with 30% of participants reporting 50% or better and 72% achieving profit margins of at least 21%.

However, despite those numbers, only 9% of publishers in the study said branded content represents over 50% of their annual digital budgets, and the same percentage said it made up 21% to 50%.

Publishers in the study kept their client counts for branded content manageable, with 45% saying they had 25 or fewer clients, while just a small portion topped 100.

Those clients stuck around, though, as over 24% of participants posted retention rates of 80% or better, and an equal percentage said they were able to retain 50% to 79% of their branded content clients.

“With one-third of respondents reporting margins over 50% and one-quarter seeing client retention rates over 80%, this data informs us that when sold to businesses that need to educate or inform local audiences, branded content can be a successful way to increase and diversify revenues,” said Campbell.

Social platforms were the dominant destination for branded content initiatives by publishers, with 97% using them in some form.

When asked specifically about Facebook, 92% of respondents said the most common use of the platform was for content distribution, followed by sponsored posts (79%), promotion (64%) and Facebook Live (34%).

Sponsored native articles were the most common type of content produced by news publishers for their branded content clients, followed by social posts and videos. And that production is predominantly handled in-house, with 92% of respondents saying they do so internally. The work was split between sales and marketing departments (55%) and news teams (38%).

Finally, 87% of the publishers in the study used social media for marketing and promotion of branded content campaigns, followed by owned-and-operated online properties (71%) and paid marketing strategies (53%).

“Branded content isn’t for everyone, and we tell that to our sales teams and prospective clients alike. But for the people who believe in it and can afford to allocate enough budget to make it well, it’s a differentiator,” said Eric Brandner, general manager of Creative Lab @McClatchy, in the white paper. “Great branded content gives meaning to what you create. It builds loyalty. It educates, inspires and delights. It aligns you with your core audience’s ideals and aspirations without painting a fantastical or unattainable picture.”