The Climate Declaration is a pledge to look at business processes and sources for more sustainable options. 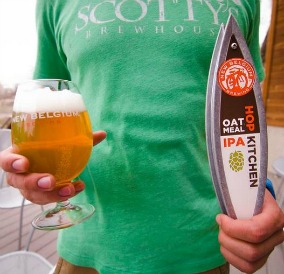 It's #StPatricksDay AND we have a new beer. COINCIDENCE??? Probably.

Twenty-four beer brewers from across the US are are joining Ceres’ Climate Declaration, pledging to reduce emissions and take action on a national level to stop climate change.

Ceres is a nonprofit coalition of companies, investors, and public interest groups dedicated to sustainability. The Brewery Climate Declaration is bringing together companies including Allagash, Aslan, Brewery Vivant, Guinness and Red Hook with a promise to find ways to be more efficient with their energy usage, water consumption and waste management in order to benefit the environment as well as their businesses.

According to the declaration page, the US has more than 2,800 breweries that generated “$246.5 billion in economic output in 2012” and created two million jobs. By taking a look at their business processes, their sourcing and even their facilities, they are looking to make a difference.

“Rising emissions, too, are expected to have negative effects for the beer industry because it relies on the cultivation of barley and hops, which are sensitive to changes in the climate,” writes Mother Jones.

Of course there’s also the impact that this will have with consumers.

“Beer is near and dear to people’s hearts,” said Jenn Vervier, director of strategy and sustainability at New Belgium Brewery. “I think when people see their favorite brands speaking out, it gives them courage to speak out. I think it makes it relatable for people.”

True. We also think that for breweries, particularly smaller ones and craft ones, it’s another way to appeal to the younger, millennials who they hope will buy their product. We’ve been following Budweiser’s efforts to stay relevant. Climate change is an issue that many people (though not all) are taking very seriously. Among them, millennials, who make purchasing decisions based on the causes they care about and the impact that a brand makes on the larger culture.

By joining in this fight these breweries are adding one more quality to attract millennial beer lovers. And if they can do a little good, maybe save a few polar bears while they’re at it, it’ll make that next beer even tastier.