Averaging a $1 cost per install 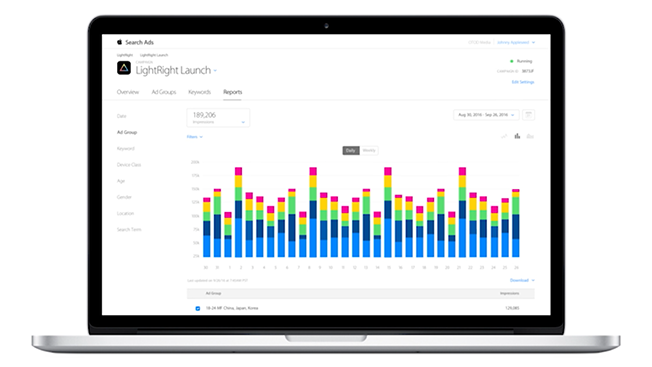 After entering the app-install space in the fall, Apple says that 50 percent of consumers who click on ads they see in the App Store go a step further and download the app.

Similar to how brands buy app-install ads through Facebook, Twitter, Google or mobile ad networks, marketers buy Apple's so-called Search Ads by bidding on keywords that place ads at the top of App Store searches. However, unlike other types of app-install ads, Apple's format prioritizes ads based on an app's category like games, travel or entertainment. Domino's, Jet.com and Amazon are a handful of brands that have purchased Search Ads to drive awareness and downloads of their mobile apps since Apple launched the format in October.

According to Apple, Search Ads average a cost per tap of 50 cents for both small and big developers. When looking specifically at small developers that typically have less money to acquire mobile users than big brands like Uber or Booking.com, the average cost per tap drops to 25 cents.

Apple claims that more than 50 percent of people who tap on a Search Ad then download the app, meaning the average cost per install of a Search Ad is $1. Those prices, according to industry standards and reports, can average out to be nearly one-fifth cheaper than other types of app-install ads, per Apple. In December, mobile analytics company Singular told Adweek that the average cost per install for Apple Search Ads was $1.31, while app-install ads on social platforms averaged $5.84, and display ads cost $2.99.

In terms of the types of brands that have been the biggest spenders on Search Ads, Apple says gaming, travel, entertainment and travel are among the top categories.

Apple sells Search Ads via a self-service platform where brands and developers set up their own campaigns. Per Apple, most advertisers use a tool within the platform called search match in which the tech company picks the best keywords for brands to buy their ads against. Advertisers can also plug an API into Apple's platform to buy their own keyword-based campaigns.