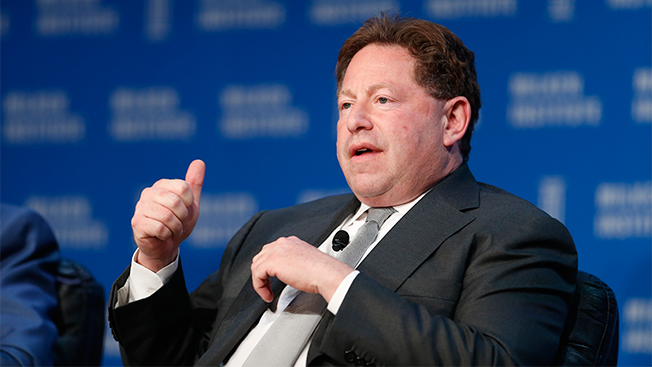 Speaking at Vanity Fair's New Establishment Summit this morning, Kotick boasted about the video gaming company's massive reach, particularly when it comes to areas like esports.

"If you think about our players, if you take Call of Duty, we have 40 million monthly active users—these people are spending hours of their day playing a game, an organized competition—that's the same size as the preseason NFL," Kotick told attendees. "These leagues like Call of Duty or Overwatch have the potential to be the next NFL or NBA."

Additionally, the Activision exec said that 125 million players watch gaming. All told, his company has 500 million monthly active users in 196 countries, he said, claiming that his network of players is five times bigger than Netflix.

The comment was part of a discussion with Les Moonves, chairman and CEO of CBS Corp. and moderated by Andrew Ross Sorkin, financial columnist for The New York Times and co-anchor of CNBC's Squawk Box.

On Tuesday, CBS and Activision announced that the broadcaster is turning the massively popular mobile game Candy Crush into a TV game show.

So, will Activision eventually negotiate with CBS over sports-licensing fees for people to watch Activision games? "Absolutely," Kotick said. "The real question though is the way they're watching today is over-the-top, so we have our own channel MLG, which is our broadcast channel for professional esports. What we view our opportunity set as if Leslie or ESPN wants to pay for the rights, a greater amount, that we can monetize on our own channel, we'll take that."

When Moonves was asked what he thinks about consumers playing video games while watching his network's shows and second-screen viewing, Moonves compared the trend to CBS reality show Big Brother, which has kept people glued to their televisions watching other people's lives for 18 seasons.

"We have 100,000 people that watch Big Brother 24/7—that means at 3 in the morning, they're watching people eat cereal," Moonves said. "The fact that they're watching an action game like that, it always seemed odd to me, but it makes sense."

Moonves also spoke briefly about the push to re-merge CBS and Viacom. In late September, the Redstone family, which hold a majority stake in both media companies, asked the CBS and Viacom boards to explore a deal.

"I haven't talked about this with anybody," Moonves said. "We're just starting the process to explore possibilities—that's all we're doing. There's committees, there's bankers, there's lawyers, and that's all I'm going to say about it."