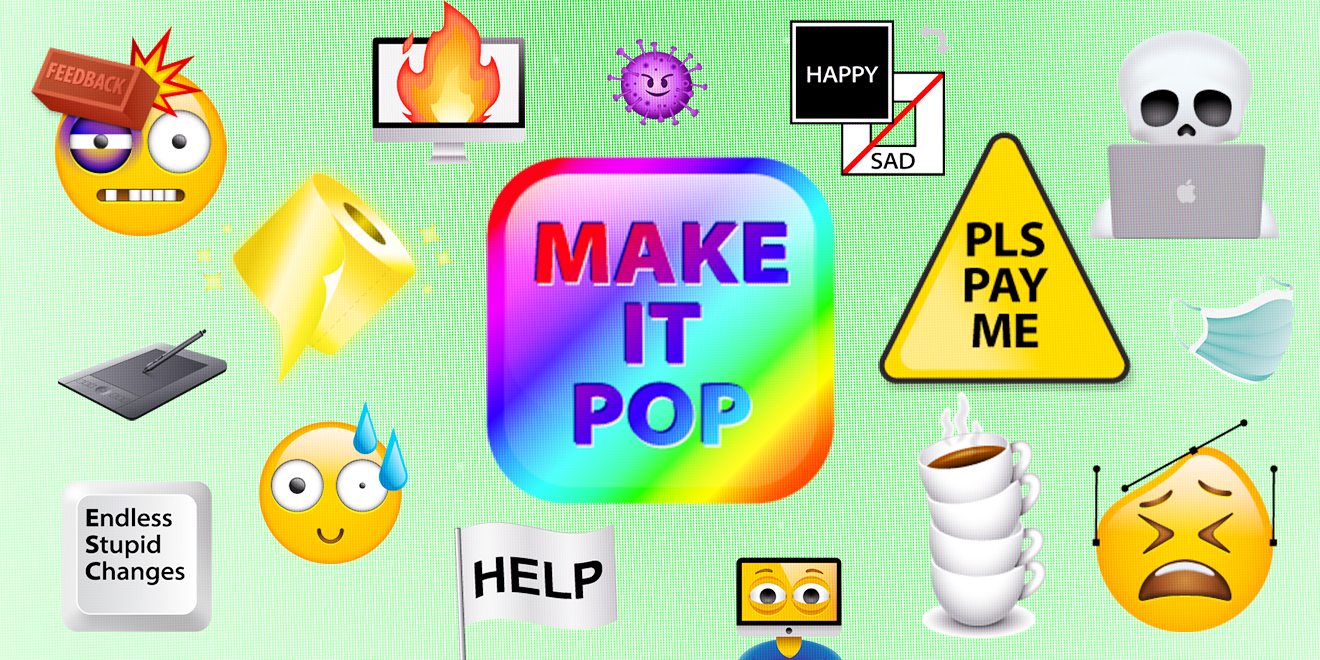 It’s another reminder that 2020 really has separated life into a 'before' and 'after,' even when it comes to emojis. Illustration: Dianna McDougall; Sources: &Walsh

Designers in Quarantine Now Have Their Own Set of Relatable Emojis

Seemingly every part of our lives can be split up into two categories: pre-March 11 and post-March 11 (this date in particular stands out as the day Tom Hanks revealed his Covid-19 diagnosis, President Trump announced his European travel ban and the NBA suspended its season). Let’s now toss something as silly as emojis into that deep bucket of things that have changed. &Walsh, the design agency launched by famed designer Jessica Walsh, is behind this fun creative quarantine exercise.

See them: If you’ve been craving a client budget as roll of toilet paper emoji, now’s your chance.

And this is how you pivot a campaign: Smirnoff was ready to go hard on patriotism this summer with a red, white and blue star-studded extravaganza. It didn’t go as planned because, well you know why. So instead of ditching the campaign, Smirnoff used the faces of the original spot, soccer star Megan Rapinoe, actor/wrestler Dave Bautista, and actresses Laverne Cox and Diane Guerrero to do inner monologues about the importance of staying home.

See it: Smirnoff creatively reedited the main spot to encourage consumers to stay home and “do it for America.”

At the end of 2019, retail experts clued us into what they thought the industry would look like in 2020. Those predictions are largely moot at this point, but here’s a few of the things they said:

Last week, senior writer Lisa Lacy spoke to the same experts for their updated takes, which include booming contactless transactions, as well as massive transformations for fulfillment models and online pickup of orders.

Read it: Get all the predictions for a heavily disrupted retail sector.

7 of This Week’s Most Telling Marketing Stats, From Booming Flour Sales to Gen Z’s Spending Habits

Let’s play a game: Real or Fake Stat. We’ll give you three stats from last week, guess to yourself which of them are fake. The answer will be below the Best of the Rest section of links.

As Once-Hyped Magic Leap Flounders, Agencies Say the AR Market Has Passed It By

Not too long ago, virtual reality headset maker Magic Leap looked poised to dominate a promising industry. Instead, VR hasn’t gone mainstream and smartphone innovations eliminated the need for a headset to enjoy augmented reality. Quarantine could have been Magic Leap’s big moment, but consumers remain underwhelmed by the product. The company is reportedly pivoting away from the consumer market and cutting 1,000 jobs—or about half its workforce.

Read more: Dive into what went long for the consumer VR and AR market.

“Our chief Social Psychologist hosted a report on how the pandemic is affecting the industry, and over 200 employees signed on! Other offerings have included guided meditation online, and some programming for the children of staffers (storytime, kid’s yoga, origami making, and more!)”

“We take turns as interdisciplinary teams selecting a game or activity for us all to play together. From two truths and a lie to a company-wide TikTok challenge, we’re doing what we can to make sure people feel engaged and committed to Cutwater’s culture even when we’re all apart.”

“We have a wheel of fortune with everyone’s name on it that is spun for the prize of free doughnuts from Bay Area legend – Johnny Doughnuts.”

“We’ve organized live virtual performance by UMG recording artists as a special treat to lift everyone’s spirit. Finally, we’ve launched virtual “coffee dates” where small groups of employees of all disciplines are selected at random for casual yet meaningful chats with core leadership. It’s an opportunity to get to know leadership on a more personal level, pick their brains, or discuss what’s going on in our industry at large.”

Last week, we hosted a virtual golf tournament where each day, over what would have been Master’s Weekend, I sent out challenging and albeit unconventional trick shots for employees to complete. Most of the office participated from their homes with whatever they had on hand. From kitchen utensils and ping pong balls to golf clubs, videos were shared and a leaderboard was announced each night. The winner won $150.