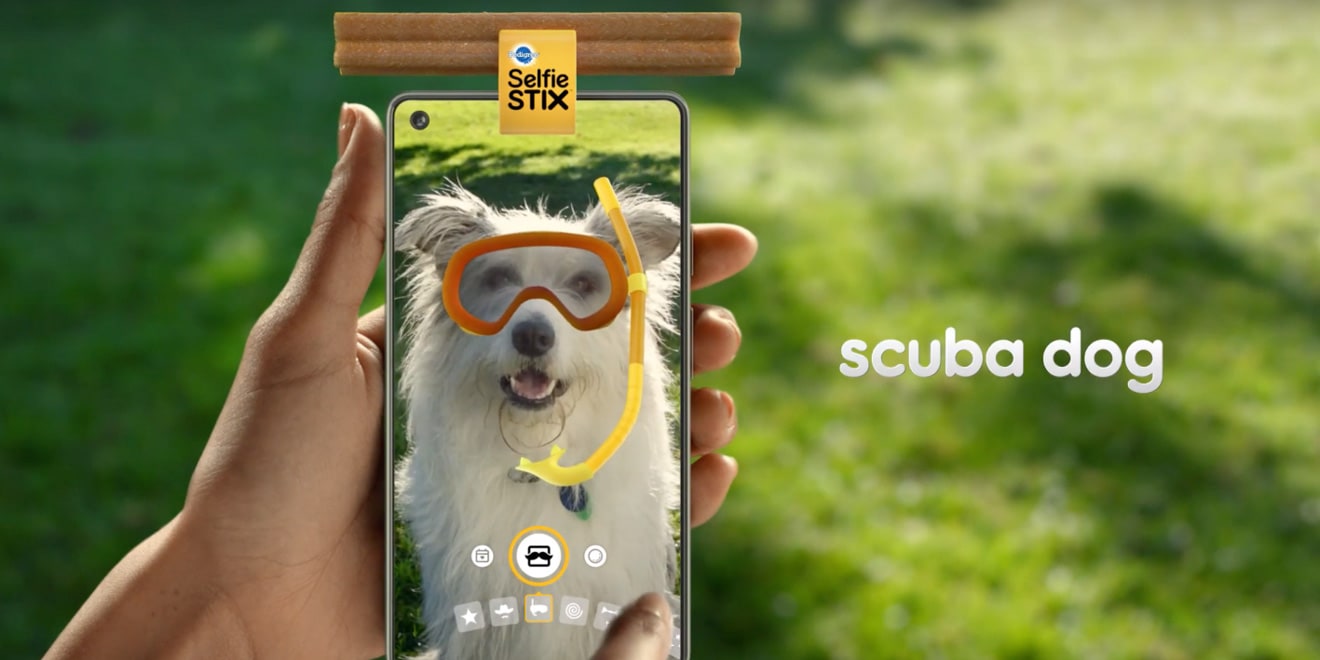 Pedigree's app for dog owners includes three different tools that people can use to snap photos of their pet.
Pedigree
Share
By Minda Smiley
|
July 9, 2019
Share

If you’re a dog owner, chances are you’ve tried to take a selfie with your pup and encountered varying amounts of success.

Getting your pet to look directly at the camera is no easy feat, but Pedigree has come up with a delightfully simple solution to our dog selfie woes. The brand’s SelfieStix product, which is currently available at thousands of Targets across the country, clips on to any smartphone and holds one of Pedigree’s DentaStix treats on top.

Once it’s on, dogs have a hard time looking away from it … which is exactly the point. The clips are being given away for free with select purchases of DentaStix. The Mars-owned brand has also tapped Danielle Jonas (wife of musician Kevin Jonas) and Pretty Little Liars actor Ian Harding to promote the clip.

SelfieStix isn’t exactly new, as it was first introduced by Colenso BBDO in Auckland, New Zealand, two years ago, but Pedigree has now brought the innovative product—which won a gold Lion in the mobile category at Cannes last year—to the US, in addition to a revamped app that has a suite of features for dog lovers.

The app, called DentaStix Studios, has three tools that users can play around with. One is PupBooth, which is essentially Snapchat for dogs, as it features a number of different filters that use dog facial recognition technology. The team that worked on PupBooth used the Stanford Dog dataset to train a machine learning network by feeding it thousands of images of dog faces.

Another, dubbed DogDays, lets users track their dog’s life and growth via daily photos, while GoodLens gives people a “glimpse into the world their dog sees” by transforming a DentaStix into an array of objects, like a bouquet of roses, magic wand or baseball bat. Once the treat has been identified by the app, owners can then film their dogs having fun with an object of their choosing.

Following its US launch, DentaStix Studios will also launch in New Zealand and Europe.

“We knew that an activation like Pedigree DentaStix Studios was an immersive, fun and relevant way we could remind pet parents about daily oral care for their dogs, especially for the younger audience who don’t really consume linear media anymore,” said David Griffin, global brand director of Pedigree.

According to Griffin, the original SelfieStix activation that launched a few years back resulted in increased sales in the more than 30 markets it was introduced in, so the brand is hoping to capitalize on this success in the US by pairing the clip with the app.

“We think it’s pretty well known now that dogs enrich our lives and make us feel good,” said Kim Ragan, creative director at Colenso BBDO. “So we wondered if we could inject some of this doggy goodness into a place that makes people feel pretty bad a lot of the time—social media. That’s how DentaStix Studios was born. It’s early days, but if we’ve learnt anything from SelfieStix, it’s that people love nothing more than sharing their dogs with the world. It’s our hope that DentaStix Studios can capitalize on this behavior and demonstrate the same commercial success for the Pedigree brand.”