To build buzz around its first animated feature film, Netflix decided to get into the holiday spirit.

The streaming service this week unwrapped three giant mystery gifts in New York, Chicago and Los Angeles to kick off a charitable campaign around the holiday film Klaus, which was released today.

The activations launched Netflix’s larger “Letters to Klaus” initiative, in which the brand partnered with Big Brothers Big Sisters of America—a donor- and volunteer-supported mentoring nonprofit—to fulfill thousands of holiday wish lists written by children in the mentoring program, who are called “Littles,” with the help of their adult mentors, who are called “Bigs.” 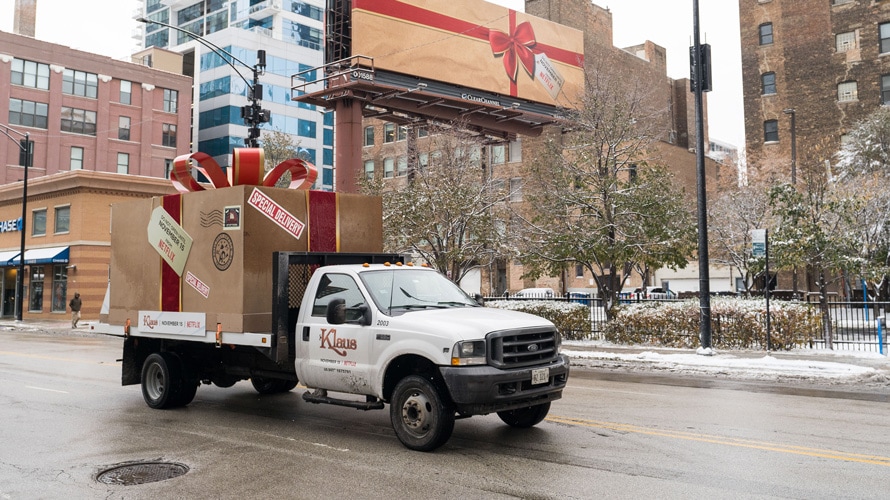 The mystery gifts were teased on pickup trucks in each city.
Netflix

To coincide with World Kindness Day on Nov. 13, Netflix invited members of the nonprofit’s local chapters to unwrap the massive gifts, which were placed in Times Square in New York, The Grove in Los Angeles and Pioneer Court in Chicago. Netflix worked with brand experience agency CSM to create the presents, which were teased last weekend on pickup trucks that traveled throughout each city.

The unwrapping revealed stations with more than 1,000 gifts for passersby to take home, with the intent for the gifts to benefit local communities. The gifts, which were pre-wrapped in holiday-themed Netflix paper, were handed out by brand ambassadors dressed as characters from the film.

The daylong activations also featured stations for kids to write letters to Santa, which they could place in a branded mailbox. Additionally, the pop-ups had gift wrapping stations for consumers who started holiday shopping early and wanted to wrap their own gifts.

Each activation ended with Netflix publicly revealing its own donation to the Big Brothers Big Sisters of America local chapters. The streaming service also plans to carry out more charitable efforts surrounding the film during the holiday season.