How a Topless Mermaid Made the Starbucks Cup an Icon

She’s a little more modest today than in the ‘70s

Every day, millions of people walk into any of 20,519 Starbucks in 65 countries, and most walk back out with the same thing: a white cardboard coffee cup. Do you know the one? Of course you do. “Starbucks cups have become part of the cultural backdrop, an unconscious reminder that the brand exists,” observed management consultant and business speaker Can Akdeniz. “It’s an extremely powerful piece of packaging.” 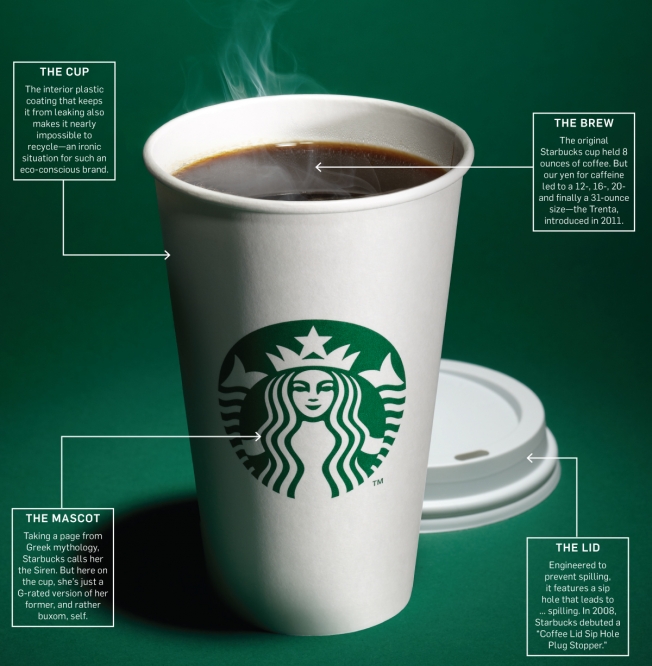 And every year, Starbucks sells somewhere around 5 billion of them.

The story of how a simple paper cup got to be the most recognizable to-go container in the world is a strange one, and it’s about to get even stranger. Because, before we talk about the cup, we have to talk about breasts—a mermaid with breasts, actually.

In 1971, Starbucks (then a mere fledging coffee shop on the Seattle waterfront) was looking for a logo, something that would embody the seafaring history of its home city. The three founders hired a consultant named Terry Heckler. According to CEO Howard Schultz, Heckler “pored over old marine books until he came up with a logo based on an old 16th-century Norse woodcut: a two-tailed mermaid.” (Medieval-minded blogger Carl Pyrdum has pointed out that there were no Norsemen left by the 16th century, but let’s just move on.)

The mermaid was exotic. She was also topless. At first, and despite some complaints, Starbucks just rolled with it. As Schultz later explained, “Bare breasted and Rubenesque, [the mermaid] was supposed to be as seductive as the coffee itself.” But then the time came to put the logo on the delivery trucks, and that was problematic. “The logo was huge,” Heckler’s website relates, “—and so were the mermaid’s breasts.”

Starbucks solved the problem by restyling the mermaid’s hairdo so it draped over the trouble spots. Then, in 1986, entrepreneur Schultz bought out the original Starbucks partners and modified the logo by placing the mermaid in the center of a green circle, a striking and memorable badge for that white cardboard cup.

The resulting device became an icon nearly overnight. Bryant Simon, author of Everything but the Coffee: Learning About America From Starbucks, relates the folklore of how Madison Avenue interns used to splurge $5 on a Starbucks latte, drink it and then carry the empty cup around for the remainder of the week. “They wanted people to see them with the cup,” he said. “Through the intervention of users, Starbucks was able to make that cup shorthand for someone who was discerning, sophisticated and had enough money to waste on coffee.”

1. In 1971, the first Starbucks opened its doors in Seattle, featuring a sign made of painted cedar planks. When the building was demolished in 1974, the company moved the furnishings to a new “original” location at 102 Pike Street. This store (where the wallpaper is made from old burlap coffee sacks) is still open today.

2. Starting in the ‘90s, the Starbucks coffee cup enjoyed cameos in both TV and film. Carrie Bradshaw took a stylish sip in this 1998 episode of Sex and the City. In 2006’s The Devil Wears Prada, tortured assistant Andrea buys Miranda her coffee each morning, bringing it in those perennially fashionable white cups.

3. The original mermaid, au naturel from 1971 (top), and just below, her contemporary counterpart.