When Audrey Arbeeny addresses an audience, she likes to play a game called Name This Sound. Arbeeny, founder of the New York-based sonic branding firm Audiobrain, plays several jingles in a row—Intel's bongs, the NBC chimes, HBO's white noise—and asks attendees to guess the corresponding brand. Success varies, except for one instance.

"I've never had anyone not be able to identify Nokia," Arbeeny said. "That's the sound they immediately recognize."

As well they should. The original Nokia ringtone is possibly the most played tune in history. Even though customizable ringtones have swept the little song aside—and even though Microsoft's disastrous acquisition of Nokia in 2013 cost it $7.6 billion in red ink—there are still a billion Nokia phones floating around the world. Today, over 20 years since the Nokia ringtone debuted, it's still heard at a rate of 20,000 times every second.

Two decades is a long time for a song to stay a hit—especially since Nokia's jingle was actually written in 1902. That year, Spanish guitarist Francisco Tárrega composed a waltz called the Gran Vals. As a classical piece freed from the constraints of copyright, the waltz wound up as a backing track for a Nokia TV spot in 1992. A year later, when Nokia's Model 2110 phone debuted with a tonal buzzer, Nokia picked a snippet of Tárrega's waltz and used it as the new phone's ringtone. 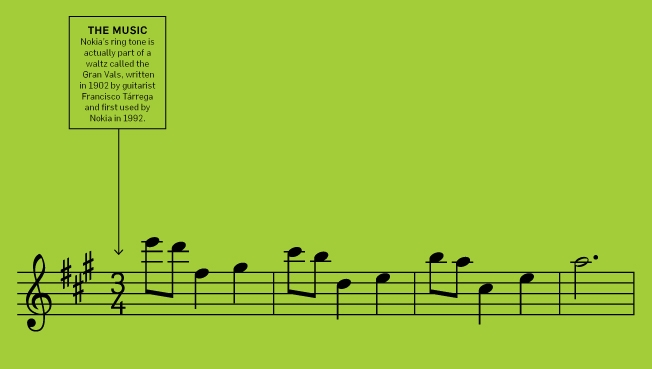 These days, those who poke fun at the little jingle forget just how influential it was.

First off, since Nokia's melody was unique to the brand, the ringtone helped to make the Nokia name synonymous with cellular phones. "I'm sure it helped to increase brand awareness," said Colleen Fahey, U.S. managing director of audio branding firm Sixième Son. Chris Lowery, president of Chase Design Group, pointed out that Nokia's ringtone helped consumers forge a personal connection with their digital devices at a time when such a relationship was hardly common. "It was friendly and melodic and you felt different," he said. "You engaged with the device."

"The Nokia ringtone played a big role in the cellular phone's integration into popular culture," said Dan Lafferty, director of music and voice for U.K.-based PH Media Group, which specializes in audio branding. "Aside from their practical uses, cellular phones act as a status symbol too, and the development of the Nokia ringtone allowed customers to benefit from the kudos associated with a brand that was seen as cool and cutting edge at the time."

So cool, so cutting edge that today, attendees at Arbeeny's talks still instantly recognize the ringtone created by the once-dominant Nokia. After all, she said, "They did it first."