Today's strict brand guidelines date back to one moment in '96 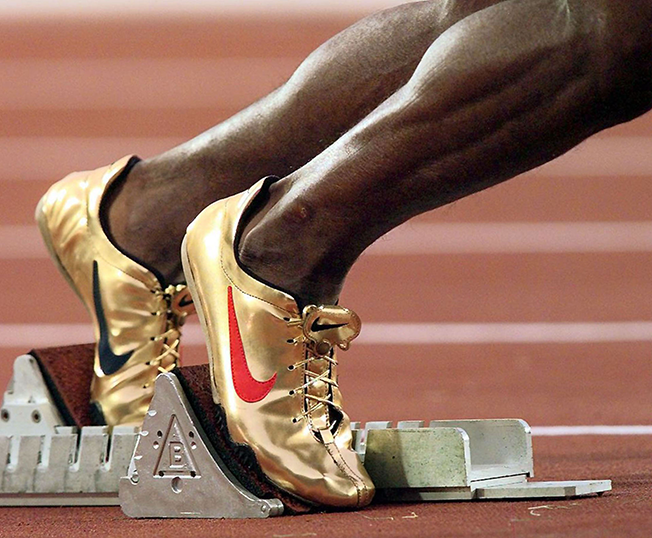 Unless you happen to be a company like GE, Coca-Cola or McDonald's—a brand that can afford the reported $100 million to $200 million it costs to be an official Olympic sponsor—you'd better not mention the Rio games in your marketing. 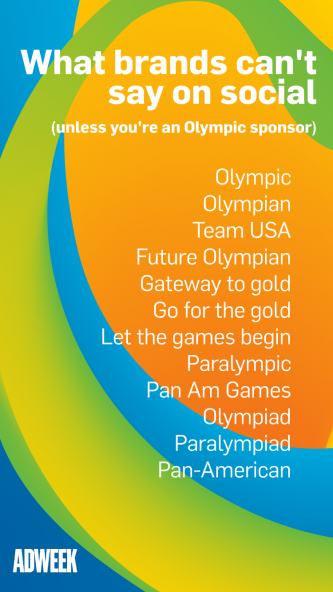 As social-savvy marketers have quickly learned, the U.S. Olympic Committee has ironclad regulations, backed by U.S. trademark law, that restrain nonsponsoring brands from saying anything even vaguely evocative of the Olympics. A casual mention of Rio on Facebook? A congratulatory tweet to a gold medalist? Even tweeting the term "gold medal"? Don't do it.

"There's a good chance they'll come after you, especially if you're using what they consider their intellectual property," said Jim Andrews, svp at sports and entertainment marketing agency ESP Properties. "Most brands don't do it because it's not worth the risk." The IOC reportedly has a pack of lawyers waiting to pounce on any brand that runs afoul of its rules.

But have you ever wondered how those rules got so ridiculously tight?

The IOC has zealously guarded its trademarks for decades, of course, but if there was one tipping point, it happened 20 years ago, during the 1996 Summer Olympics in Atlanta. And on July 29, 1996, two pieces of history were made—the athletic kind and the marketing kind. That afternoon, sprinter Michael Johnson took the gold in the 400-meter dash after finishing in 43.49 seconds. Tall, muscular and graceful, Johnson blew past his competitors as though they were standing still. Adding to the mesmerizing effect were the gold-colored shoes that Johnson wore on the world's fastest feet—a $30,000 pair of lightweight racing spikes given to Johnson by Nike.

Not only did millions of TV viewers see those Nike shoes on their screens, millions of Americans saw those same shoes slung around Johnson's neck a few days later on the cover of Time. It was hard to imagine a more successful piece of marketing for any Olympic sponsor.

Except for one little problem: Nike wasn't an Olympic sponsor.

Instead of paying for an official sponsorship, Nike decided it could get its brand into the 1996 games in other ways—and Johnson's gold shoes were just the beginning.

The brand opened an outsized "Nike Centre" right beside the athletes' village. Nike also distributed flags to fans, guaranteeing that its swoosh logo would be in full view all over the property.

Such tactics infuriated Reebok, which had ponied up a reported $50 million to become an official sponsor, and had a similar effect on Olympic officials.

What's more, according to veteran sports marketer and Columbia University professor Joe Favorito, Nike's marketing shenanigans were largely responsible for Olympic officials taking a hard line on nonsponsoring brands getting anywhere near the Olympics in their marketing. (The United States Olympic Committee did not respond to Adweek's request for comment for this story.)

What Nike did in Atlanta 20 years ago, Favorito said, "directly resulted in the much more stringent guidelines that both the IOC and the USOC have out there today. Anyone who goes over the line will be pushed back." If the IOC is showing its teeth to transgressor brands today, it cut those teeth in 1996. But even though Nike did manage to get lots of cheap media exposure from its ambush marketing, the brand didn't exactly come out of Atlanta a winner.

Nike's marketing had a distinctly abrasive edge to it. For example, the brand's magazine ads blared: "If you're not here to win, you're a tourist." Nike also bought billboards space all over Atlanta to announce: "You don't win silver, you lose gold."

To some members of the public, such talk ran contrary to the spirit of good sportsmanship.

"Nike took a lot of flack for that campaign," Andrews said. "It wasn't in the spirit of the games. There's a lot of consumer love for the Olympics and the athletes, and that [marketing] just crossed the line for a lot of people."

Those people included many of the athletes and, of course, the USOC itself. Michael Payne was the marketing coordinator for the Olympics that year. As Payne recounts in his 2012 book Olympic Turnaround: "Athletes, who had devoted their life [sic] to training and just getting to the Olympics, were angry at being positioned as 'failures.' … We weren't going to sit back and let Nike's ambush marketing undermine and trash the very spirit and essence of the Olympic ideal."

By Payne's account, the USOC was prepared to round up a bunch of silver medalists to speak out against Nike publicly, and drew the brand into a closed-door meeting that nearly came to physical blows. Nike softened its tactics, Payne suggests, after realizing that its "campaign was backfiring" and by the time the 2000 Summer Olympics in Sydney came around, the brand "showed it was an Olympic convert" by becoming an official sponsor.

According to Po Yi, an advertising attorney with the New York firm of Venable LLP, "Nike realized that, after the IOC tightened the rules, they could no longer do ambush marketing." Not surprisingly, Nike's version of events doesn't give as much credit to the iron hand of the Olympic Committee. According to Nike spokesperson Charlie Brooks, Nike signed on as a sponsor for the 2000 Sydney games largely because Reebok pulled out of its deal at the last minute.

"I don't think our entire sponsorship strategy has changed as a result of what happened in Atlanta in 1996," Brooks said.

As for its easing up on its mercenary tone and tactics, "Nike has built a brand on, to some extent, edgy advertising and brand image," Brooks said. "And certainly at that time, we were pushing the envelope in terms of those ideas. We continue to have an irreverent edge to us, but we're aware of the need to do that in the framework of events like the Olympics."

These days, brands thinking of ambushing the games have to contend with a set of rules made stricter in large part as a consequence of the 1996 games. "The list of no-no's has gotten much longer," says Yi, "and that's partly because of the effective ways that brands including Nike have engaged in ambush marketing through the years."

Yi adds, though, that the IOC has recently loosened up on its Rule 40, which now grants brands that sponsor individual athletes a chance to work with them during the games—even though it retains the ironclad prohibitions against using the Olympics rings and logos, or and even words including "victory," "summer," and "gold."

Meanwhile, now that Nike is an official part of the Olympic family, it no longer needs to resort to the kind of guerrilla marketing tactics that got it so much attention two decades back. Clearly, though, Nike hasn't forgotten the Atlanta games and all the attention—good and bad—the brand got there.