With brands buying in, it's big business now 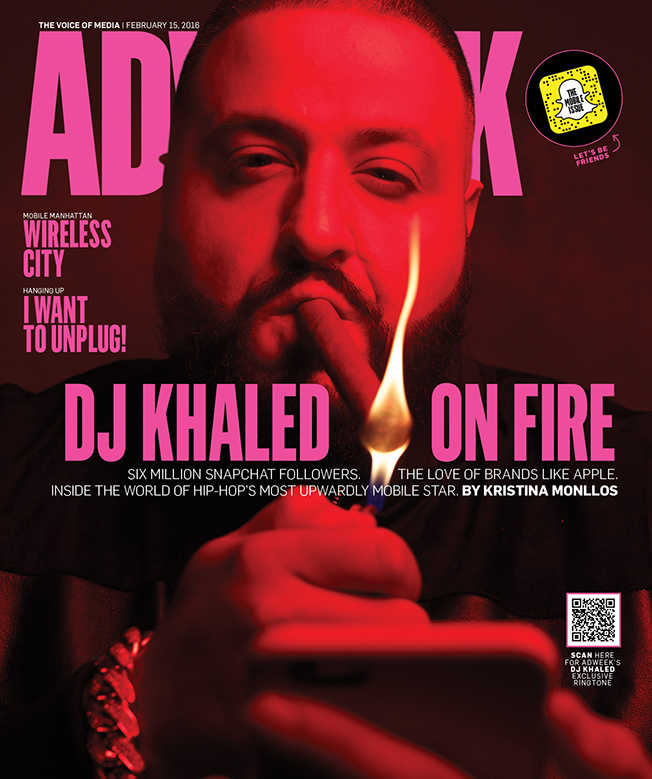 King of Snapchat DJ Khaled wants you to know he's up to something. Of course, if you follow him on the wildly popular mobile platform, you already know that. He takes to the app every day to share with the world exactly what he's doing, and planning, and thinking—producing a record, paling around with hip-hop star Nas, praising Ciroc vodka, sharing inspirational life lessons—all in his particular brand of extreme magnetism crossed with blustering machismo. 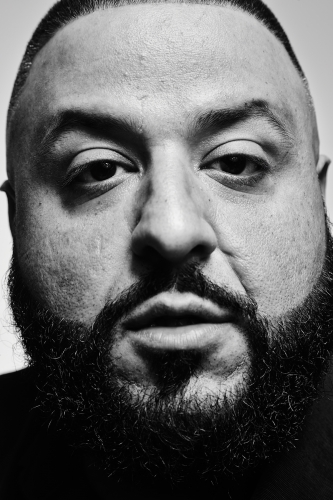 As for what he's most interested for you to know at this moment, maybe you caught his snap from last Monday when he was in the studio with artist Future, dancing along to music that those watching, however, were not allowed to hear. The text over the snap—"I wish you could [hear] this I'm working!!! [You'll] see!"—is punctuated by his signature emoji, a gold key, signifying an alert about an upcoming project or one of Khaled's keys to success. Later that day, a few more snaps in the same vein follow, with Khaled, in his distinctively gravelly timbre, promising that when he's done with this album, "it's going to be crazy."

To the casual follower of his Snapchat, it would appear what we've got here is just another super confident hip-hop personality living large and boasting about it. That assumption would be woefully off-base. Khaled isn't merely promoting himself and his work to millions through the app—he has figured out how to use the ephemeral nature of Snapchat to his advantage by tapping into his followers' voyeuristic tendencies and making the world of music, celebrity and mega-success accessible. Consumer brands like Ciroc, Fusion and Apple Music are tapping into Khaled's massive social following, with some 6 million people logging into Snapchat to check out his day-to-day activities. Khaled boasts 14.3 million total followers across Snapchat, Twitter, Instagram and Facebook. His handle is @djkhaled across all of them.

In 2006, when the 40-year-old, whose real name is Khaled Mohamed Khaled, released his debut Listennn… the Album—the first of eight records that showcase his mastery of the anthem and the Miami hip-hop sound—Snapchat didn't even exist yet. Neither did mobile apps. Today, Snapchat claims 100 million users and 7 billion video views on any given day, and has the undeniable power to boost a career like Khaled's. And while he's been in the music scene for some time, his social media stardom has brought him to a whole new level. Last month, he signed with the Hollywood talent agency UTA and is set to appear in the forthcoming, untitled flick Judd Apatow is working on with The Lonely Island guys.

When asked to explain how a middle-aged guy became one of the hottest personalities on social media (The Washington Post bestowed that "King of Snapchat" on him), Khaled doesn't so much lay out the steps to his success as he stresses that he has earned it. To him, the fact that he's now blowing up in the social sphere is the result of years of toil—and in his mind, doesn't have all that much to do with a now-famous Jet Ski incident last December that had him lost at sea for a couple of hours and posting snaps the whole time, in fact kick-starting all the buzz around his Snapchat feed.

Still, Khaled insists, "I've been saying these keys for 10 years. I'm just telling you what the keys to success to me [are], you know what I'm saying? And I'm telling my story, but you know what? A lot of us can relate."

On the surface, Khaled's story doesn't exactly come off as relatable. He is, after all, entrenched in the glamorous world of hip-hop, hanging out with celebrity friends (A-listers like Jay-Z, Drake and Kim Kardashian West pop up in his snaps) and punctuated by travel, parties and luxury hotels. The narrative makes sense—Khaled is a DJ, artist and producer and has become a major figure in the music world. And yet, when one peels back the onion, it becomes clearer that there is something very relatable about it all.

What is most fascinating about Khaled's explosive rise is that he is not some teenager with a smartphone who's used a popular app to become the clown of the moment or to share makeup tutorials or to assume the mantle of "voice of a generation." Rather, he is a man of experience who has found a way to maximize his personality, his bravado, his altogether positive outlook on life via the right platform at the right time, essentially creating his own bite-sized reality show. And as anyone who's had a taste of Khaled's videos understands, it's all highly addictive.

"What he's doing on Snapchat is unreal," says Nick Cicero, founder and CEO of social shop Delmondo, which pairs marketers and media brands with Snapchat influencers and analytics. "From my experience, DJ Khaled is probably beating some Snapchat Discover publishers in terms of the number of people that are coming to his channel every single day and watching that content."

All those eyeballs make Khaled an irresistible partner for brand marketers. It isn't only that so many consumers are seeing his feed every day, it's who is watching. For advertisers looking to tap into an elusive young demo, Snapchat has become the place to be, with an impressive 60 percent of smartphone users in the U.S. aged 13-24 using the app. And Khaled's is one of the most popular feeds, confirms Snapchat.

And it's not just consumer brands that have come calling. Last month, the White House briefly handed over its newly created Snapchat account to Khaled to promote Obamacare. "I love Obama," says Khaled. "I think Obama is an amazing president, so if Obama ever asks me to do something, I can't wait."

"DJ Khaled puts so much passion and excitement into his music and his life and conversation and Snapchat and all of it—it's crazy, he's crazy," says Zane Lowe, director of Beats 1 for Apple, which this month launched the radio show, We the Best Radio, with Khaled. "He's a whirlwind and people love him," Lowe adds.

Larry Jackson, head of content at Apple Music, agrees, calling Khaled "a force of nature—he's passionate, ambitious, and most importantly, he is real. It's that honesty that his audience relates to and why his fans love him so much."

His typical Snapchat story is broken down into segments with recurring themes and an eclectic cast of characters. If one watches long enough, he or she will quickly come to appreciate the consistency not only of his voice but also his daily routine. "Chef Dee" always makes him egg whites for breakfast. Khaled can't resist shouting "Lion!" at a statue of one in his yard. He also loves to water his plants and wax on about how inspirational they are to him, representing life and growth. Khaled likes to point his camera at his feet as he walks along a path in his backyard, inviting fans to join him on "the pathway to more success." An "us against them" theme runs throughout his snaps. He is particularly fond of using the term "they" to refer to the haters of the world—"They don't want you to win," for example. (The single "All I Do Is Win," from his 2010 album Victory, went double-platinum.) During the photo shoot for this cover story, Khaled sums up his making it despite those who've tried to keep him down: "They don't want me on Adweek, so I'm going to be on Adweek!" (Video of Khaled can be seen at Adweek.com and on our social feeds.)

Brands also have a prominent role in Khaled's snaps. Just a little more than a week into his partnership with Apple Music, the advertiser is being featured in a regular segment in Khaled's Snapchat story. (Khaled's reps won't divulge financial details of his relationships with advertisers.) Sometimes it's hard to tell whether a brand in Khaled's feed is a bona fide partner or simply a product he's into. The relationship with Ciroc is a long-standing one, his having partnered with the brand years before his Snapchat account took off. Of the Ciroc relationship, Khaled says, "I have a saying, 'Celebrate Success Right—Apple Ciroc' and I'm just letting people know it's OK to celebrate success. It's just a vibe and I make sure when I do bring [Apple Ciroc] up, I promote to be responsible because, you know, that's a major key to me. Don't be out there chugging to be drunk and all that."

So, it would reason that when he gives a shout-out to Listerine, the Johnson & Johnson brand is paying for that exposure. It isn't. The same goes for products like Palmer's Cocoa Butter. Such mentions are merely another glimpse into the personality's real life—not that he wouldn't be open to more formal relationships with the brands he loves. Explains Khaled: "I really use Listerine and I really use cocoa butter—but if you can pass the word and tell them, hey, it would help me feed my family. … "

Getting Khaled to call out a brand on Snapchat isn't the only way marketers are taking advantage of his success. MasterCard, IHOP, Denny's, Burger King and others have appropriated his sayings—among them, "Bless up," "Another one" and "Major key"—in an effort to appeal to millennials. Khaled is not compensated for any of that.

For brands to sidle up to Khaled makes sense, says Marshal Cohen, NPD Group's chief retail industry analyst. "Creating a language that resonates with the social media consumer is critical," he explains. "Every brand is trying to figure out [how to connect with millennials], and when you have that language like DJ Khaled does and are resonating with that hard-to-reach target, it's absolutely critical to play that up when you can."

Adds Tom Buontempo, president of KBS social shop Attention: "From the start, DJ Khaled has been consistent on his platform and in his vernacular, so much so that it's transcended culture to the point that other brands are trying to jump on board."

According to data from social analytics firm Shareablee, social media mentions of Khaled by brands, media and celebrities have grown dramatically in a very short time. From November 2015, when he joined Snapchat, through January 2016, those mentions scored 936,000 actions (clicks, likes, shares) on Facebook, 356,000 on Twitter and 3.3 million via Instagram. In other words, precisely the kind of social engagement brands crave.

Khaled uses his considerable influence to promote his own branded products, too. Last December, his company, We the Best, launched a clothing line featuring T-shirts, sweatshirts, shoes and more—all merchandise Khaled wears in his videos, naturally. This year, Khaled plans to open retail locations in New York, Miami and Los Angeles. 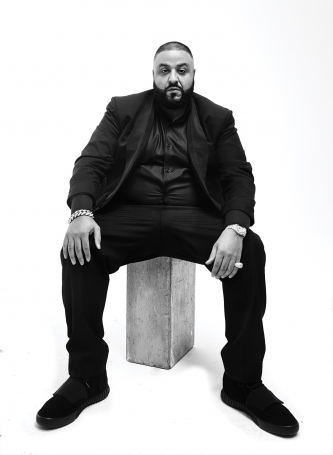 Whether promoting his music or his clothing line or the products of major brands or Obamacare, one thing is consistent throughout Khaled's social output: his absolute, infectious, almost evangelical positivity.

In a recent comedy bit on ABC's Jimmy Kimmel Live, the host, pointing to Khaled's "inspirational and motivational messages," wondered whether they might help raise the confidence of lackluster presidential candidate Jeb Bush. Kimmel drives home the point by showing a snap of Khaled's in which he describes the sky and tells his followers to not worry about the clouds but, rather, to just focus on the blue.

It might've been a punch line for Kimmel, but that steadfastly upbeat tone is serious business to Khaled. But he says he doesn't much care how his attitude is perceived—he takes tremendous pride in being positive about his success and encouraging others to succeed.

And Snapchat will continue to be his preferred platform for spreading that message of positivity and confidence.

The image that comes across in his snaps is that of "a winner," as Khaled sees it. "You're looking at a winner."