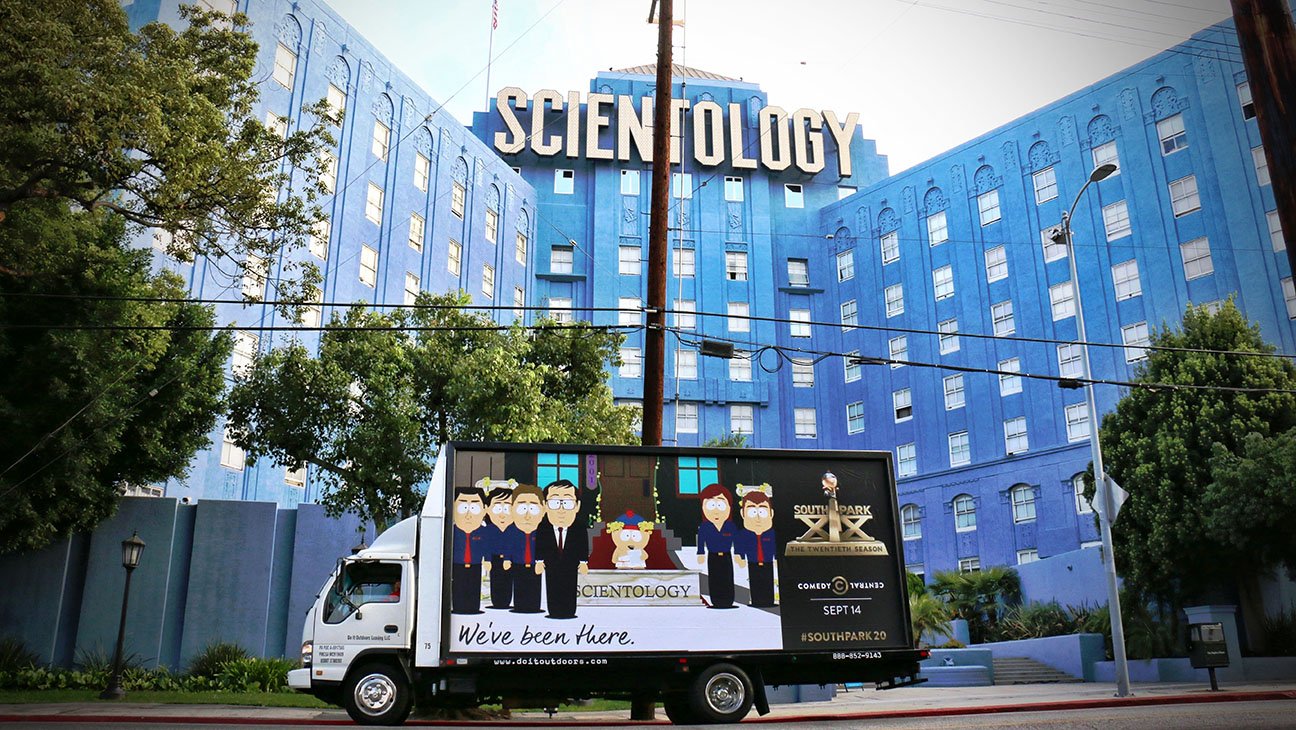 We will never be able to forgive South Park—or thank it enough—for that one time it utterly decimated native advertising in a story arc. But to promote its 20th season, the show briefly took its gaze off current events and launched its own version of a stroll down memory lane.

People got pissed. (Or so Comedy Central claims. Wait a sec—is this an ad, too?!)

Mobile billboards have been placed in various strategic locations around the country. Each plays on its environment, depicting a moment in the show that took place wherever the billboards are parked, and ends with the tagline, "We've been there."

It's a cute gag, but some locations didn't take it so well—like the White House, the Church of Scientology and the Lincoln Memorial.

"In some cases, the locals were not pleased to have us outside their locations and asked us to leave, but that was all expected, and we completely understand why," Comedy Central's chief marketing officer, Walter Levitt, tells the Hollywood Reporter.

The Scientology billboard, shown above, comes from "Trapped in the Closet," a Season 9 episode. In it, Stan joins Scientology and is discovered to be church founder L. Ron Hubbard's reincarnation. Scientologist Tom Cruise asks Stan (er, Hubbard) whether he likes his acting, and after Stan's lukewarm response, locks himself in Stan's closet.

The episode caused a fracas when it aired: The real Tom Cruise threatened to back out of promoting Mission: Impossible III if Viacom—which owns Comedy Central, as well as Paramount, which released the film—permitted the episode to be rebroadcast. (It's been re-aired multiple times since, in case you wondered.) Obama appeared in a Season 12 episode called "About Last Night…", which fictionalized the events following his presidential win against John McCain. The town Democrats believe Obama is the Messiah and start a drunken riot; the Republicans are convinced the apocalypse is coming. The episode later reveals that Obama, McCain and their campaign staffers are actually a gang of jewel thieves.

The last drama-generating billboard appeared in front of the Lincoln Memorial: In this particularly weird episode, "Super Best Friends" from Season 5, the kids from South Park decide to join the Blaintologists, magician David Blaine's fictional cult (and incidentally another Scientology jab). Stan realizes they've been brainwashed and teams up with Jesus to activate the Super Best Friends (a play on the Super Friends). Blaine animates the Lincoln Memorial statue and orders it to kill the superhero squad, but stone Lincoln is ultimately killed by a statue of John Wilkes Booth (awkward).

"We did this stunt because we thought it was a great way to remind South Park fans of all the amazing moments of the past 19 seasons, and truly a perfect way to celebrate the 20th season," Levitt says of the mobile billboards.

Suffice it to say it's definitely brought back memories. And while they're all perhaps equally offensive to somebody, the one that truly stays with us doesn't come from an episode at all. It comes from that time South Park promoted a video game with a heinous unit called the Nosulus Rift—a VR device for smelling the superfarts that power the game's main character.

More of the billboards below.