Ad of the Day: Burger King Makes the Most Fabulous Whopper Ever for LGBT Pride

Sandwich has limited reach but a big heart 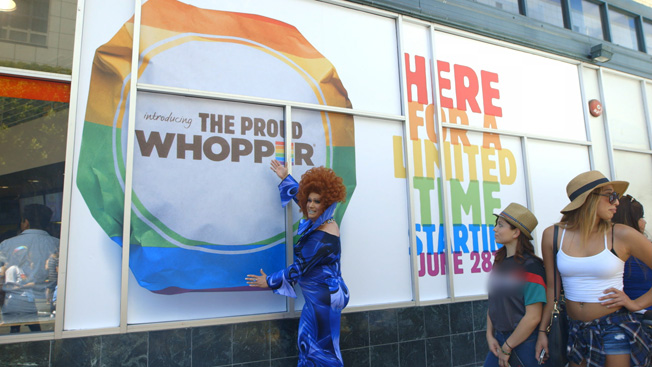 This year's Gay Pride festivities in San Francisco were surely as fabulous as ever, and Burger King jumped at the chance to make its own statement about equality with the Proud Whopper.

The $4.29 burger will be available through Thursday at a BK restaurant at 1200 Market St. in San Francisco, at the heart of that city's Pride Parade route. All proceeds from sales of the burger will go to the Burger King McLamore Foundation for scholarships benefiting LGBT college-bound, high school seniors graduating next spring.

The Proud Whopper is a regular flame-grilled Whopper, but it's wrapped in rainbow paper inscribed with the message, "We are all the same inside."

While the burger is reaching only a small, select audience, the brand hopes the video, filmed on location, will make waves online. It shows BK patrons responding to the burger and its message, starting with naysayers before gradually moving on to tearful appreciation. "A burger has never made me cry before," says one woman. "It makes me feel supported and it makes me feel proud," says another. The nearly two-minute spot ends, adorably, with a little girl shouting, "I love my two mommies!"

BK is partnering with Facebook, YouTube and other outlets to promote the video, created by agency David in Miami and production company Smuggler Films.

"We are always looking to engage our guests on a local level and be part of regionally relevant events," said Kelly Gomez, director of West Coast field marketing at Burger King. "With one of our restaurants on the Pride Parade route, it was a natural fit to be involved and celebrate by giving something back to the community."

"Burger King restaurants have always been places to eat great tasting food, let your guard down and just be yourself without any judgment," added Fernando Machado, BK's svp of global brand management. "The film and Proud Whopper sandwich are the first of many different opportunities to bring the 'Be Your Way' global attitude to life in unexpected ways."

The Proud Whopper follows LGBT Pride Month in June, which saw a rush of LGBT ads from brands including Heineken, YouTube and Lucky Charms. Brands are becoming more aware of the perils of seeming backwards on social issues, and supporting gay rights is increasingly seen as good for business. (It can also be good for creativity. A TBWA campaign that turned ATMs into GAYTMs for LGBT pride recently won the Grand Prix in Outdoor at Cannes.)

While this is the first such initiative from BK in the U.S., the chain said it has "sponsored LGBT events outside the U.S. and even decorated some stores during pride weeks" in the past.

BK recently retired its long-running tagline, "Have it your way," in favor of "Be your way." The Proud Whopper could be an indication of what to expect from the brand going forward, as it attempts to appeal more to consumers' lifestyles and individuality.