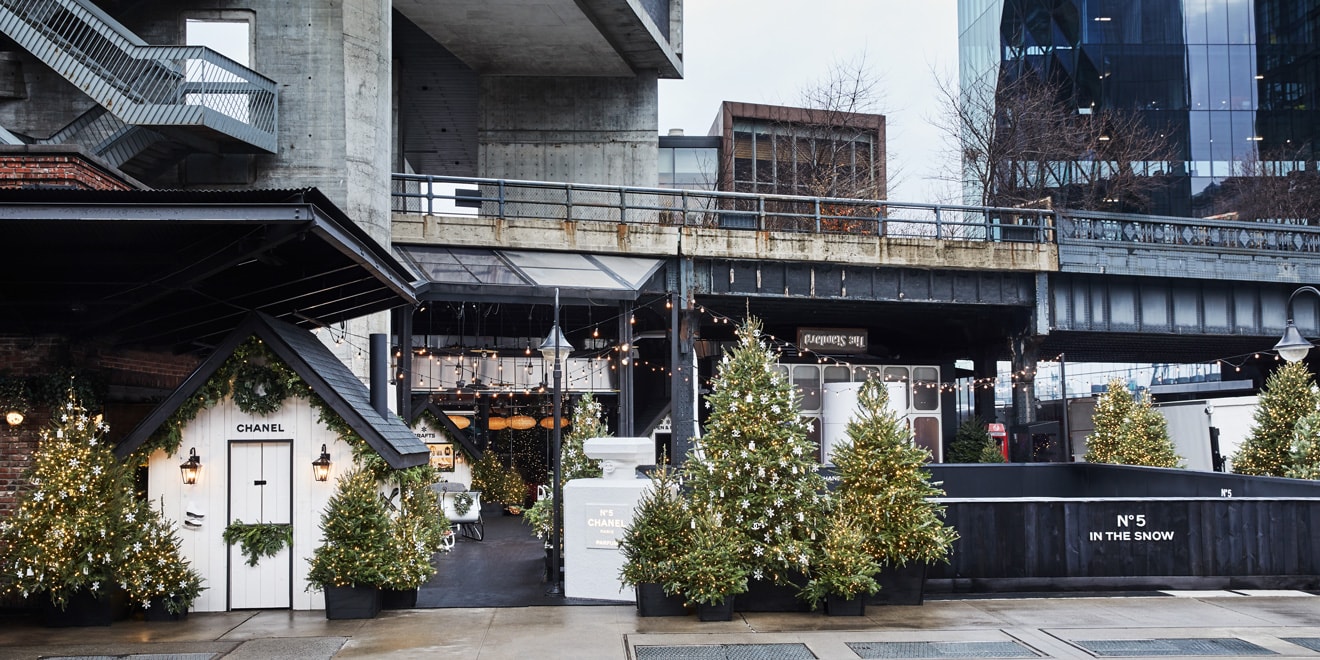 Chanel's No. 5 in the Snow pop-up took over The Standard, High Line in New York. Chanel

The holiday season is an ideal time for brands to bring online shops and campaigns offline with interactive pop-ups, which can provide consumers with gift ideas and festive social media fodder. From Chanel’s wintery pop-up with an AR snow globe to Yahoo Mail and BuzzFeed’s gamified marketplace, here’s how eight brands have engaged consumers this season. Yahoo Mail and BuzzFeed's pop-up had interactive stations including the Unsubscribe Game.
BuzzFeed

Yahoo Mail introduced consumers to its redesign by partnering with BuzzFeed for a day-long holiday experience on Dec. 13 in New York. The event had a number of interactive stations, including the Unsubscribe Game, a carnival-style booth where guests could crumple and toss unwanted emails into “unsubscribe” baskets while a “junk mail” heckler tried to block their attempts.

Other stations included a Tasty cookie decorating station, a mini marketplace with vendors curated by BuzzFeed where guests took BuzzFeed and Yahoo email quizzes. Guests could keep track of their participation at each station with an “inbox checklist,” which they could redeem for prizes. The two brands tapped Crony Creative to produce the experience.

Chanel’s No.5 in the Snow Chanel hosted a free public pop-up resembling a stylish ski chalet, inspired by the French fashion house’s 2019 holiday campaign for the No.5 L’eau fragrance. The winter-themed activation took over The Standard, High Line in New York from Dec. 12-15, offering ice skating along with seasonal treats and photo ops.

The brand created an AR experience tied to the pop-up, inviting consumers to unlock a branded snow globe on their mobile devices. The holiday campaign stars brand ambassador Lily-Rose Depp, who stares into a snow globe holding the fragrance. TheSkimm opened its first online store and physical pop-up shop that aims to make the holiday shopping experience less stressful. Following a survey of its audience, the female millennial-focused media company found that its readers spend 20 hours preparing for the holiday season on average; 68% said shopping for gifts is their top stressor.

The brand worked with experiential marketing agency Pop-Up Mob to create the physical store, which is open through Dec. 24 in New York. The store offers three floors of curated products found in the online shop, which is separated by the categories of gifting, event hosting, travel and wellness. The pop-up is also hosting live programming that targets TheSkimm’s audience, including workout classes, wine tastings and live tapings of the Skimm’d From the Couch podcast. The Lego Group partnered with The Savoy in London to design 12 Lego displays in the hotel for the holiday season, including a dragon Christmas tree and a red Harley Davidson motorcycle. The event follows the Danish company’s first global campaign in 30 years, Rebuild the World, which aims to inspire consumers with the message of creativity being a necessary lifelong skill.

The event invited hotel guests to build a Lego decoration and share it on social media with the hashtag #BuildToGive. The hotel and the brand hosted two workshops led by Lego brand ambassadors to teach guests how to get creative with their builds. For every decoration built and shared on social, the brand is donating a Lego set to a child in need in hospitals, foster homes or underserved communities. PopSugar held a day-long consumer experience in New York’s Bryant Park in November to engage its predominantly female millennial audience. The media company worked with David Stark Design to create a winter chalet-inspired space, which had interactive stations from brand partners including Elf Cosmetics, Athleta and Nature’s Way. The event had meditation sessions and yoga classes, along with food kiosks and a shopping bazaar. Read more about the Sugar Chalet and PopSugar’s efforts to engage consumers offline.

Kohl’s New Gifts at Every Turn For those not in New York, Kohl’s launched a portal lens through Snapchat that allowed users to see 3D versions of the holiday windows and directed them to shop the brands online. Users were also able to pose with an avatar of Vera Wang in her display using a marker tech lens.

Facebook spotlighted its fundraising capabilities with holiday pop-ups in New York, Los Angeles and Chicago that invited people to donate to Military Mama Network, a nonprofit that supports military families in need. The social platform worked with creative agency Proud Robinson to create the activations, which had oversized gift boxes with QR codes that directed guests to the Facebook donation page for the group on their phones. Read more about the social platform’s Giving Tuesday pop-ups.

Brand ambassadors for the streaming service unwrapped giant mystery gifts in each city to reveal 1,000 gifts that were handed out to passersby, with the intent for the gifts to benefit local communities. Read more about the activations timed to World Kindness Day.