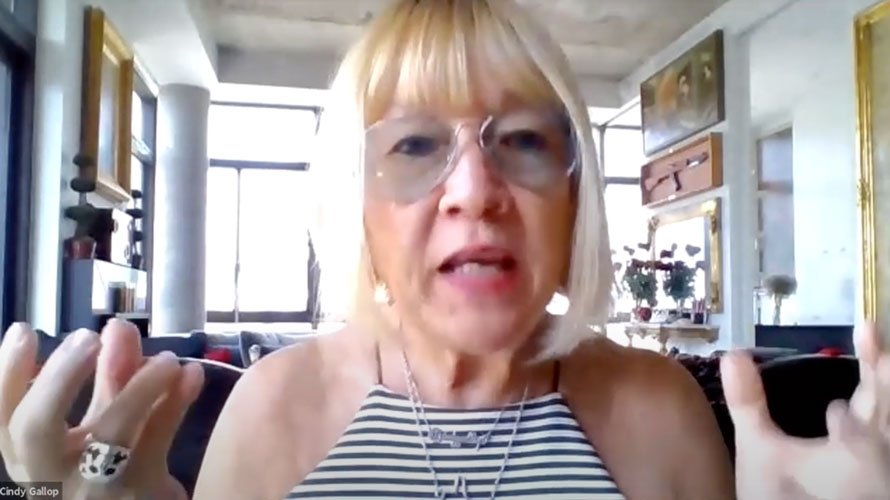 Cindy Gallop explained that Black colleagues shouldn't carry the burden of educating others on racism. Zeitguide

Amid million-dollar commitments to racial justice and diversity hire initiatives, agencies have been hosting and participating in panels to address racism. While some of these discussions have been fronted by Black and non-Black people of color, some have not, causing controversy within the business world of who can—or should—have a voice in these conversations.

One conversation in particular, a one-on-one livestreamed interview featuring Brad Grossman, CEO and founder of Zeitguide, and Cindy Gallop, CEO and founder of IfWeRanTheWorld and MakeLoveNotPorn, attempted to address this issue head on, but without any people of color present on the Zoom session also exemplified the very issue they were seeking to tackle. The discussions by Black leaders that followed pointed to how Black people shouldn’t have to bear the burden alone of educating white colleagues on racism, but their viewpoints should be present for a meaningful discussion.

Grossman, who hosts a Culture Class series that aims to “keeps leaders smart, culturally relevant and inspired to rebuild the future,” asked Gallop to join his latest session, “How to End Racism, Sexism and Ageism in the Corporate World.” Gallop, who is one of the leading advocates in the ad industry on those topics, sparked a heated back-and-forth ahead of the session with Piers Fawkes, founder of research and events company PSF. He did not think Gallop was qualified to headline the session, even with her ample experience in brand-building and in championing social justice, because the panel lacked someone who was Black to give a first-hand view of the industry’s problems.

Before the event, Fawkes explained in an email to Gallop and Grossman that neither of the panelists was “even remotely qualified to discuss this subject of racism alone” and that their insistence to have the discussion “smacked of white privilege.” “Please, please, bring on another person of color—or 2,” his email concluded.

Gallop addressed the criticism head-on at the beginning of the discussion and throughout her conversation with Grossman, as well as in a private email exchange with Fawkes, noting that Black people are exhausted and should not have to carry the burden of continuing to teach others about racism.

I know I retweeted this already, & I know I have a small presence on social media - but Idc, this entire thread deserves to be retweeted over and over. This is THE blueprint for the corporate world. Now I’m triggered from having too many flashbacks, gotta take a break. https://t.co/tLBpKu6MR2

Gallop explained that Black people have said repeatedly that it’s not their role to educate white people, and they especially don’t want to have these conversations anymore for free. “Black people are, quite rightly, now demanding to be paid for diversity and racism advice, education, counseling, speaking,” Gallop wrote.

Gallop said during the session that she is not white, she is biracial (half-Chinese and half-white), and has experienced racism during her career. She called for every single white person to be talking about how to end racism and the personal role they plan to play in that process, every chance they get. “There should be no other topic right now, in any forum, both public and private, whether professional or personal.”

Wow. Learning + amen with every sentence. @cindygallop is a leader + a voice we so need right now.

Gallop also outlined during the one-on-one livestreamed interview how hiring and promoting Black talent was key to driving enormous change and ending racism in the industry. Welcoming Black talent, Gallop explained, can equalize “the massive pay and wealth gap that is driven by racism” and prevent the “appalling racist assumption that the Black person is the coffee lady or the janitor.”