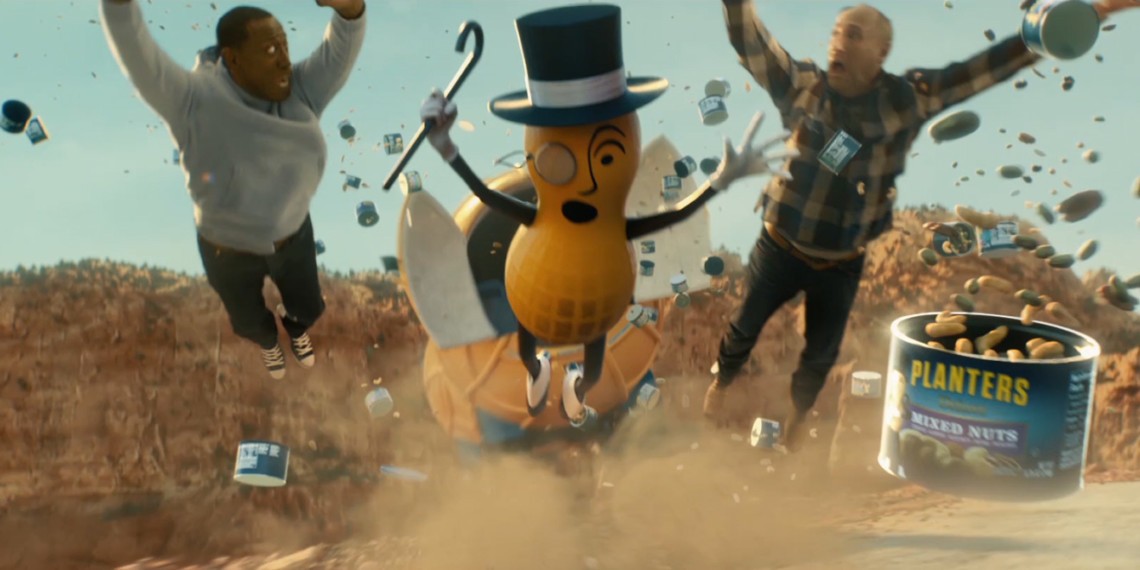 Mr. Peanut meets his demise in a Super Bowl teaser for Planters. Planters

After the death of Kobe Bryant, his daughter and seven others, Planters hit the pause button on its morbid Super Bowl campaign, which features the death of Mr. Peanut. The brand still plans on running its Big Game spot about Mr. Peanut’s funeral, but will not continue its paid efforts on Twitter and YouTube. The decidedly dark campaign is a gamble—death sometimes works (hello, Bud Knight) and other times doesn’t (hello, Nationwide child…and yes that’s two references to that child in two newsletters this week)—and what made it successful originally might also be its downfall. The campaign dominated Twitter last week, but Planters’ heavily promoted tweets about Mr. Peanut’s death weren’t a good look when juxtaposed against Twitter timelines filled with Kobe tributes.

One of the more fascinating stories we’ve produced about the Super Bowl is about the process agencies and brands go through to land a celebrity for the Super Bowl. This story pulls back the curtain on how The Marketing Arm, and Omnicom agency, helped secure 26 celebrities in 13 ads over the past two Super Bowls, including David Harbour in Tide’s iconic “It’s a Tide Ad” campaign.

Read more: Marketers explain how to best approach writing an ad with a celebrity, which breaks down into two schools of thought: write an ad so good that any celebrity makes it a winner or write a script specifically for a celebrity, but have a backup ready to go in case that script falls through.

We’ve run previous stories about how AI isn’t coming for copywriting jobs yet, but our Super Bowl pitch bot has proven AI has a long ways to go before taking the jobs of humans. While the bot has produced hilarious pitches, it tends to go down a dark, insane path featuring apocalyptic scenarios (and an oddly high amount of robot uprising pitches). That said, AI is catching marketers’ attentions because of its potential.

Read more: The story explains what else marketers need to know before trusting AI to produce brand safe results.

In the wake of Kobe Bryant’s death, brands like Nike (his current shoe brand), Adidas (his former shoe brand) and BodyArmour Sports Drink, which he once co-wrote a campaign for, paid tribute to the Black Mamba.

Read more: See how brands across the globe celebrated the life of one of the greatest NBA players to ever live.

Related: Following Bryant’s death, the Las Vegas Convention and Visitors Authority opted to delay the launch of its new campaign, which would have kicked off a new slogan. One ad within the campaign did air during the Grammys because it was too late to pull the spot.

How does your company help new parents?

As a company, we prioritize making the transition back to work as easy as possible for new moms and dads. In addition to paid paternity and maternity leave, we provide free milk stork delivery of breast milk for traveling moms. The program ships breast milk home from business trips at no cost to mom. We also allow for flexible work arrangements and work from home options as needed, allowing working families to attend doctor visits and adjust childcare schedules to suit their needs.

Publicis Health has a well-established Parent Transition program, designed to make the transition of returning to work after the arrival of a new child much easier. This program offers new parents a flexible return-to-work transition period during the first three months back to work. The policy allows parents to ease back into a full-time schedule, by slowly increasing the number of hours worked over a period of time.

Our agency provides complete flexibility in terms of working environment. We place trust in our people that they will get their work done and we don’t believe in policing by asking for butts in seats. We have also been known to set-up a coloring and giant post-it station in the corner of the office when someone needs to bring their toddler into the office for a couple hours. We all love the excuse to have a crayon debate with a three-year-old.