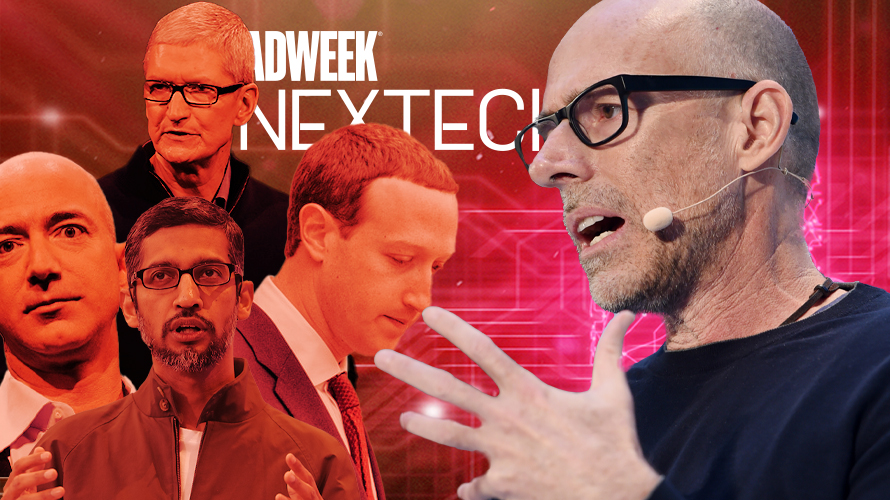 In their testimony on Capitol Hill Wednesday, the CEOs of Amazon, Apple, Facebook and Google made minor concessions that the scale of their operations and platforms meant they couldn’t guarantee practices that are deemed anticompetitive.
Nonetheless, Jeff Bezos, Tim Cook, Mark Zuckerberg and Sundar Pichai all maintained the argument that they count as American success stories operating in a competitive market.
Midway through the five hours of House testimony, Scott Galloway, professor of marketing at NYU Stern School of Business, addressed attendees of Adweek’s NexTech 2020 Virtual Summit.
Galloway, author of the bestselling book “The Four” about Big Tech’s dominance, shared his opinions on the proceedings and showed no mercy in his assessment.

The government got played

This was not the first time such actors have appeared in front of politicians, albeit it was the first time they appeared at the same time. In Galloway’s assessment, this was a deliberate ploy to hide in plain sight.
“The Big Tech executives were able to negotiate that they all showed up together, and there is safety in numbers,” he said. “They couldn’t really go that deep with anyone.”
He later went on to state that “people don’t understand the scale of these firms” and made some stark comparisons to illustrate his point.
“Google’s cash on hand is enough to buy Airbus and Boeing,” he said. “That’s just the cash they have on hand. In any given day or any given week, they basically lose or gain the value of the old titans WPP, IPG and Omnicom,” he added. “They’re really irrelevant at this point.”

Recounting his assessment of the early phases of the congressional proceedings, Galloway argued that the personalities of the individual CEOs played a part.
“What we’re seeing so far is the majority of ire; the fire is reserved for [Facebook CEO Mark] Zuckerberg because he’s the least likable,” he quipped.
Despite this, the “unholy alliance” between Zuckerberg and the Trump administration means Facebook should stay on course.
“I think the deal is very straightforward,” said Galloway, describing his interpretation of the scenario. Facebook lets Trump “weaponize and dispense hate” and in return, the administration instructs regulators to leave the platform alone.

Galloway also noted how Amazon CEO Jeff Bezos escaped relatively unscathed in the early proceedings—it took 96 minutes for legislators to ask him a question.
“There hasn’t been a single question towards Bezos yet,” Galloway said. “Because he controls more soft power than any entity in the world, with the exception of China … He owns the second-most powerful media company in terms of ensuring they [politicians] get to cling to what’s most important to them, power, in The Washington Post.”
Galloway noted how Sundar Pichai, CEO of Google-parent Alphabet and Tim Cook, CEO of Apple, were likely to sit on the sidelines and let the politicians pepper the other two with blows.
Although, he later went on to assess their business models, noting how one is evolving, and the other needs to divest.

Apple has been ‘recast’

He presented figures demonstrating how Apple was able to double its stock price over a period when it hadn’t released any significant new products.
“So, why has this company been recast? Simple, they have gotten the memo and they’re moving to a recurring revenue company,” he noted. “They now do almost one-in-four dollars in recurring revenue.”
Galloway later said, “Every company needs to launch pilot projects around a recurring revenue offering and if anything sticks, make that the fastest-growing part of your business.”

Later in the week, in its quarterly earnings update, Apple reported that “services,” such as Apple News+ and iCloud fees, generated 22% of its $59.7 billion revenue number for the period.

Politicians will never catch up with Big Tech’s engineers

Fielding questions from the audience, Galloway addressed how Google has been able to dominate online advertising through its intricate web of ad tech, a concern that politicians also raised on Capitol Hill.
In his assessment, Google needs to be broken up. Politicians simply lack the technical sophistication necessary to provide oversight to any self-imposed remedy the online giant may offer.
“They need to be broken up,” he said. “I think you have to sell the old DoubleClick unit, and I realize that’s untangling some spaghetti, and I think you have to spin [off] YouTube. … I just think their engineers are smarter than our regulators.”
Professor Scott Galloway was speaking at Adweek’s NexTech 2020 Virtual Summit. Click here for more insights shared at the virtual event.