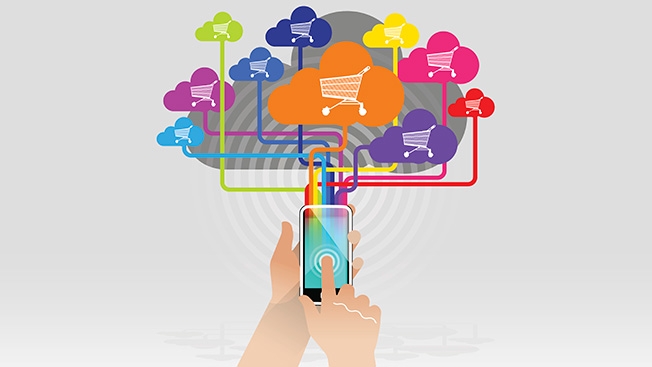 In today's world, smartphones help fill shopping carts made of either metal or code. Getty Images

While Foursquare yesterday unveiled an offline sales attribution program that grabbed the marketing world's attention, it's not the only player trying to make noise right now in the white-hot, digital ad measurement space. On Tuesday, tech companies Goodway Group and AdTheorent are announcing their own products that attempt to bridge the gap between digital promos and brick-and-mortar retail.

Goodway Group is debuting Validate360, which, like Foursquare's attribution program, offers control-group versus test-group analysis of how digital ads are performing. Jonathan Mellinger, vp of enterprise partnerships for the programmatic advertising company, said the system gives brands in-store results that depend on a mix of stats coming from a well of consumer activities.

"[We can] match those anonymous profiles to transactional or place-visit data sets to determine purchase or traffic lift and report back to our clients," he said.

"On the back end, there are different steps involved depending on what we are measuring—for instance, auto sales versus restaurant transactions," Mellinger continued. "As an example, in the case of restaurant transactions, let's say a user pays for a meal at a restaurant with his or her credit card. This user also logs into her credit card account both through her desktop browser and an app on her phone. Her account is now linked with those devices, so whenever she is served an ad on any of those devices, we can link that exposure back to a transaction."

For the system, Jenkintown, Pa.-based Goodway Group is charging a flat fee or CPM-based pricing, but it didn't offer specifics.

AdTheorent, meanwhile, is pitching its Barometric system as licensed software that agencies and brands can use in-house to track digital ads. It's designed to help marketers orchestrate ongoing optimization and campaign measurement in real time across devices.

Its chief selling point is matching multiple IDs to a single user, allowing marketers to know when a targeted consumer walks into a store thanks to that person's GPS data as well as AdTheorent's partnerships with beacon-technology players. Brands can also use the New York company's physical address feature—for instance, when an automaker's target consumers visit a DMV office, that tells the marketer to stop serving them ads since they've already purchased vehicles.

"Typically things like vehicle, retail or CPG purchases are tied to physical addresses," said Anthony Iacovone, CEO of AdTheorent. "Barometric brings us one step closer to truly measuring digital ad exposure at an individual level and attributing to an offline purchase."

Traditionally, retailers have had to wait weeks or months to sync credit card data with ad campaigns in order to judge performance. So players like Goodway Group and AdTheorent want to speed up offline data delivery and sell such a service to the advertising community—and they are not short on supply nowadays.

Foursquare seems to have raised the bar. Its new system, Attribution Powered by Foursquare, leans on a voluntary, nonincentivized panel of 1.3 million Foursquare users who have agreed to leave their location-sharing feature on at all times, meaning Foursquare knows every store they visit—even if they don't open the app or the company's sister app, Swarm. The relatively big panel appears to be a differentiator when it comes to other emerging products.

But Goodway Group, AdTheorent and Foursquare represent just the tip of the iceberg in the sector, with typically well-funded vendors like Placed, xAd, eXelate, Uber Media and PlaceIQ looming as competition. (PlaceIQ alone has raised nearly $52 million from investors, including $25 million last month.) And that list doesn't even include Facebook, Twitter or Google, which all have ongoing aims to connect online marketing with brick-and-mortar sales.