On that band life. 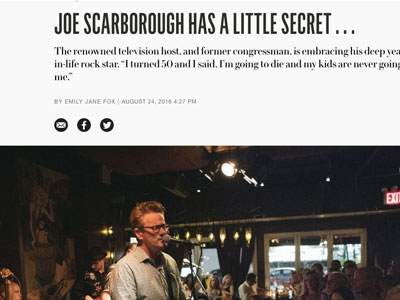 “Joe Scarborough Has a Little Secret” is the title of Emily Jane Fox‘s piece on the Morning Joe host, but no, Fox is not talking about Mika Brzezinski, Scarborough’s co-host who is rumored to be dating Scarborough.

The secret is Scarborough’s lifelong passion for performing music, passion so intense it made his other pursuits, like legislating, feel of much lesser import, as when he was a U.S. congressman representing Florida’s 1st congressional district.

Or maybe the secret is his fear of judgement. They overlap, anyway:

I asked him how someone who ran for office, who served in Congress, and who hosts a daily cable news show could possibly still claim to be scared of judgment. Without a beat, he responded that music is the only thing he has ever really cared about professionally. “When I was in Congress, there were about 10 or 11 of us who were holdouts, who didn’t want to send troops to Bosnia. We were in this room with the president, the vice president, the secretary of state, the secretary of you name it. I sat there and could not have cared less. It just wasn’t what I valued,” he said, evincing a dry humor that seemed designed to amplify his inner musician.

He has a band, Morning Joe Music, and while Fox covers a rehearsal and performance at Prohibition on New York City’s Upper West Side, she gets some Trump talk in there as well:

“What we did more than anything is we predicted the hurricane was coming,” he told me. “We didn’t cause it. We knew Trump. We liked him personally because he was always nice, not just to us, but to other people.” He continued: “We knew him as this generous guy. He would come to your book party and hold up the book and say, ‘This is the greatest book that has ever been written. You know, I’ve read thousands and thousands of books and this is the most important step forward in publishing.’ That’s what he did for people, and it’s kind of surreal for all of us to watch now.”

Hyperbolic flattery, it turns out, has as much appeal as hyperbolic fear-mongering, for the right audience.