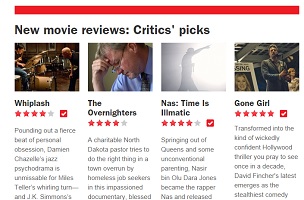 Today is Keith Uhlich’s last day at Time Out New York. And in film journalism terms, fall is generally a pretty good time to exit. Last week came Gone Girl; this week arrives another high-aiming adult drama, The Judge, heralding the debut of the production company created by Robert Downey Jr. with his wife.

When Uhlich recently announced his exit, he referenced another movie:

As Quint says in Jaws, “You all know me. Know how I earn a living.” I’m a film critic by trade, and my byline isn’t going to go away. I’ve promised myself that you’ll see at least a weekly post from me with thoughts on the movies. Writing reviews is a crucial part of my life, and I don’t ever want to give that up. It’s what I do.

On the freelance end, Uhlich has been recapping TV series The Knick for New York magazine. And on the Time Out front, the NYU alum tells us his final filed piece is a review of next week’s comedy-drama Rudderless directed by William H. Macy.

Uhlich, a member of the New York Film Critics Circle (NYFCC), had been with Time Out since February 2009.