Blogging platform Medium tries out custom domains. How you can drive leads with Tumblr. These stories, and more, in today's Morning Social Media Newsfeed. 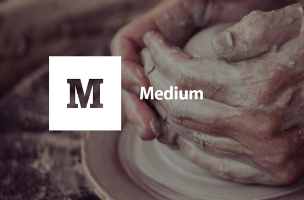 Medium is Testing Out Custom Domains (The Next Web)
Medium, the minimalist blogging platform, is taking on WordPress and Squarespace with a simple but important new feature: custom domain support. Only for some lucky publishers, however. Tech Times They include New America, Midcentury Modern, Substance and Medium’s own comics site The Nib. Publications interested in signing up for the beta can do so at Medium’s website. VentureBeat The new feature turns Medium into a far more formidable competitor to WordPress.com and Tumblr — this is particularly interesting when you consider Medium’s interest in replicating aspects of Tumblr’s feature-set. Ultimately this is part of a huge shift for Medium, as it evolves from designy blogging tool to social publishing platform.

How to Drive Leads with Tumblr (SocialTimes)
It’s pretty clear that Tumblr could be a useful platform, especially if your target audience is young. But if you’re like most marketers, you probably have no idea how to use it to drive sales and generate revenue.

Nine Pieces of Sage Advice From SXSW Veterans Who Have Seen it All (Adweek)
South by Southwest Interactive is set to get underway Friday, when more than 32,000 attendees will descend on downtown Austin, Texas, for a five-day festival of technology, marketing and digital life. Despite the fun — futuristic ideas, interesting people and brisket/tacos/booze — one might wonder if the hastle is worth it in the end. Well, some notable SXSW veterans say it definitely is.

Craft a Legal, Effective Employee Social Media Policy With These Five Steps (Entrepreneur)
Social media has the power to boost a brand’s image, reinforce relationships with customers and increase sales. When abused by employees, however, it can cause irreversible damage.

Facing Bans From Social Networks, Islamic State Starts its Own (The Wall Street Journal/Digits)
As they face regular bans and account suspensions from online media platforms like Facebook and Twitter, supporters of the Islamic State militant group have now decided to start their own social network. Enter 5elafabook.com, a Facebook-style knockoff site that appeared on the web for a brief period earlier this week before being shut down (the Twitter account linked to it has also been suspended).

ASO Isn’t SEO – and You Need to Know the Difference (SocialTimes)
If you haven’t heard of ASO — or App Store Optimization — it’s time to level up. Why? If you have an app and want to optimize it, you need to focus on mobile – and ASO takes over where SEO leaves off.