Former News of the World editor is the subject of conflicting Sunday reports. 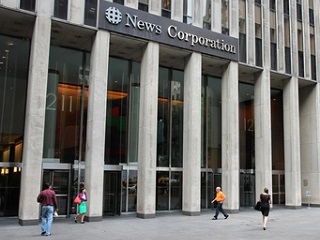 But exactly where and for which News Corp division depended Sunday on the report read.

According to the Daily Mail and, subsequently, The Guardian, Brooks has relocated to New York City with her husband and young daughter. All for the purpose of helping Murdoch identify online investment prospects.

However, later on Sunday, Financial Times global media editor Matthew Garrahan chimed in with a different set of specifics. He writes that Brooks will in fact remain in the UK to oversee Storyful, a site acquired by News Corp in 2013:

A recent visit to News Corp’s New York offices sparked talk that she would take a senior role with the company in the U.S.

However, two people familiar with the situation told the FT that Ms. Brooks would initially continue to be based in the UK but would spend time in Dublin at Storyful’s headquarters.

It’s worth also noting this paragraph further down in Garrahan’s item:

People familiar with the matter said negotiations about Ms. Brooks’ new role were ongoing and cautioned that the precise details of her job could change.

Brooks resigned from her News of the World position in 2011. Recent News Corp digital investments have included Move, Inc., Elara Technologies and bigdecisions.com.

Brooks has not yet signed a contract and there is no timeline in place, the sources said. Under the proposal, she was likely to be based in Britain and would work with Storyful, a 2013 News Corp acquisition that discovers, verifies and acquires news and footage on social media networks.

The head of Storyful will remain in place, the person said.