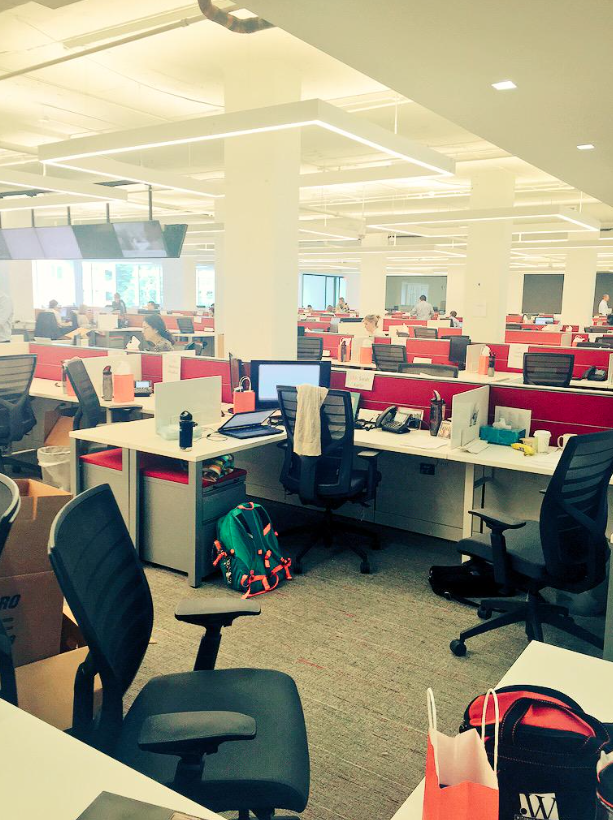 Because Politico has been hyping its editorial department’s new office space all day now on social media — using the hashtag #POLITICOMove — we wanted to see what all the fuss was about.

So, putting on our stalker-hats, we tracked several Politico staffer’s Twitter accounts for some shots of the new newsroom — admiring its classic red and white cubicles, yet spacious and naturally lit atmosphere.

Move-in day! Welcome to both the coolest and hottest newsroom in DC. #POLITICOmove pic.twitter.com/zQ1adXKkeV

FishbowlDC reached out to Kate Bennett, Politico’s gossip columnist who writes The KGB File, for her thoughts on the #POLITICOMove.

“It’s really pretty incredible,” Bennett told FBDC. “Just the planning of something as intricate and detailed as moving an entire news operation in one weekend deserves major kudos. As for the free snacks, the time I will save in not trying to feed wrinkled dollar bills into a vending machine alone is worth the price of admission.”

But one aspect of the newsroom, as Bennett highlights, has stood out among the Politi-ployees: the break areas (particularly the snacks).

Snacks, all the snacks. For the taking. PS: I see you, Cheetos. #POLITICOMove @politico pic.twitter.com/lXJ7TV3VY9 — Kate Bennett (@KateBennett_DC) June 15, 2015

Making sure everyone around the office knew that the move’s crown jewel was his brainchild, Politico publisher, Robert Allbritton tweeted:

Ok, I very rarely take credit for stuff, but the cafe / snacks: that was my idea from the beginning! #POLITICOMove

Overall, the editorial department seems pretty stoked about the move, with the modern newsroom offering massive TVs, more communal space for reporters as well as conference rooms and nooks for privacy on the phone.

“At the end of the day, Politico is a growing operation deserving of a fabulous new space – and thanks to the powers that be, we now have one,” said Bennett. “I can even vouch for the aesthetics. I wouldn’t change a thing.”

Politico’s senior defense correspondent, Phil Ewing, seems to have summarized it best in a tweet:

Staff consensus: The new #PolitiPalace is the greatest newsroom in the history of journalism. Especially the snacks. #POLITICOMove

Lesson to employers: snacks > everything.