Matt Bellassai goes from BuzzFeed to getting buzzed 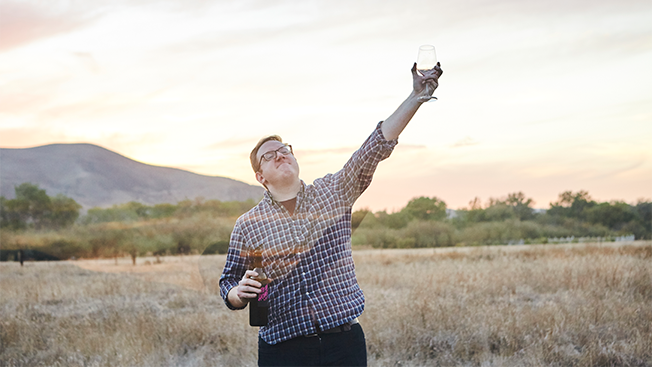 Matt Bellassai drinks an entire bottle of wine on camera each week for hundreds of thousands of fans.

"Everyone knows I don't know anything about wine, that's not a secret," said Bellassai. "Half the fun of my videos is watching me essentially chug the bottle without enjoying it at all."

There is a method to his madness, however. After getting through a good amount of the bottle at the start of his videos, he then starts in on a rant on the topic du jour. Usually, these are seasonal or pop culturally relevant; recent videos involve why "pumpkins are the absolute worst" or the worst parts of "living in a grown up apartment."

His video declaring why cats are the worst, a controversial topic by any measurement, was viewed by almost 3 million people.

Bellassai's show, titled "To Be Honest," launched on his Facebook page earlier this year after his departure from BuzzFeed where he hosted a similar show titled "Whine About It."

"I left because I wanted to have more ownership over my career and any projects I wanted to do," he said. "Most people wish they could down a bottle of wine and then complain for a while, but somehow I gamed the system into making that my profession."

Today, Bellassai is announcing his next big project.

He'll be partnering with Winc, formerly Club W, to produce and sell his own blend of wine, called "To Be Honest."

"We worked really hard to make a wine you could drink an entire bottle of in one sitting," he said.

"Matt was involved with the brand creation from the very start," said Sydney Munteanu, director of product marketing with Winc. "He worked with our team to come up with a label design, tone and message that would resonate with both audiences."

And of course, he was involved with the actual taste-selection of the blend itself. Sometimes Winc would hold virtual wine tastings with Bellassai by "overnighting him bottles straight from the winery that were blended the day before since he was on the road for his 'Drunk and Alone' tour," said Munteanu.

"I wanted to make 'not the wine snob's' wine," said Bellassai.

Bellassai and Winc even worked together to create a mini web-series called "Making of a Master." Clearly, Bellassai is no classically trained sommelier. The scripted comedy series gives him 24 hours to become just that.

Ryan Zotovich, Winc's head winemaker, and Brian Smith, Winc's chief wine officer and co-founder, "had the most fun teaching Matt about the whole winemaking process while also filming with him in Santa Barbara County," said Munteanu.

"Now I know that the awful face I make when I drink certain wines is because they're high in tannins!" said Bellassai, who's proud he learned even a little bit more about wine. Zotovich and Smith had their work cut out for them.Winc

"Nobody knows what they're talking about when it comes to wine," he said. "But it's one of the oldest drinks in the world with a huge history."

Bellassai's other brand partnerships were only ones that felt natural to him. His partnerships usually have a heavy dose of creativity mixed with a product he would also enjoy. He even got to go to London to make a video promoting Bridget Jones's Baby while working with Universal Pictures.

"Fans expect certain things, like having us not suddenly becoming NASCAR with ads all over," said Bellassai.