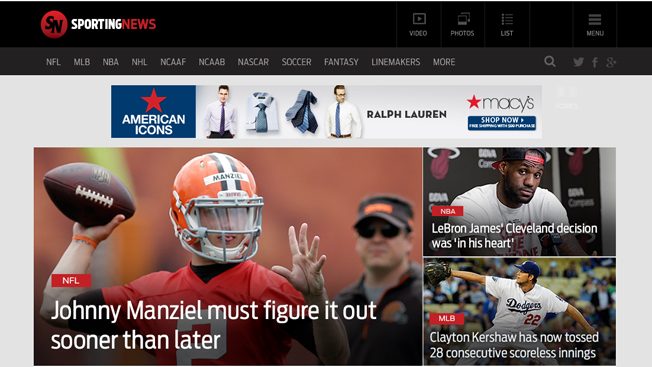 Fox Sports Digital and Sporting News Media are teaming up in a bid to take a bigger slice of the online audience.

The two companies said Monday that they would partner under the name, Fox Sports Digital—Sporting News Media, to share both content and traffic, and are projected to reach an audience of 55 million fans monthly. Sites that fall the new banner include FoxSports.com, SportingNews.com and Goal.com.

"It's a commercial partnership, but it's been driven by product development," said Juan Delgado, CEO of Sporting News Media. "We're hoping to entice the interest of ad buyers and sports fans across the U.S."

Based on June 2014 comScore numbers, FoxSports.com is the fourth most visited sports site by U.S. users, while Sporting News Media (which is part of the PERFORM Group company) is seventh. Combining their resources is expected to boost average numbers to at least the third most popular spot, according to Sporting News Media chief revenue officer Rich Routman. He said that with football season approaching, the numbers will rise.

Under the agreement, editorial content produced by either company can now appear on any of their sites. The partnership is rooted in the digital realm, which means viewers won't see Sporting News Media call-outs on TV. However, the sites can feature clipped videos and other digital clip assets that may have been featured during the broadcast.

In addition, Fox Sports Digital and Sporting News Media will create joint web videos and other projects, including branded content. While no deals have been unveiled, Delgado said the media organizations are in talks with a major football sponsor.

Fox Sports Digital svp Marla Newman said the new partnership will be particularly useful during major sporting events like the NCAA's March Madness, where both parties aren't the official rights holder. She hopes their larger combined audience will give marketers an alternative option to place their campaigns.