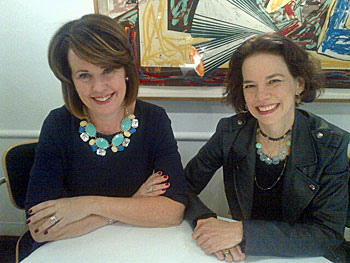 Those movers and shakers not on Harvey Weinstein’s Oscar party list (our invite must have gotten lost in the mail), made it to Michael’s for the weekly Wednesday lunch. There was plenty of action in the dining room with talking heads (Alina Cho, Rikki Klieman) and media mavens (Desirée Rogers, Moira Forbes) among a sea of suits and strivers hatching their next big deal.

I was joined today by Dana Cowin, who has been Food & Wine’s editor-in-chief since 1995 and is considered one of America’s foremost authorities on  — what else? — food and wine.  Interestingly enough, she told me she didn’t grow up in a “foodie” family and only considers her culinary skills “intermediate — I still make a lot of mistakes.”

Last year, Dana published her first cookbook, Mastering My Mistakes in the Kitchen: Learning to Cook with 65 Great Chefs and Over 100 Delicious Recipes (Ecco Press) which was named one of the 10 most notable cookbooks of the fall by Publishers Weekly.

“I’ve had my name on five other books since I’ve been with the magazine but this is the first time I did all of it — from the head notes to the recipes — of course, I had help from all the great chefs,” she told me. Having grown up wanting to become a writer, Dana toiled at Vogue and HG Magazine before landing her current gig, which seems to fit her perfectly. “It’s all joy!” she enthused. Dana is the face of the Food & Wine brand and as such, has a jam-packed calendar. Besides her role at the magazine, she oversees the digital products including the website, as well as the digital-only FWx for millennials, mobile applications and tablet editions. In addition to her day job as EIC, she manages to squeeze in appearances on Bravo’s “Top Chef” and a pretty impressive travel schedule that takes her to all over the globe in search of what’s new, next and best in the food world. She recently traveled to Japan — for one day — to eat in the Tokyo pop-up version of Noma, the famed two-Michelin-starred restaurant helmed by René Redzepi, “the number one chef in the world.” The verdict: “It was amazing.”

Between bites of Dover sole we discussed the emergence of food as a source of entertainment thanks to the world of reality television and the emergence of the celebrity chef. We also discussed how a once-insular industry has grown much more egalitarian. “It’s such a passion and obsession for so many people now,” Dana told me. “Way back when it was a cabal.” Dana is certainly doing her part to bring the secrets of great meals to the masses, with a slew of events where she often takes to the stage and cooks with a famous chef or hosts a panel where fellow foodies reveal tasty tidbits about the business. Next Thursday she’s off to the South Beach Wine & Food Festival (Food & Wine is a sponsor) where, when she’s not hosting panel discussions or talking about her book, she’ll be “scouting talent and restaurants” looking for the next “rock star.” Later this year she’ll do the same in Cancun, Austin and Pebble Beach.

I was very intrigued by yet another (chef’s) hat Dana wears — that of Chief Talent Scout for Chefs Club USA, a restaurant group that features the dishes of Food & Wine Best New Chefs. The first location was opened at the St. Regis Aspen Resort in 2012, showcasing the signature dishes by the winner of Food & Wine‘s prestigious Best New Chef Award. Last fall a 120-seat restaurant, (“It’s very romantic”) designed by celebrated architect David Rockwell opened here in town on the ground floor of the Puck Building in Nolita. “It’s the most amazing thing to able to bring all that talent and all that passion from all over to one restaurant,” said Dana. The four selected chefs’ dishes are featured for one year and are chosen from “hundreds of places.” The chefs selected for the New York City launch were Lachlan Mackinnon, Gabriel Rucker, Linton Hopkins and Erik Anderson. All are slated to make appearances at the restaurant over the course of the year.