Christiane Amanpour: ‘I Believe in Being Truthful, Not Neutral’ 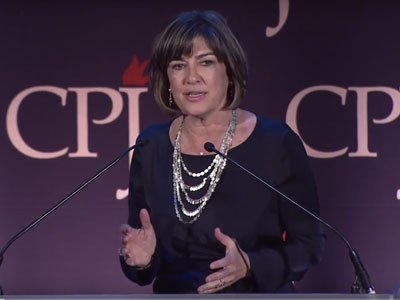 “I never in a million years thought I would be standing up here on stage, after all the times I participated in this ceremony, appealing, really, for the freedom and safety of American journalists at home.”

The ceremony was last night’s Committee to Protect Journalism’s 2016 International Press Freedom Awards, and the speaker was CNN chief international correspondent Christiane Amanpour, accepting the Burton Benjamin Memorial Award, which, as the CPJ describes it, honors “extraordinary and sustained achievement in the cause of press freedom.”

“I had actually hoped that once president-elect, all that would change,” said Amanpour of Donald Trump and his relationship to First Amendment freedoms, “and I still hope that and am confident that is going to come.”

What followed that touch of hopefulness, however, was a warning about paying attention to warning signs, an assessment of the practice of journalism and a current events accounting of press suppression around the world. “We are not there yet, but, everybody, postcard from the world: as you’ve seen tonight, that is how it goes with authoritarians around the world like Sisi, like Erdoğan, like Putin, like the Ayatollahs, Duterte in the Phillipines, and all of those people,” she said, referring to the authoritarian leaders of Egypt, Turkey, the Russian Federation and Iran, respectively.

“And as all the international journalists in this room who we honor tonight know only too well, and who we honor every single year: first the media is accused of inciting, then sympathizing, then associating–and then suddenly they find themselves accused of being full-fledged terrorists and subversives. And then, they end up in handcuffs, in cages, in kangaroo courts, in prisons–and then who knows what?”

“A great America requires a great and free and safe press,” Amanpour went on to say, a line met with applause from the room.

“Tonight, above all, it’s really an appeal to protect journalism itself.” The appeal, as Amanpour described it, was not just a call for a top-down protection of press freedom, but from within as well:

To recommit to robust, fact-based reporting without fear and without favor–on the issues.

Don’t stand for being called, or being labeled, crooked or lying or failing. We have to stand up together, because divided we will fall.

There was more, observations which accounted to a reckoning for the media:

It also appeared, that much of the press, much of the media, was tying itself in knots trying to differentiate between balance, between objectivity, neutrality, and crucially, the truth.

We cannot continue the old paradigm, we cannot, for instance keep saying, like it was over global warming, where 99.9 percent of the science, the empirical facts, the evidence, is given equal play with the tiny minority of deniers.

I learned a long, long time ago, when I was covering genocide and ethnic cleansing in Bosnia, never to equate victim and aggressor, never to create a false moral or factual equivalence, because then, if you do, particularly in situations like that, you are party and accomplice to the most unspeakable crimes and consequences, so I believe in being truthful, not neutral.

I believe in being truthful, not neutral. I believe we must stop banalizing the truth.

We have to be prepared to fight especially hard right now for the truth, because this is a world where the Oxford English Dictionary, just last week, announced its word for 2016, and this is “post-truth.”

You can watch the entire speech below, or go here for a transcript of her prepared remarks.