A Major Metropolitan Newspaper, Acquired for the Price of a Single Print Copy

At the top of Thursday’s Chicago Sun-Times front page, the nameplate reads, per usual: ‘$1 CITY/BURBS $2 ELSEWHERE.’ What’s less usual is that the new ownership deal for the paper and alt-weekly the Chicago Reader, also noted on the July 13 front page, was done for the ‘CITY/BURBS’ amount. 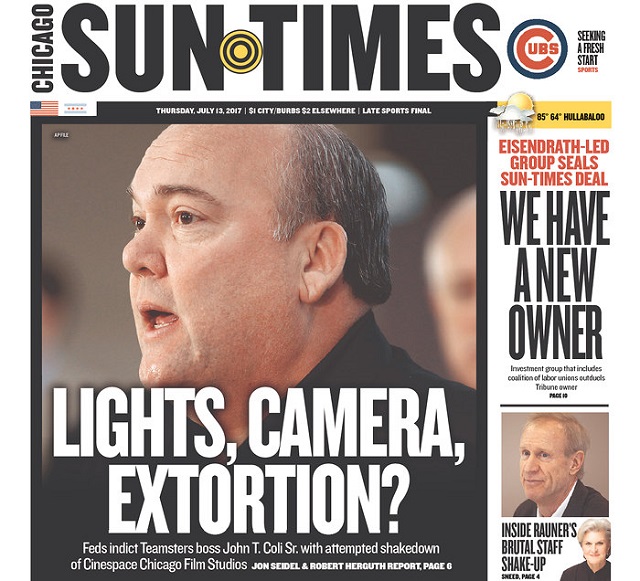 It’s a startling detail about a deal consummated in the third largest media market in the U.S. by a former city alderman, Edwin Eisendrath, in partnership with the Chicago Federation of Labor. One you have to scroll pretty far down in the Sun-Times report by Sam Charles about this news to get to:

The new owners wouldn’t discuss the terms of the acquisition Thursday, but a source involved in the transaction said the purchase price of Sun-Times parent Wrapports LLC totaled only $1, the cost of a single copy of the paper.

ST Acquisition Holdings LLC won over the U.S. Department of Justice’s Antitrust Division — which is responsible for investigating newspaper mergers and oversaw the sale — by securing more than $11.2 million in operating funds to bankroll the company for an undisclosed period.

So there is that caveat. While the purchase price for Wrapports LLC is just a dollar, the required additional funding that had to be secured makes the transaction ultimately worth $11,200,001. Still not a whole heck of a lot for a daily newspaper that dates back to 1844 and an alt-weekly launched in 1971.

Reaction on Facebook and Twitter to Sun-Times postings about the deal was less than voluminous. However, one reader comment at the Facebook end reminds of both the demographics of many of today’s print newspaper readers and the core support base for a second daily in Chicago:

Ray Morrow Jr.: I’ve been reading the Sun-Times since it was just the Sun back in the late 40’s. You’ve got great columnists and reviewers. Please don’t tinker too much. Please!

A key element of the new owners’ strategy is that they plan to relocate the Sun-Times to cheaper physical headquarters. When the lease expires on the paper’s current space in November, the paper and the Reader will be bundled into 30 N. Racine Ave., where Answers Media, also acquired by the group, is located. That company, which promises ‘Creative Content Production,’ has done work in the past for Toyota, the Chicago History Museum and the University of Illinois at Chicago.

Leading up to this week’s deal, Chicago magazine columnist Carol Felsenthal had an interesting look at Eisendrath. Way back in 2000, she researched a deep profile of his mother, Susan, and stepfather, Lewis Manilow:

During the campaign [for city alderman in 1987], Eisendrath was portrayed as an entitled rich boy whose parents were intent on buying him a City Council seat. His opponent was Robert Perkins, a young lawyer and former aide to Abner Mikva. Pundits dubbed the race “The Battle of the Blue Bloods”–two fancily educated bankers’ sons duking it out. It was then the most expensive ward campaign in Chicago history. …