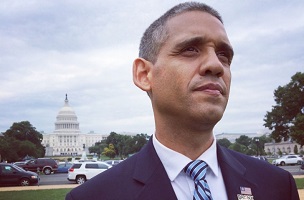 Australia holds a special place in President Obama impersonator Louis Ortiz‘s heart. It is, after all, the land where he has met both the fake and then the real Dalai Lama, in Sydney and Perth respectively.

Ortiz and documentary filmmaker Ryan Murdock are busy these days doing publicity for Bronx Obama, their film festival hit that is set to debut on Showtime at the end of the month. Last week, Ortiz Skyped in to TMZ Live; this weekend, it was time for he and Murdock to chat with the hosts of Australian morning TV show Sunrise on 7.

Murdock’s feature documentary debut has the filmmaker exploring a topic previously documented for both This American Life and the New York Times website. Prior to starting his own company, Murdock worked for PBS’ Nova series and the NPR oral history project StoryCorps.