A Year Later, Suge Knight Is in Jail and Brian Williams Is Off the Air

Things that make you go hmmm 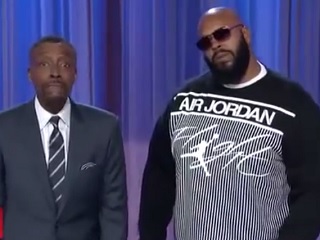 When Suge Knight, on behalf of talk show host Arsenio Hall, demanded in February of 2014 an apology from Brian Williams, no one could have guessed how dramatically things were going to veer from there. Not to mention coincidentally.

On Jan. 29, 2015, Knight was involved in a fatal hit-and-run in Los Angeles and is now charged with murder. On that same day in New York, Williams accompanied U.S. military veteran Tim Terpak to a Rangers hockey game; his subsequent NBC Nightly News report about the excursion is what lit the match, via Facebook.

A year ago, Knight ignored the prepared joke and went off-script next to Hall, framing the omission of Arsenio from an NBC Nightly News item as being like an east coast-west coast rap rivalry. The report, for which Williams quickly apologized, was related to the debut of The Tonight Show Starring Jimmy Fallon and the history of late night hosts.

Hall was canceled after a single season while Fallon, as we all know, has triumphantly re-attached the Tonight franchise to the east coast. In the days of Jay Leno, several people famously went on the show for Mea Culpas, most notably Hugh Grant and Kanye West. Even in the short time that Fallon has been manning The Tonight Show controls, Jonah Hill has done the same, apologizing for a gay slur hurled at the paparazzi.

Will Williams be back on The Tonight Show in the coming days as part of a last-ditch PR campaign to save his anchor job? Hard to say. But one thing’s for sure; silly rap videos starring Williams are now going to be authored by YouTube users rather than the anchor’s 30 Rock colleagues.