On the cusp of NBC's coverage of Rio, some fun memories from a FishbowlNY reader. 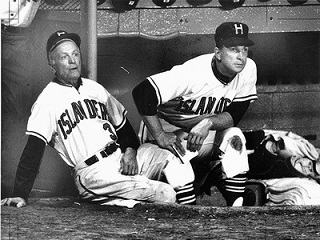 It’s been some time since faithful FishbowlNY reader Marty Chase saw Al Michaels in person. It was several decades ago, when Michaels was honored as Sportscaster of the Year at a ceremony at the QB Club in Washington, D.C.

When Chase tunes into NBC’s coverage of the Summer Olympics from Rio and hears the voice of eminently qualified daytime host Michaels, he will think back to that D.C. event, as well as the time in 1977 he sat in with Michaels and Lon Simmons at Shea Stadium during a Giants-Mets game. Inevitably, Chase will also recall events in Honolulu from the previous decade.

As detailed in Michaels’ 2014 autobiography You Can’t Make This Up, Chase, then an active military reservist, was called away from his duties as play-by-play man for Triple-A minor league baseball team the Hawaii Islanders. From afar, Michaels was recruited to step in.

“At the Washington D.C. event, I somehow wound up at the head table, with several politicians and local luminaries,” Chase tells us. “I spoke with Michaels that night and we joked about having to pronounce all the Samoan and Hawaiian athlete names. Al of course nailed that. Yours truly stumbled a bit.”

As Michaels boarded a 1968 flight to Hawaii from Georgia, where he was working at the time for Chuck Barris, he gave himself a pep talk for a job that would quickly lead to a second one with an island TV station. Coincidentally, the person at the center of that internal dialogue is this year wrapping up their own mighty broadcasting career.

From the aforementioned autobiography, co-written with SI’s Jon Wertheim:

Just sound like Vin Scully. That’s what I told myself on the flight to Hawaii. I had heard Vin’s voice in my ears since I was six. The authority, warmth, knowledge, creativity and maybe most important of all, the rhythm.

The Islanders were part of the Pacific Coast League 1961 to 1987. They were, previously, the Sacramento Solons and, once moved back to the mainland, became known as the Colorado Springs Sky Sox.