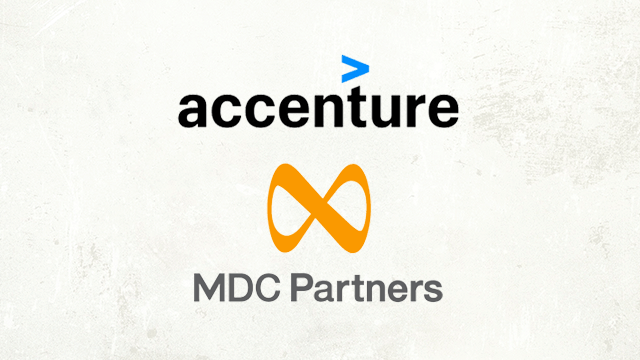 This marks the second time in two years that MDC has explored a sale.
Getty Images
Share
By Patrick Coffee
|
December 5, 2018
Share

International global management consultancy Accenture is reportedly among a small group of bidders seeking to acquire ad agency network MDC Partners and its 50-plus properties around the world.

Those properties include such agencies as Anomaly, Crispin Porter + Bogusky, 72andSunny, Assembly and Forsman & Bodenfors.

According to a source with direct knowledge of the matter, the deadline for bids was late November. The same source said Accenture is one of three finalists.

Media and telecoms-focused investment bank LionTree Advisors is overseeing the process, which was first reported in September by The Wall Street Journal. JP Morgan Chase is providing assistance, according to another source with financial ties to the business.

“There are always rumors in the marketplace, and we do not comment on them or engage in speculation,” said an Accenture representative.

LionTree and hedge fund FrontFour Capital Group, which made headlines for filing an SEC complaint against MDC’s board of directors on Nov. 19, have not responded to multiple requests for additional information.

SEC reporting laws prohibit all involved parties from commenting on an active bid to avoid granting any given company unfair advantage.

This is not the first time MDC Partners, which is currently more than $1 billion in debt, has explored the possibility of an outright sale. In 2016, the organization worked with LionTree and JP Morgan to land a $95 million equity investment from Goldman Sachs.

Since then, many within the industry have speculated as to whether MDC would sell itself, in whole or in part, to an outside investor. Several recent reports named consultancies like Accenture, Deloitte and Bain Capital as potential buyers. A source close to MDC Partners echoed these thoughts and told Adweek that the bids were almost certainly for the entirety of the company, with the understanding that its final buyer would then go through a round of “pruning” to streamline the network.

The fact that multiple agencies (including 72andSunny and Doner) have recently attempted to buy themselves back, only to have their offers rejected by the MDC board of directors, supports this theory.

The party close to MDC called Accenture “the best bidder,” citing its “synergies” with the agency network and its proven ability to cut costs.

MDC Partners’ stock has lost a majority of its value this year and is currently trading at distressed levels.

The deal would also be in keeping with Accenture’s increasing moves into the creative marketing space via its Accenture Interactive division. In recent years, the division has acquired a series of primarily mid-sized shops around the world, including Australia’s The Monkeys, England’s Karmarama, Germany’s Kolle Rebbe, Brazil’s New Content, Meredith Xcelerated Marketing of New York and many more.

A recent Adweek profile of Accenture Interactive CEO Brian Whipple described the company as “the world’s largest digital agency.” However, some advertising executives have disputed the idea that Accenture can compete directly with traditional shops for creative or especially media accounts as long as its primary consulting division is simultaneously auditing their clients’ businesses.

In response, Accenture’s head of programmatic said it would never be in a position to audit its own work.

The company clearly aspires to expand into all areas of the marketing business. A source within Accenture Interactive told Adweek that it’s currently in talks to acquire a business that specializes in helping advertisers scale and measure paid social media campaigns.

The company in question did not immediately respond to a request for comment.

Disclaimer: Accenture is an Adweek sponsor.