72andSunny Los Angeles is behind the effort 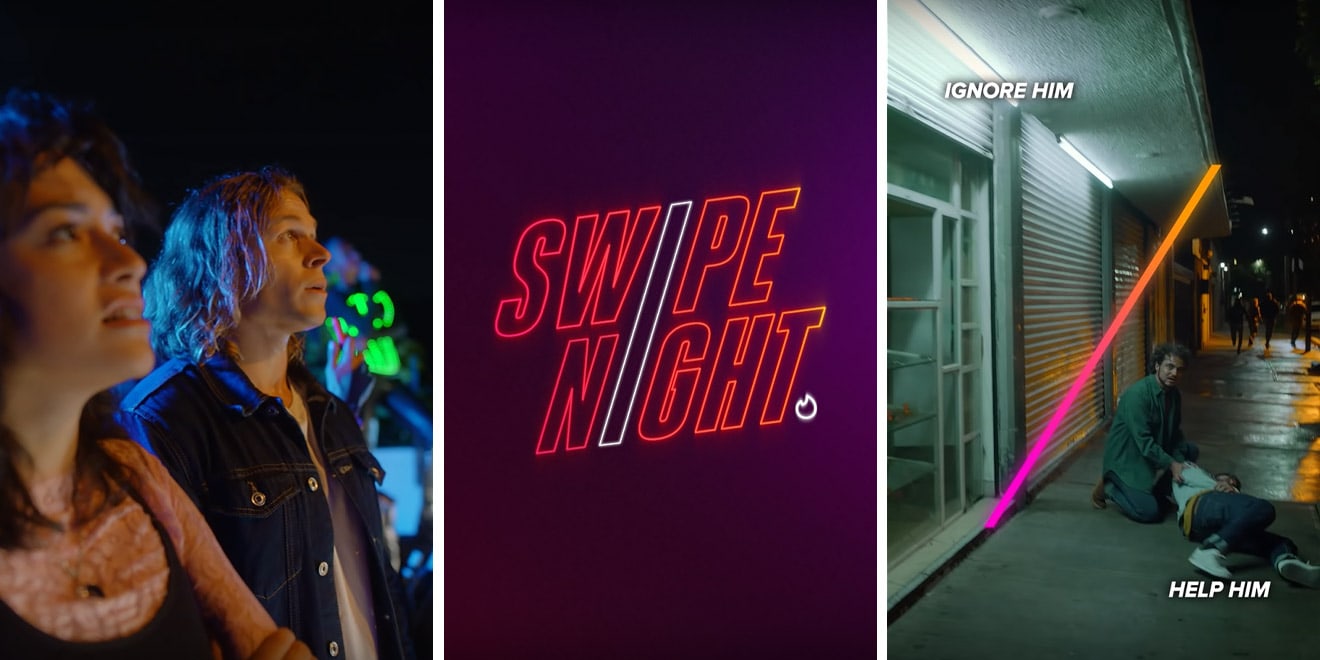 After much hype, Tinder today debuted Swipe Night, an interactive digital experience that will greet users every Sunday night this month when they open the dating app.

Here’s how it works: users who opt to participate in Swipe Night will join a party that quickly devolves into apocalyptic chaos. Using the app’s swipe feature, they’ll be asked to make a number of choices that determine what happens next, and are only given seven seconds to make each decision.

Some of the choices are fluffy, while others veer into moral territory—for instance, at one point, users are asked to decide whether to help or ignore an injured man lying on the sidewalk.

Installments of the series, which are each roughly five minutes long and feature a group of friends played by Angela Wong Carbone, Jordan Christian Hearn and Shea Vaughan-Gabor, will be released each Sunday between 6 p.m. and midnight.

According to Tinder, Swipe Night is more than just a foray into original content. After each release, Tinder members can choose to display three of the choices they made in their profile on the app. They will then be matched with others who also interacted with the experience, the idea being that their choices will serve as conversation starters.

“Sometimes it’s hard on Tinder to know exactly how to break the ice,” Jenny Campbell, chief marketing officer at Tinder, said. “Because you’ve now gone through this shared experience, you have so much more to talk about.”

Swipe Night is aimed at Tinder’s youngest users—ages 18-25, most of whom are members of Gen Z—who Campbell said make up half of the app’s user base. Considering Gen Z is “incredibly marketing savvy,” Campbell said Tinder wanted to create something that would not only resonate, but also tie into the app itself and make it easier for single people to connect.

The hope is that it will result in a higher match rate and more conversations on the app.

“The best kind of marketing doesn’t just tell a consumer how great a brand is, but actively helps that consumer and their goal, whatever that goal might be,” Campbell said.

Matt Murphy, executive creative director and partner at 72andSunny Los Angeles, said that Swipe Night has been in the making since the beginning of this year. Putting the experience together involved collaborating with Tinder’s marketing and product teams to ensure that it would level up to something valuable for users.

“This wasn’t just gratuitous storytelling. We’re not [just] going to get credit for inventing an interactive experience,” Murphy said. “We thought it would be an awesome storytelling mechanism to allow [the viewer to] make choices that could propel and drive the storyline forward. Rather than making ads about telling people what they should be doing, we’re creating experiences that are leading people towards what could be. This is adding a new possibility of who you can match with and why.”

As for the apocalyptic theme, Murphy said that they wanted the storyline to be rooted in a “heightened reality” with the right amount of edge.

“Day by day, our ambition really just kept elevating,” Murphy explained. “We had a lot of story ideas in mind, to be honest. The apocalypse idea came from paying attention to what’s going on in the world. There is a little bit of a collective feeling of like, ‘everything’s just a little bit too crazy.’”