See the work that elevated storytelling and drove the conversation It’s that time. We’re looking back at the best ads of 2018, a year when marketing truly ran the full spectrum, from silly and sarcastic to weighty and wonderful.

With all the industry hand-wringing of late about whether creative agencies are a dying breed, one might have expected a drought of ambitious advertising in 2018. Instead, we saw that when bold marketers put their faith in provocative agencies, they can create work that doesn’t just reflect culture but also drives it forward.

As a reflection of how much great work there was to talk about this year, we’re expanding our usual Top 10 list to a Top 25, and we’ll be creating a separate list just for our favorite stunts, activations and innovations. These print and outdoor ad images are classic art direction at its best: simple in concept, flawless in execution and (once you catch the concept) impossible to stop staring at. By replacing the fire in different images with KFC’s Hot and Spicy fried chicken, Ogilvy Hong Kong created a campaign that sparked praise among consumers and creative peers alike. While Ogilvy didn’t invent the idea of using fried chicken as fire (a technique that’s been popping up in different parts of the creative web for years), they certainly cooked it up perfectly. The story of a young refugee who escaped Syria in a wheelchair is an incredible one to hear or read—but to see the young woman herself, Nujeen Mustafa, re-enacting her impossible odyssey is something truly special. Nat Geo and agency 72andSunny made it happen, thanks to Mustafa’s extensive cooperation and the powerful storytelling of director Reed Morano, best known for her work on The Handmaid’s Tale. “I wasn’t supposed to see the bright side of my journey,” says Mustafa, who has cerebral palsy, in her narration of the spot. “So I made it an adventure, and discovered all sorts of new things.” The debate over the destructive role of single-use plastics on ocean life reached critical mass this year, with major brands including Starbucks pledging to phase out plastic straws. Perhaps the most powerful visual to make the case for this consumer shift came from Greenpeace Canada and agency Rethink, whose print ads feel like a punch in the throat to each viewer. It’s a powerful, unforgettable image—and one that sadly isn’t hyperbole. Promotional videos for film festivals have become some of the most fun and freaky ads in recent years, and Newport Beach Film Festival has certainly been one of the leaders in the trend. For this year’s festival, director Jillian Martin created a mini-masterpiece with “Quota: Who Made the Cut.” It’s a fantastic feat of short-form storytelling with an ending that … well, let’s just say it makes its point in a way you won’t forget. Martin was featured on this year’s Adweek Creative 100 as an emerging director to watch.

While “Dilly Dilly” may have been a dominating force in both advertising and pop culture this year, picking a best ad is a challenge. Bud Light’s Super Bowl outing, “Bud Knight,” was memorable and featured the dry wit and subtle acting that have made the campaign a hit. But for our money, the best spot was “Oracle Susana,” created with a clever blend of Spanish and English aimed at appealing to World Cup audiences. The ad isn’t just funny and memorable; it also showed that the Dilly Dilly campaign still had quite a lot of area to explore. At Adweek’s Elevate: Creativity event earlier this year, Wieden + Kennedy New York ecd Karl Lieberman said the creative team behind the ads pictures the campaign taking place on a map similar to the sprawling geography of Game of Thrones. “Oracle Susana” was the first foray into this wider world.

20. Monoprix | “The Worst Song in the World”
Agency: Rosapark

Imagine being presented with this creative challenge: Write a song that’s so bad, it could believably called “The Worst Song in the World.” But don’t make it so bad you can’t listen to it all the way through. In fact, try to even make it addictively catchy in the way only truly great bad songs—”We Built This City on Rock and Roll,” “The Final Countdown,” etc.—can be. French agency Rosapark and its production partners were up that challenge, crafting a hilariously awful track for grocery chain Monoprix. The gag is that the ad’s protagonist can’t stop listening because her hands are full of grocery bags—which they wouldn’t be if she used the delivery service being advertised. But even if you don’t remember the payoff, you’ll always, always remember the song.

Unquestionably, 2018 was an amazing year for Apple’s creative marketing, as you’ll see more than once again in this list. One exceptionally crafted piece that’s often overlooked, though, is one made by production house Furlined to launch the iPhone X. With a breathless pace and effortless style, “Unlock” is a feast of visual popcorn as a young woman learns that her glance can unlock the new iPhone—and maybe everything else? 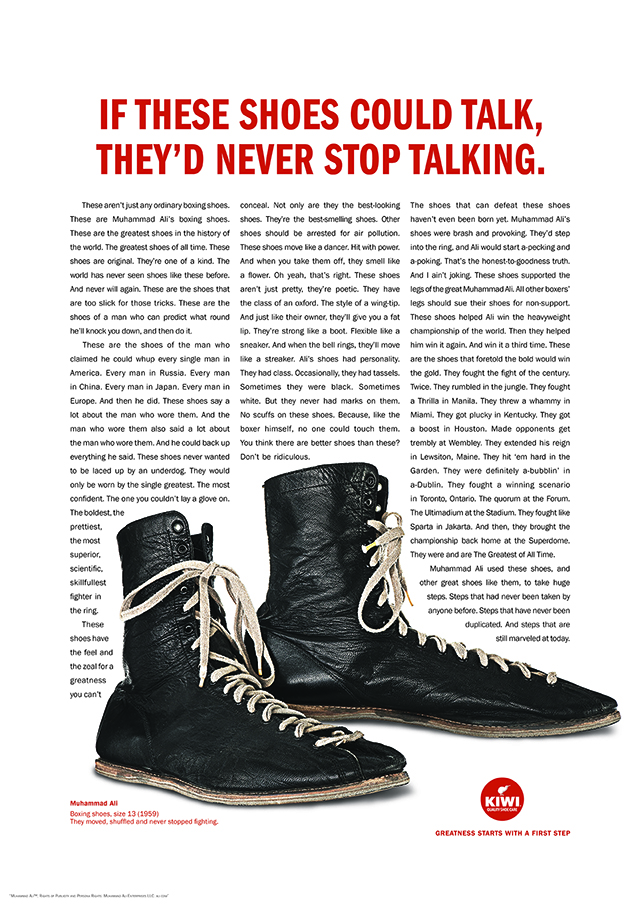 There’s a certain subset of advertising lovers who will always fetishize long-form copy, but in truth the format is often frought with self-indulgence and an eye-rolling level of earnestness. But long-copy skeptics and believers alike can agree on Ogilvy Chicago’s fantastic series of print ads for shoe polish brand Kiwi. Each shows the real footwear of a famous figure, along with a detailed story about the first steps that took them on their history-making journeys. In a world where ads are lucky to get your attention for 6 seconds, these are worth enjoying in every fascinating detail. 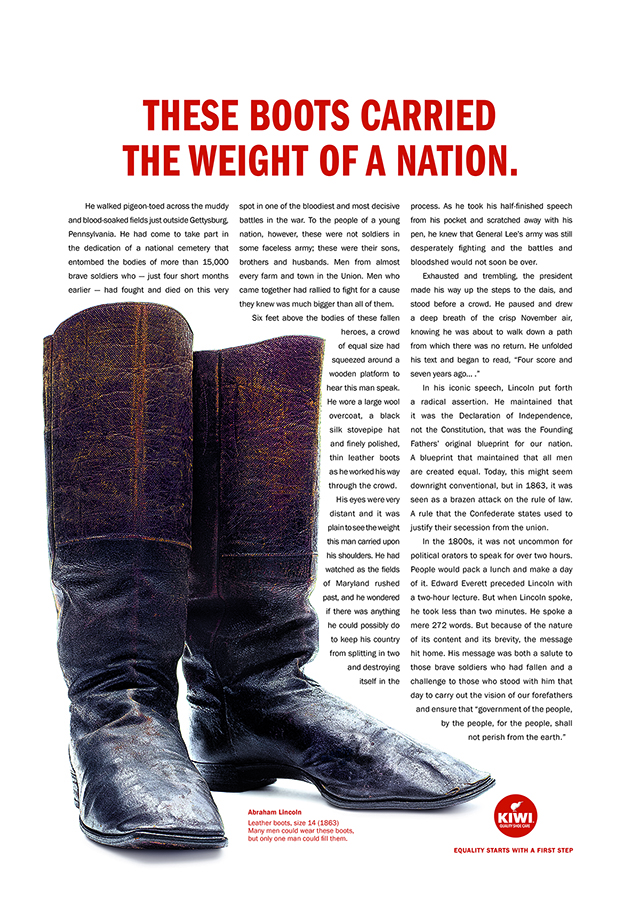 The wave of Democrats who ran for office in 2018 will likely be best remembered for regaining control of the U.S. House from the Republican majority, but they’ll also have another legacy specific to the world of political advertising. It was an incredible, revolutionary year for grassroots political ads that came in all shapes and sizes, but with one recurring theme: they created an instant, emotional connection between the viewer and the candidate. Alexandria Ocasio-Cortez used long-form, highly personal storytelling to help fuel her establishment-rattling rise from New York bartender to Congress’ youngest female member ever. But even more compelling was “Doors,” the captivating ad from Texas Democrat and Air Force veteran MJ Hegar. She fell short of victory, but the ad gave her campaign an immense boost in national awareness—and will be used as a role model for countless campaigns in the years to come. Award shows most often celebrate successful advertising, but in the case of DDB Dusseldorf’s “Highlight the Remarkable,” a win at the Cannes Lions was actually the starting point on a road to worldwide acclaim. After this year’s festival, the campaign—highlighting the women who might be otherwise overlooked in a historic photo—was shared passionately across social media. In truth, you’ve probably never wondered why Taco Bell doesn’t serve fries. But that question still made great fodder for Deutsch’s two-part campaign of hilarious movie trailers for a fictional film franchise called Web of Fries. Part 1 is a pitch-perfect sendup of conspiracy films where a shadowy occult hand guides the inner workings of the world around us. In Part 2, we vault into the dystopian near future to see how this conspiracy has sparked a fast-food war—one that ’90s film lovers will recognize as the setup to 1993’s Demolition Man starring Sylvester Stallone. We didn’t know we wanted this, but here we are. Now pass the nacho dip.

What happens when you create a holiday ad for an electronics retailer that feels absolutely nothing like a holiday ad for an electronics retailer? In the case of Scandinavian chain Elkjøp, you get an unexpectedly emotional and cinematic tale of a young girl who discovers that an older, reclusive relative has lived a life of adventure, love, loss and regret, all of which comes to light when she discovers the broken mementos of his past. The ad is lovely and powerful on a level that few ads could ever hope to accomplish.

Cosmetics brand Shiseido creates some of the most riveting and unexpected marketing on Earth, with each new ad taking you in a new and surreal direction. This year, Shiseido created a piece of commercial art with its Halloween-themed ad “The Party Bus,” which unfolds like a lyric-less opera as we watch a young woman choose between two romantic options. The setting and costumes are lovely, but it’s the animated makeup that brings a new and fun level of emotional depth to the ad. For years, “DTF” (“down to fuck”) has been a shorthand often used to slut-shame or demean women, so it’s not exactly the first expression you’d expect to find in a marketing campaign for a progressive-leaning dating app. But OKCupid and W+K New York reclaimed the term by celebrating a wide array of new meanings in their outdoor-focused campaign. Exceptionally illustrated with colorful visuals by artist Maurizio Cattelan and photographer Pierpaolo Ferrari, the campaign proposed looking for partners who Are Down to Farmers Market, Down to Fire Up the Kiln, Down to Finish My Novel or Down to Four Twenty. OKCupid CMO Melissa Hobley told Adweek the campaign boosted social mentions of the dating resource by 50%.