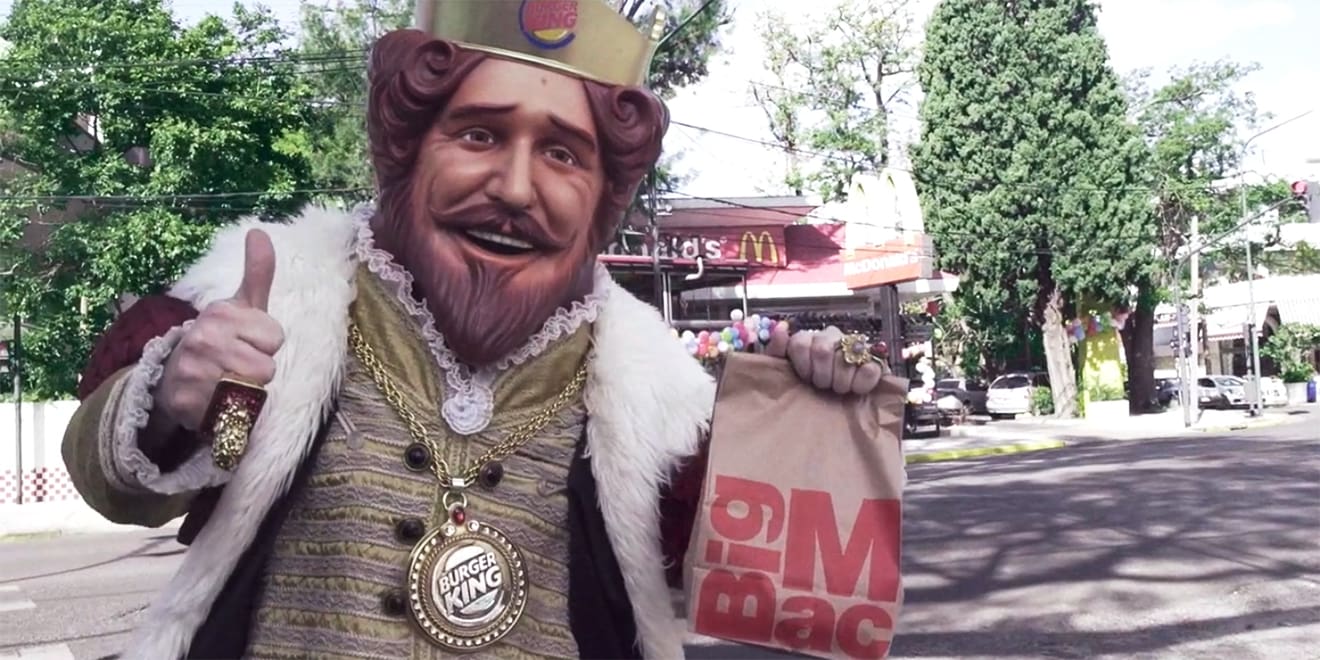 Burger King has become known for scorching its biggest rival, but stops short of being 'mean-spirited.'
Burger King
Share
By David Griner
|
May 14, 2019
Share

It may not have the body count of Game of Thrones, but Burger King’s increasingly epic marketing battle with McDonald’s has become one of the most-watched rivalries in the advertising world.

Since global CMO Fernando Machado joined Burger King in 2014, he has been escalating the chain’s fiery approach to its largest rival—and thanks to his relationship with a worldwide roster of innovative agencies, he’s been able to turn his brand’s lighthearted barbs into globally celebrated marketing and PR campaigns.

As Burger King sparked another round of global media attention with its newest campaign for clown-free birthdays, we decided to look back at the seven campaigns that have truly defined Burger King’s modern approach to trolling McDonald’s (along with one bonus case study that shows Burger King can also play nice once in a while).

Machado says Burger King’s campaigns targeting McDonald’s have been a two-pronged success: Boosting sales while also showing the brand’s personality. The key, he said, is poking the bear without hitting below the belt.

“Many of our ideas have been incredibly effective at building brand love and driving business results,” Machado tells Adweek. “It’s all about the tone of the brand. Our tone is fun, lighthearted and self-deprecating. We like having fun, and we can take a joke at the same time. That in my view is a condition for you to be able to poke fun at others. We don’t do things that are mean-spirited or that can come across as bullying. Fast food is a fun occasion. And as a challenger brand, we try to be the fun brand in a fun product category.”

Here’s a chronological look back at seven campaigns where Burger King brought the fire: 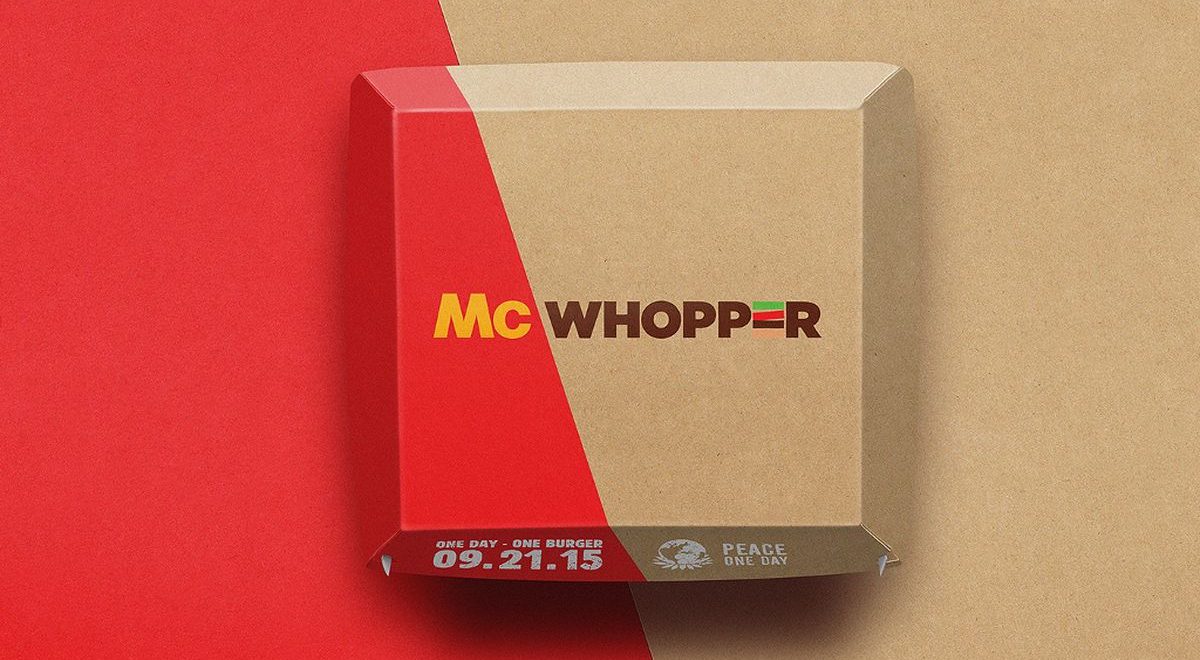 When does an offer of peace set off a yearslong war? In the case of Burger King and its quasi-obsession with needling McDonald’s, the answer is 2015. That’s when Burger King penned an open letter to its largest rival in a New York Times ad, asking to come together on International Peace Day and create a McWhopper, with all proceeds going to a nonprofit advocating for peace. McDonald’s politely declined, but the proposal sparked massive global attention and even led other, smaller burger chains to join the cause and partner with BK.

Nearly 9 billion media impressions later, Burger King and agency Y&R New Zealand took home the Grand Prix in Media at the 2016 Cannes Lions along with the Grand Prix in Print, and a spark was lit that would largely define some of Burger King’s best advertising in the years ahead. While sales results weren’t released publicly, the campaign did win the coveted Grand Effie for effectiveness, typically seen in the industry as a benchmark of business success beyond publicity. (By the way, if you want to see Adweek’s own attempt at creating a McWhopper, you can see the resulting abomination here.) 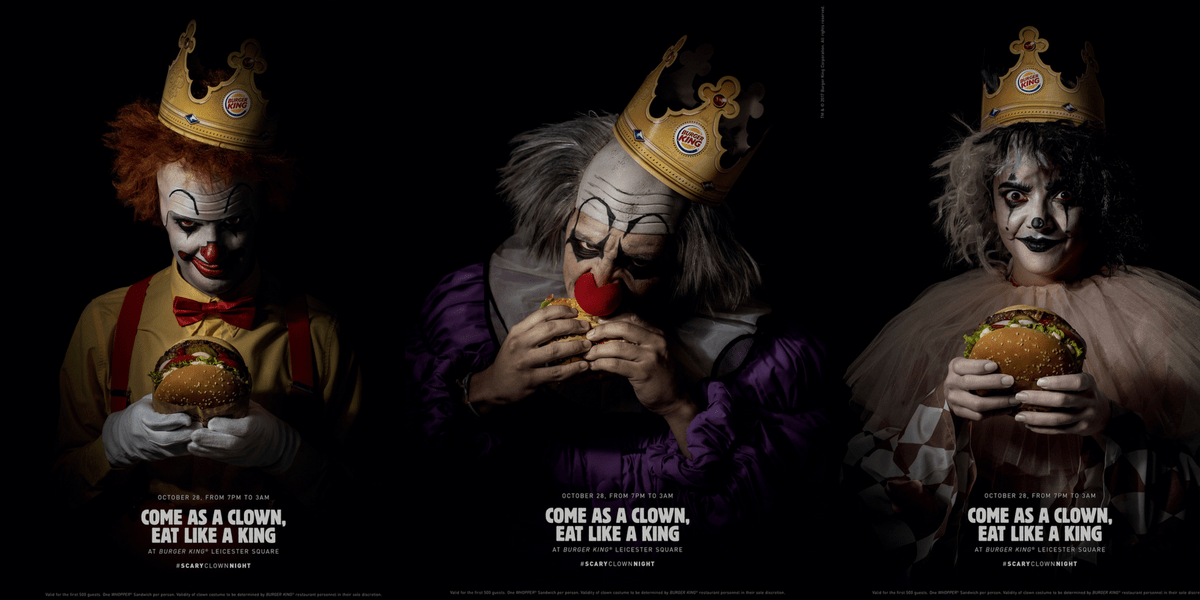 As the 2017 version of Stephen King’s It terrified its way to being the highest-grossing horror movie in history, with an astounding $700 million at the global box office, Burger King leveraged this revived worldwide fear of clowns into a simple and biting promotion: Scary Clown Night. On Halloween, Burger Kings around the world would give free Whoppers to anyone who came dressed as a clown.