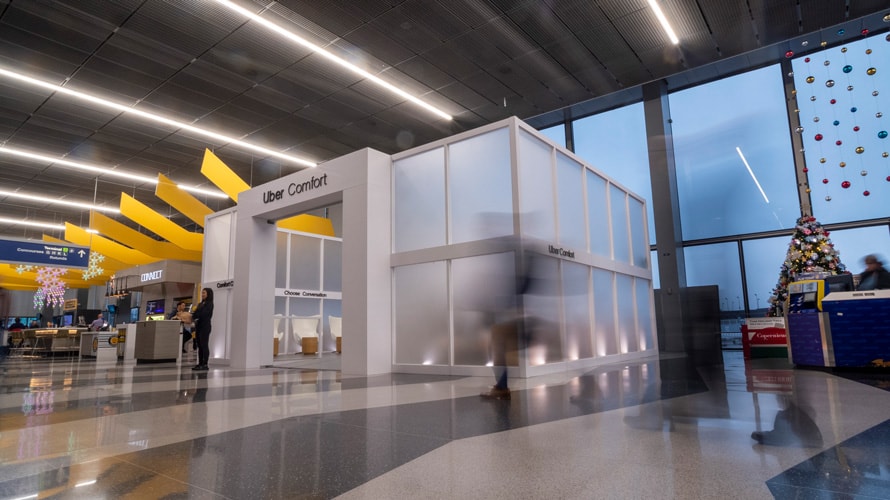 Uber's Comfort Lounge gives travelers the perks of a private lounge without a membership fee. Uber

If you’re one of the more than 4.3 million passengers expected to travel through Chicago’s O’Hare International Airport this Christmas, Uber has plans to make your trip a little more comfortable, at least until you board the plane.

Unveiled last week, the Uber Comfort Lounge gives travelers at O’Hare’s Terminal 2 the opportunity to enjoy the perks of a private lounge without the additional cost of a membership fee.

Created in partnership with Clear Channel Airports and the production company Tool of North America, the pop-up gives Uber a chance to promote its new Comfort Class while also expanding its footprint in America’s airports.

Travelers who enter the Comfort Club are greeted by Uber ambassadors and offered complimentary soda or water as well as a “comfort package” with socks, travel wipes, earplugs and a face mask. There are also noise-canceling headphones and a reclining leather chair for those who need to tune out various announcements.

While similar offerings can be found in most business classes, Uber’s lounge is available to every traveler in the terminal who will also receive a promo code for a discount on an Uber Comfort ride. This is the second installment of Uber’s work with Clear Channel, first announced in October when the ride-sharing app used Clear Channel’s digital ads to guide travelers at Seattle’s Sea-Tac Airport to its offsite pickup location.

“We’re looking at all the different options to help airport passengers use Uber in a more comfortable manner,” said Harsha Chandra Shekar, Uber’s business development lead. “Airports are very important to Uber’s business model…They’re often longer trips and they add up to a significant part of our revenue.”

Between 2014 and 2017, the percentage of U.S. business travelers using ride-sharing and ride-hailing services grew by over 50%, according to a report released last year by LEK Consulting. The report also found that airport-related trips accounted for about 25% of ride-sharing brands’ revenue.

But that revenue is in jeopardy as airports in the past year have started moving ride-sharing companies like Uber and Lyft away from arrivals terminals in favor of designated pick-up zones to combat congestion. When Los Angeles’s LAX  instituted the policy, chaos ensued, forcing travelers and drivers to wait for hours for their ride.

Neither Uber nor Clear Channel could provide specifics as far as the cost of the pop-up, but “it’s not immaterial. … There’s a lot that goes into it,” said Jon Sayer, senior vice president of sales at Clear Channel Airports. “A tremendous amount of travelers are coming through here.”

Uber wouldn’t say which airport is was heading to next, but given the partnership with Clear Channel Airports, which operates in over 260 airports worldwide, it has plenty of options.

“We’re focused on continuing to invest in our presence at airports,” Chandra Shekar said. “We don’t have any specifics to disclose, but we’re just getting started here.”

The lounge will remain at O’Hare until Jan. 3.