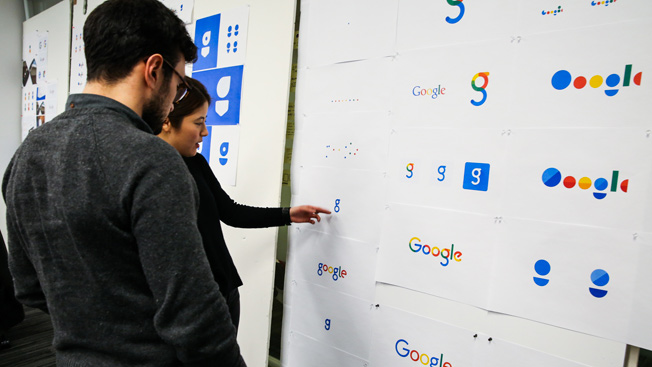 Yesterday, Google introduced the world to its new visual identity, a serif-free logo and colorful interactive icons. The new look and feel—the brand's attempt to make interacting with Google on its various platforms a seamless experience—has received mixed reviews.

In fact, Twitter users seem convinced that Google's new crooked—or smiling—"e" rips off Heineken's logo. Google admitted as much, citing Heineken as an inspiration, and the beer brand had a cheeky response.

But advertising and branding experts seem to agree that it's smart branding, especially since it follow's Google's retooling of its corporate identity earlier this month.

"It's another brilliant branding move by Google," said Allen Adamson, North American chairman at brand consulting firm Landor Associates. "It makes their logo less corporate, more childlike, and for a tech company, the easier it feels to use, the more people will use it. Plus, it's not a static identity; there's movement. It's a way to link the visual and the audio."

Mei Wing Chan, director of design at global strategic branding firm Siegel+Gale agreed. "As Google has grown, from a structural point of view, they have to adapt to that more corporate look," said Chan. "Thinking about Alphabet being more corporate parent company and Google being one of its entities and kind of visually connecting the two from a branding point of view, that's a really smart way to move forward."

And the change is certainly a welcome one for designers who've been hearing from Google about its Material Design program.

"They are finally taking their own design advice," said David McIninch, CRO at Acquisio. "They basically have spent the last year or so pushing their 'Material Design' system onto product and graphic designers and have finally updated their logo to reflect the essence of material design."

Geoff Cook, founding partner at international branding firm Base Design, agreed. "Google is putting their flag in the ground that they are a design-first company," he said. "Design in its essence is about function, and this new design language is stating to the end user that Google is dedicated to products. It will tie together the ecosystem in a new way that really connects the dots for core users."

Plus, from a design standpoint, using a sans-serif logo makes sense, according to industry experts.

"San-serif is a little more scalable than a serif is," said JD Hooge, partner and CCO of Instrument. "If you think of something without the tiny little details and that contrast in a letter form, it's just more scalable. It can work as something that's 24 pixels by 24 pixels and on the biggest billboard in Times Square, so there's a practical benefit to it."

That Google allowed people to have a peek at their design process is smart, say experts who saw it as a move to make the tech giant feel a bit more transparent.

"It's almost giving more context to what the final look is," said Chen. "It shows that so much work doesn't get shown. As a designer I think so much good work ends up going into the trash can. This is one where you're kind of revealing the thinking behind the design."