Struggling Through a Workout? A Singing Clay Matthews Will Carry You to the Finish 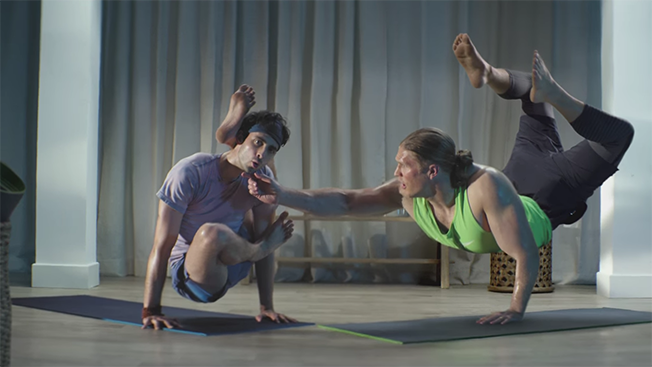 Having trouble getting through a tough workout this week? A singing Clay Matthews and Muscle Milk can help you reach the finish line.

In the next extension of the brand's "Stronger Everyday" campaign, created by agency of record Mekanism, Green Bay Packers linebacker Clay Matthews appears in a series of situations where he is tasked with helping athletes performing at any level, from professional to recreational, step up their game.

Oh, and he actually sings in the ads too.

"From the viewers perspective you're hearing the song being sung and then visually on screen you're seeing what feels very much like an epic sports montage with a fun twist," Josh Mohr, CytoSport vp of consumer marketing for Muscle Milk, said.

Matthews is meant to personify Muscle Milk in the 30-second spot and a series of 15-second ads that show the athlete helping a women kill it on the tennis court and carrying a runner on his shoulders during a race. The idea being, even when someone as athletic and strong as Clay Matthews isn't around, Muscle Milk will be there for you and get you through your training.

The decision to have Matthews actually sing "Lean on Me" came from his impressive past crooning in the film Pitch Perfect 2. "The minute Clay started singing in the recording studio everybody was pretty blow away … He was so self-deprecating about the whole thing," Tommy Means, Mekanism founder and executive creative director said. "The minute he started singing he sounded like a song bird."