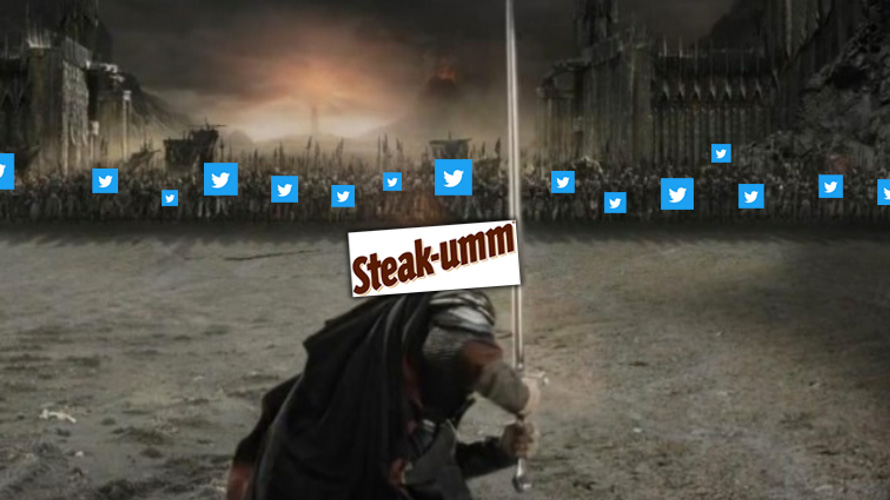 Processed Philly cheesesteak filler doesn’t normally exude an aura of clarity, reason or truthfulness, but this is 2020, and normalcy has temporarily ceased to exist. Instead, our timeline has been disrupted by a global pandemic, to which we’ve responded with a collective groan.

Steak-umm emerging as a woke beacon of light in an online sea of try-hard brands wouldn’t have made sense at any other point in time, but during this historical moment of chaos, outrage and unrelenting disappointment, it’s just about the only thing that checks out.

On Monday night, the frozen meat brand published a sobering, nine-part soliloquy on Twitter admonishing misinformation and advising on the importance of media literacy and reliable sources of data, especially during the coronavirus crisis. At the end of the thread, Steak-umm asked readers to consider donating to Feeding America’s COVID-19 fund, dropping the mic with its cryptic signature phrase, “Steak-umm bless.”

friendly reminder in times of uncertainty and misinformation: anecdotes are not data. (good) data is carefully measured and collected information based on a range of subject-dependent factors, including, but not limited to, controlled variables, meta-analysis, and randomization

According to Jesse Bender, account director at Steak-umm’s public relations firm Allebach Communications, as of April 8 the initial tweet from the frozen meat brand’s thread had amassed 5.1 million organic impressions and 443,000 engagements, including over 57,000 likes and 15,000 retweets. Bender confirmed to Adweek that the Pennsylvania-based food marketing firm did not spend money on promoting the tweet.

Prior to Monday night’s thread, Bender said that Steak-umm had received around 500,000 impressions per tweet.

Though this particular salient thread got the attention of prominent lawyers, scientists, authors, professors, vegetarian influencers and top broadcast journalists like Jake Tapper and Soledad O’Brien, its incisive, no-BS attitude toward modern society is not new for the thin-sliced meat product—nor is it without controversy.

While some critics have derided Steak-umm for its shenanigans, deeming the social strategy “uneasy” or “trite,” Bender and Nathan Allebach, social media manager for Allebach Communications and the man behind the brand’s voice, both attested that they’re not using the platform to sell, but to help.

“We’re pretty much just finding any topics that we can add nuance to and that we can get people thinking about so that we can decrease social polarization as best as we can,” Allebach said.

Nevertheless, Allebach admitted that he and his social media team have had to find ways to navigate the middle ground—or “purgatory,” as he called it—where the brand is trying to help people get access to food through hunger relief organization Feeding America while promoting its own product without overtly campaigning.

here are some thoughts on how we can come together amidst this pandemic and economic crisis, despite the challenges of misinformation, media inundation, partisanship, and cultural polarization. THREAD

“For the past couple of years, we’ve been pushing the envelope of what brands can and should be doing by fully humanizing Steak-umm. We’ve really entered into cultural conversations by adding useful information and useful content, instead of focusing so much on what is strategic or brand-centric,” Allebach continued.

How Steak-umm found its voice

Allebach told Adweek that it took the agency almost two years to break into the Twitter scene after winning the Steak-umm account in 2015.

When the Quaker Maid Meats brand finally entered the Twittersphere in late 2017, Allebach had already begun establishing Steak-umm as an “amusingly strange account,” described to Adweek as as a cross between Nihilist Arby’s, SpongeBob SquarePants, Joe Rogan and Rick and Morty’s Rick Sanchez.

The brand began to gain internet fame with its breakout #VerifySteakUmm campaign during the height of Twitter’s neo-Nazi verification scandals, which ultimately led the social media platform to rethink who receives its coveted blue checkmark, making it a borderline elusive status symbol for brands and creators alike.

After angling for verification for nearly five months with the in-your-face strategy of calling Twitter out through poorly Photoshopped memes, conspiracy theories, meat-centric nihilist rants and inspirational quotes that walk a fine line between positive and derisive, Steak-umm finally got what it wanted.

A couple months later, Steak-umm made headlines again for its poignant Twitter thread on generational angst and anxiety, with acutely aware points about “mass media addiction” fueled by exploitative brands, all while throwing in a tasteful meat pun or two.

Per Allebach, Steak-umm’s absurdist flavor on social media reinvigorated the brand and brought it back to relevancy after the frozen meat product’s popularity dropped after the early ’90s.

why are so many young people flocking to brands on social media for love, guidance, and attention? I'll tell you why. they're isolated from real communities, working service jobs they hate while barely making ends meat, and are living w/ unchecked personal/mental health problems