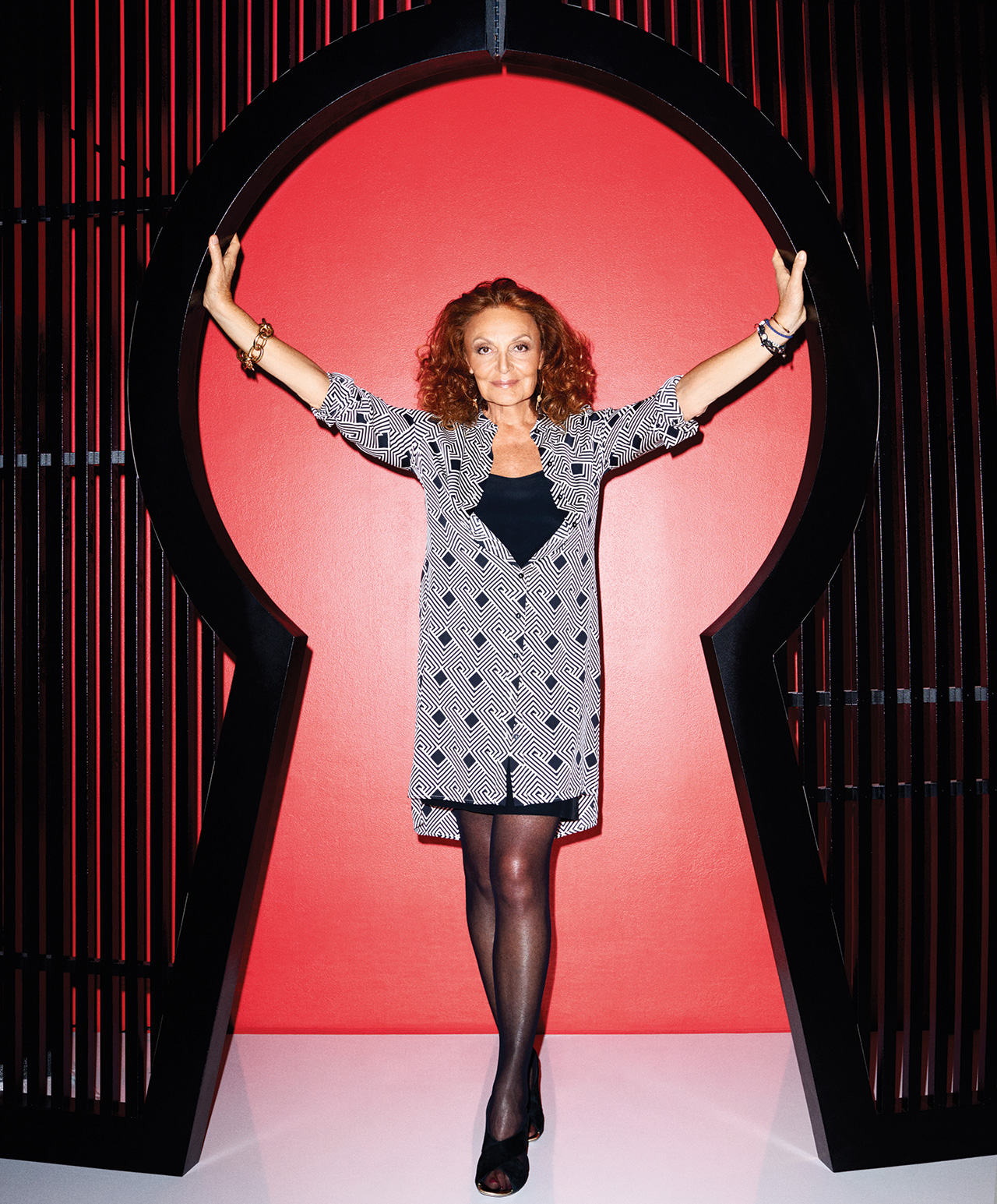 In the world of fashion, there are few figures as legendary as Diane von Furstenberg. While the 68-year-old, Belgian-born designer debuted her namesake brand in 1970, it was four years later that she truly revolutionized the modern woman's wardrobe with the introduction of her now-famous jersey wrap dress. By 1976, she had sold more than a million dresses, introduced fragrances and cosmetics, and landed the cover of Newsweek—all before reaching her third decade.

She eventually sold both her dress design license and beauty line and moved to Paris where she started a publishing company. But von Furstenberg couldn't stay away from designing for long. In 1992, she boldly reentered the fashion business with Silk Assets, a lower-priced separates collection sold exclusively on QVC, the then-6-year-old shopping network in which her husband Barry Diller was an investor. Von Furstenberg's first QVC collection sold out within two hours, and over the course of four years, Silk Assets netted more than $40 million in sales.

The massive success of her partnership with QVC gave von Furstenberg the confidence to relaunch the DVF brand in 1997. This time, her target customers were the daughters of her original patrons—and they proved to be just as crazy about her easy-to-wear designs as the previous generation. Since its rebirth, DVF has expanded into shoes, handbags, jewelry, luggage and home goods, as well as tech accessories. (As a matter of fact, Google Glass made its New York Fashion Week debut on the DVF runway in 2012.)

In addition to growing her retail brand, von Furstenberg has remained a vocal proponent for women's rights (in 2010, she created the DVF Awards, presented annually to female leaders) and the American fashion industry (she has been president of the Council of Fashion Designers of America since 2006), among other causes. Last year—in addition to publishing a memoir, The Woman I Wanted to Be—von Furstenberg embarked on yet another adventure: reality television. Currently in its second season, House of DVF, airing Sundays at 10 p.m. on the E! network, follows the designer and her team as they search for their next "brand ambassador," doling out life lessons along the way.

Meanwhile, von Furstenberg's company is now entering its own uncharted territory with the arrival of its first CEO, former Tory Burch and Valentino executive Paolo Riva.

Adweek spoke to von Furstenberg about her plans for the future, the challenges of reaching millennial consumers and what it takes to maintain a global fashion empire.

Adweek: Since relaunching your brand in 1997, your distribution has expanded to more than 1,500 points of sale in 55 countries. How do you maintain a successful global brand while staying true to the all-American DVF image?

Diane von Furstenberg: The truth is that I was a brand before we knew what a brand was. I started my company with a dress, and I did not know what I wanted to do, but I knew the woman I wanted to be. I became that woman through that dress, and all of a sudden, I became a brand. Looking back, I was always obsessed with coherence. If everything that you have done reflects the same thing, then you know you're successful in your life. Celebrating freedom, empowering women and inspiring confidence is what I am about as a person and as a brand. So that's one [part of the brand]. The other part is mentoring. I speak to young women's groups and I tell women that you have to be the woman you want to be. That's what I promote. So I guess that how you maintain a global brand is with as much honesty and authenticity, coherence and sincerity as possible.

How do you keep that message consistent when you're speaking to people in so many different countries and cultures?

Tell me about how you see the brand's global footprint evolving.

Right now, I am at the beginning of my third phase. The first phase was "American Dreams" and then it was "the Comeback Kid" and now it's "Legacy." So how do you institute that? I'm setting up a new team. I wrote a book. I did the [much-hailed "Journey of a Dress"] exhibition [which was staged in Asia, the Middle East, South America and the U.S. last year to mark the 40th anniversary of the iconic wrap dress] because I wanted to look back at the past. And so now it's really in the hands of a whole team of people knowing the past, knowing what we stand for and how do we relay that message to the millennials. That is how we're building the future.

How do you keep a legacy brand relevant?

You stay relevant by putting the young woman in the center of everything. It's always the young women who bring their mothers back. After I relaunched my company, I started with a whole new generation. It comes very naturally for me to understand that. And you know, what I stood for back then is still very much relevant to what girls want today.

This year, you brought on Paolo Riva as CEO. Why was he the right person for the job?

I was looking for either a CEO or a creative director with a business mind. I interviewed a lot of people who were already CEOs, and finally my husband said, "You're looking at it wrong. You should look for the new superstar, the one who is not a CEO yet." And then I met Paolo and that was it. He was trained as a banker. He's a very strong businessman. He was part of a big consulting group. But then he realized that he loves product and he loves fashion, so he became a merchant. And now he is truly a merchant. So for me, it's the ideal situation.

You've spoken about how you see Paolo as your successor. And yet, you're such an integral part of the brand. How do you see your own role changing?

I am the face of the brand and to some degree I'll still be the face of the brand even when I'm not there, but I'm always looking ahead and I want to be able to put this company in the hands of a leader and a new team and detach myself a little bit. I will still be influential. I know that I still want to agitate the magic wand and show everyone that I'm relevant and make sure that they have the right connections. But I've reached a point in my life where I want to use a bigger voice, and I have a very big platform now. When you're successful, two things happen: One is that you have financial independence, which is great, and two, you have a voice. And if you have a voice, it's your obligation and your privilege to use your voice for people who have no voice.

There have been rumors that one reason you hired Paolo was because you plan to take the company public. Any status update on that?

Not right now. We are very, very happy that the family owns the company 100 percent and it gives me an enormous amount of flexibility. We are going to make major changes and some things will be very much out of the box, and I feel so privileged that I will be able to do that precisely because I can take those risks. What will happen later, we'll see.

One of your other projects is your E! show, House of DVF. Why did you decide to do a reality show? It's not like you need brand exposure.