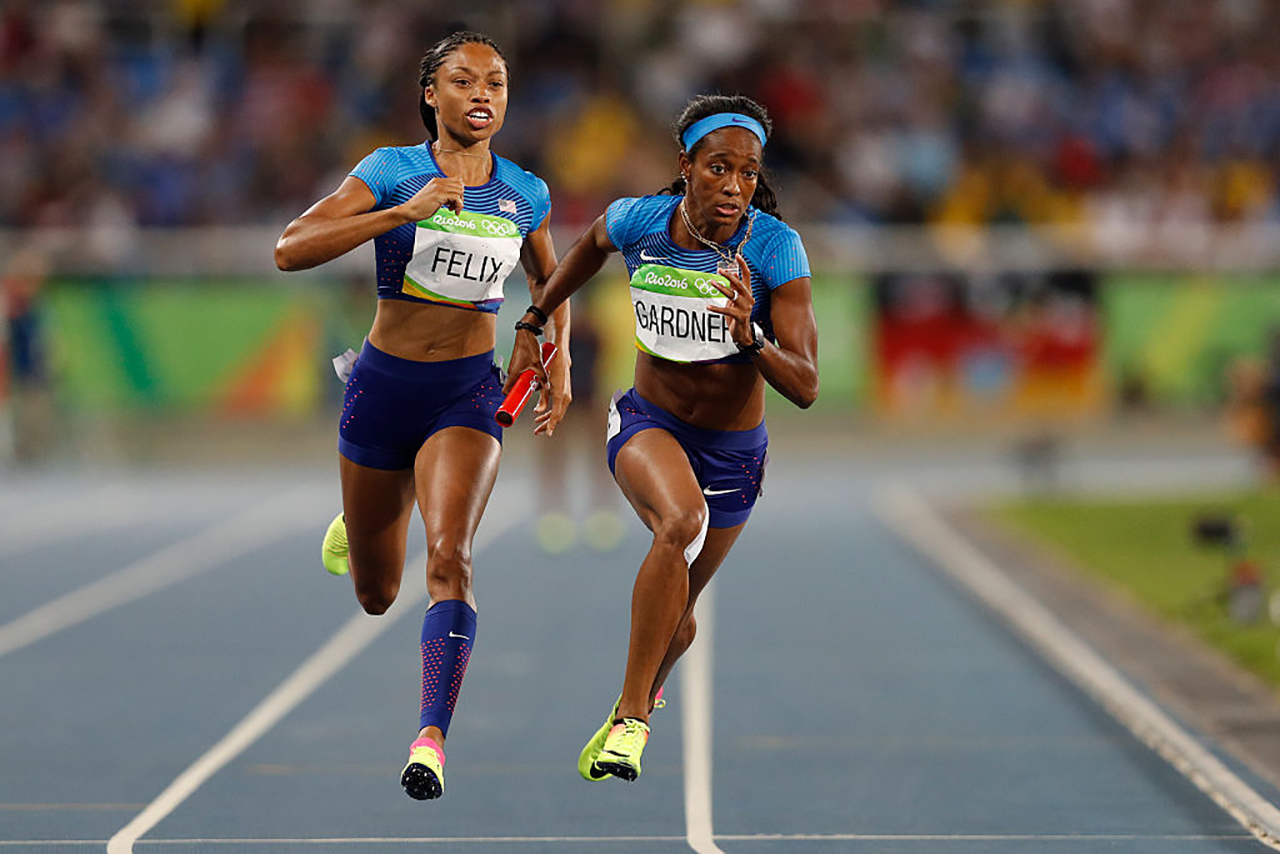 Team USA reached 105 medals at the Summer Olympics in Rio on Friday, keeping the nation atop the medal count. Here's what marketers need to know about the last 24 hours of the Olympics:

The U.S. added two medals to its total count Friday night, putting Team USA in the lead by 40 medals. Team USA won the gold in the women's 4×100 relay and the silver in the women's pole vault. (SB Nation)

Here's the total medal leaderboard as it stood going into Saturday, according to NBC Olympics:

Team USA's Allyson Felix became the most decorated woman in Olympic track and field history on Friday as she won her fifth gold. The medal came alongside her fellow 4×100 relay winners: Tianna Bartoletta, English Gardner and Tori Bowie. This marks the second consecutive Olympic gold for the U.S. in the 4×100. (CNN)

The U.S. track and field team was disqualified in the men's 4x100m relay final, denying them the bronze, and the team has filed an appeal. The team was disqualified after Americans Mike Rodgers and Justin Gatlin passed the baton outside the exchange zone according to judges, but the Americans say there was no infraction. (FOX Sports)

Usain Bolt, the fastest man in the world, took the gold in the final Olympic race of his career on Friday. Bolt, of Jamaica, is tied for the most career Olympic track and field gold medals with Finland's Paavo Nurmi and Carl Lewis of the U.S. (NBC)

Q&A: Nike's CMO on the Brand's Olympics Campaign Highlighting All Kinds of Athletes

Nike's chief marketing officer, Greg Hoffman, spoke to Adweek about the brand's latest campaign, created by Wieden + Kennedy in Portland. The campaign could be one of the brand's most inclusive yet, including Sister Madonna Buder (the "Iron Nun") and U.S. transgender athlete Chris Mosier. (Adweek)

In Pole Vault, a Near Miss for U.S. Means a Gold for Greece

U.S. women's pole vaulter (and first-time Olympian) Sandi Morris lost her chance at gold when she barely grazed the bar, costing her a vault that could have put her on top. (She technically tied with gold medalist Ekaterini Stefanidi of Greece for best height, so the final decision came down to who had the fewest misses overall.) But silver was still a huge win for Team USA, especially after reigning gold medalist Jenn Suhr was battered by a weeklong virus, effectively taking her out of the running. (Team USA)

Ryan Lochte alleged that he and fellow swimmers were robbed at gunpoint while in Rio. The story as it was told turned out to be untrue, but U.S. swimmer Gunnar Bentz apologized Friday for his role in the scandal. He also said missing surveillance footage from the incident would prove that the swimmers were held at gunpoint after their tussle with a security guard and told to leave money. (USA Today)

Thursday was an inspiring night in Rio—Team USA's Ashton Eaton won the gold in the men's decathlon and Usain Bolt earned a third gold medal in a row in the 200 meters. 21.7 million viewers tuned in Thursday, slightly up from Wednesday night, but still one of the lowest-rated nights of the Olympics so far. (Adweek)

Triumph, Cuteness and Controversy Make the Olympics a Messy Mix on Social Media

Media technology player 4C reviewed the highlights and lowlights of Thursday's Olympic games. The buzziest moments on Facebook and Twitter came from a handful of moments, including Usain Bolt winning the 200-meter gold 572,746 engagements (likes, comments and retweets) and Alistair and Jonny Brownlee taking the gold and silver in the triathlon. (Adweek)

The Huffington Posts virtual reality studio, RYOT, has partnered with Samsung to tell stories at the Olympics using Samsung's new Gear 360 camera. Those stories are about Brazilian culture and life in the city. (Adweek)