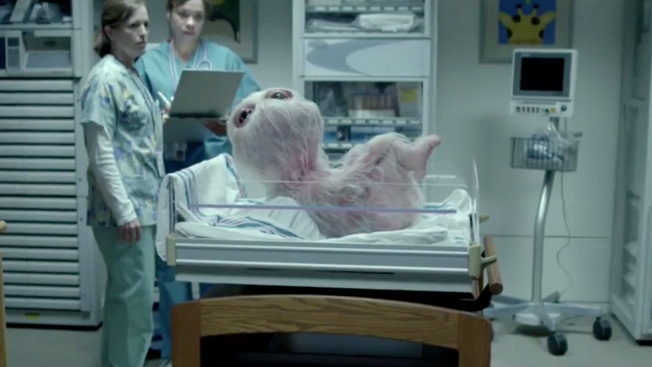 In its advertising, GE usually sticks to one of two themes. There are the "cool technology stunt" ads ("Drop Science," "#SpringBreakIt") and the "human face of technology" ads ("Childlike Imagination," "Kumiko's First Ultrasound"). In both cases, you're left feeling pretty good about the world and/or impressed with the stuff GE is coming up with.

This is not quite the case with BBDO New York's latest GE spot, "Ideas Are Scary." While it ostensibly has a happy ending, there's a good chance that it will leave you mildly unsettled, if not deeply disturbed, by humanity's callousness.

The ad, directed by Noam Murro, begins in a hospital, where a bizarre creature (apparently the embodiment of a "scary idea") has just been born. It's pretty creepy looking, and the doctors look suitably concerned.

By the next scene, the "idea" has grown up into a bigger, more unattractive and even more pitiful creature, dejectedly wandering the streets of a big city. He gets angry looks and objects thrown at him, is kicked out of businesses and sleeps in a box in a dirty alley—because "ideas are the natural born enemy of the way things are," per the narrator.

Finally, just when you feel like you're about to drown in sadness, the creature happens to walk past a GE office, where he's taken in by a kindhearted employee and embraced by the rest of GE's scary-idea-loving staff. And then he really gets a chance to shine.

"Under the proper care, [ideas] become something beautiful," the narrator concludes.

So … I guess we're supposed to feel uplifted now? And not be bothered by the really depressing first part of the ad? You know, the part that portrayed the world as an evil place full of terrible people who hate things that are different and were totally horrible to this poor, sad creature?

Because in the end it turns out that GE employees, unlike the rest of humankind, are nice? Yeah, good luck with that.