Ad of the Day: This Amazing New Gadget, the Quitbit, Tells You When Your Time Is Up 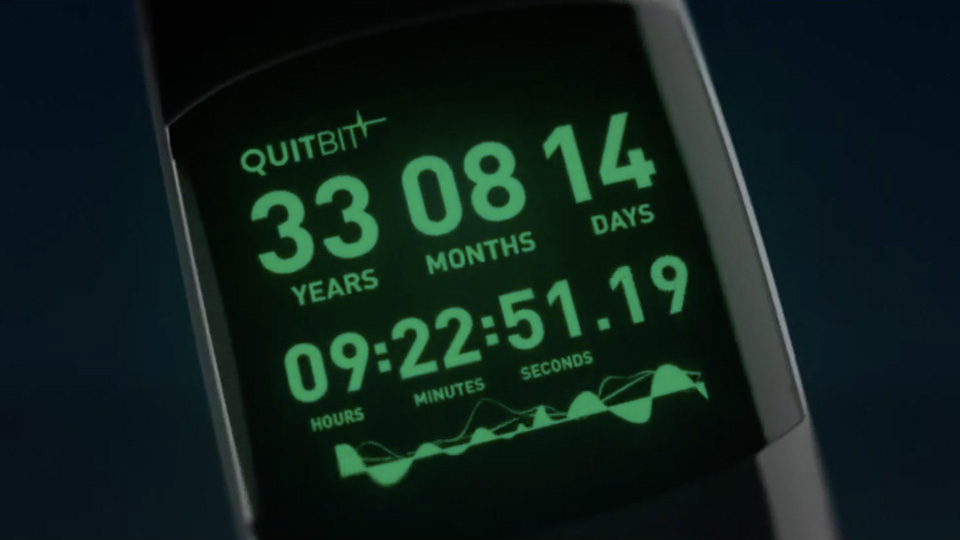 It doesn't time your run. It's for when your time runs out."

That's one of the slogans being used for a shocking new device called the Quitbit, a macabre piece of wearable tech that pinpoints the exact moment in the future when you'll shuffle off this mortal coil and ascend/descend to a place where you won't need high-tech gadgetry to keep tabs on your physical self—because you'll no longer have one.

It's like a Fitbit, but different. Very, very different. When your time is almost up, the Quitbit sends a notification alerting you that it's time to start preparing for your final goodbye.

Check out the launch video here:

The advertiser is Mount Pleasant Group, which owns 10 cemeteries in the Toronto area, as well as four crematoriums, 14 mausoleums and five visitation centers. The larger campaign, "The Art of Saying Goodbye," has been running for a few years—including short films with real people discussing the importance of pre-planning for death. But this new work is pretty fun and provocative—a departure from the company's more evocative work.

Adweek spoke with Glen D'Souza, associate creative director at Toronto agency Union, which created the campaign, about the detour into parody and humor.

Does the brand have a history of creative work?

A few years ago, partnering with Academy Award-nominated filmmaker Hubert Davis, Mount Pleasant Group introduced "The Art of Saying Goodbye," a series of short films telling real life stories of people candidly discussing death, and the idea of legacy. This approach stemmed from the insight that people generally avoid funeral planning because it's a difficult subject to think about and discuss with family. The series humanized a very scary topic and made it more approachable. The execution of the series was incredibly beautiful and received accolades from industry experts throughout North America. Quitbit was a natural extension for Mount Pleasant Group, given the brand's history pushing the envelope in an otherwise very traditional category.

Was the Quitbit one of many ideas considered for a new campaign?

A more tactical digital and print campaign is currently in-market and focuses on lead generation with the same message—the importance of pre-planning. However, the client had a small budget set aside for some form of content that reframed the pre-planning message in a new way in the digital space. A handful of concepts were presented. Quitbit rose to the top.

Where did the Quitbit idea come from? Did you ever worry that it might seem too dark?

Since we're living in a tech-hungry world, the inspiration came from the idea of combining technology with one of the oldest services around. Getting consumers to think about funeral planning and even death in general is a huge challenge, so a topic this sensitive had to be approached in a respectful and subtle manner.

Can you tell me about the script as well as the look of the film?

We wanted the film to feel scientific and authentic. We wanted people to feel like they could be watching something that has the possibility of being real, so the message of how simple it is to pre-plan with MPG comes through in a thoughtful way. The idea of having a spokesperson in a lab coat was always part of the concept. It felt like a great way to pull the audience in with something familiar before getting into something they're not quite expecting.

Where did you find the actress?

We found the actress in Toronto, working with Powerhouse Casting. She was incredibly authentic and delivered the messaging in a respectful manner.

Who is the target market? It seems suited to younger people, but are they the ones who should be thinking about funeral pre-planning?

While it's true a younger demographic may find this piece more engaging, Mount Pleasant Group typically aims to target ages 55 and up. At first glance, this may seem like an odd choice of medium for an age range that is typically seen as more traditional and less tech-savvy, but we found that generalization to be quite inaccurate. This older target has a contemporary way of living and is more active and in-tune with technology than we ever imagined.

They are also at an important stage in their lives; while some are starting to think about pre-planning and the role it can play in their lives, there's a gap between intention and action. Our hope is that Quitbit provides the impetus to close the gap by demonstrating the benefit and importance of having a plan before it's needed. And if we can introduce our message to a younger audience at the same time, even better—we just want to keep breaking down the social barriers that prevent more active funeral and legacy planning.