How Serious Is Amazon’s Challenge to Google and Facebook? 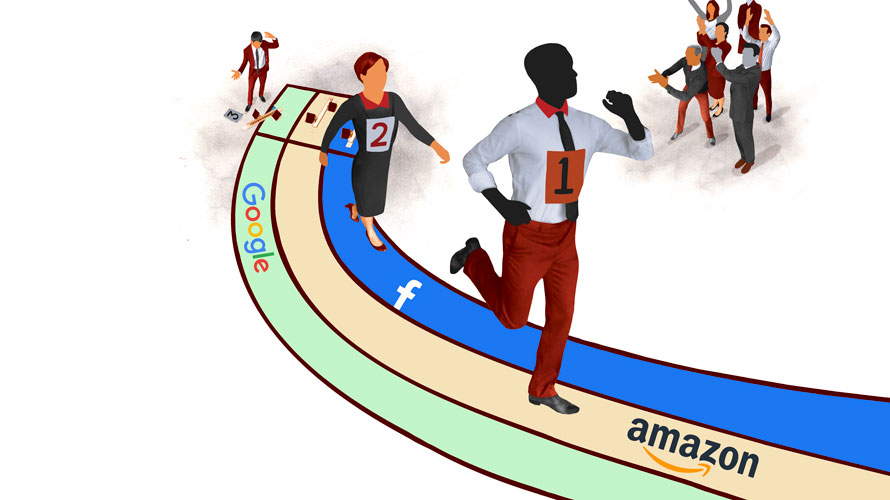 Amazon ended weeks of speculation by confirming its intended purchase of the Sizmek ad server and Dynamic Creative Optimization (DCO) suite. Some believe that this move could disrupt the very top of the digital advertising market.

The agreed sale price of Sizmek’s ad server and DCO assets were not disclosed publicly, but separate sources with knowledge of the proceedings stated that Sizmek’s assets were in the region of $75 to $100 million and estimated that the final offer was below that figure.

This deal almost brings to a close Sizmek’s Chapter 11 process, which also involved the sell-off of its data management and demand-side platform assets to Zeta Global for an estimated $36 million.

The Amazon transaction has yet to conclude—plus the assets of Sizmek’s remaining contextual advertising business Peer 39 has yet to attract an offer—but given the growth of Amazon’s ad business in recent years, it has sparked much speculation about the company’s prospects in an industry ruled by Facebook and Google.

Facebook and Google currently dominate the U.S. digital advertising market with a joint market share of 57.7% as of last year, according to eMarketer, making the two an effective “duopoly.”

However, the growing market share of Amazon Advertising, which accounted for 4.1% of all spend in 2018 and is set to hit 7.1% by 2020, is disrupting the status quo.

In the opening quarter of the year, Amazon Advertising generated $2.7 billion in revenue for the period, and Amazon’s svp and CFO Brian T. Olsavsky explained that the company wants to offer advertisers better insights on how media spend invested with its platform can drive e-commerce sales.

In particular, Amazon wants to make it easier for brands to understand how to use its DSP, including how spend can help generate ROI, according to Olsavsky’s comments in a Seeking Alpha transcript. Doubtless, it was this strategy that has driven its interest in what is the second most commonly adopted buy-side ad server on the market.

How much of a task lies ahead?

Amazon has yet to discuss its integration strategy. But given that its U.S. market share is still in single figures, it’s worth looking at what it will take to advance this number.

Some theorize that one of the drivers behind Amazon’s burgeoning advertising business has been the reallocation of spend from search budgets. A dollar away from Google means a dollar elsewhere. Why not Amazon?

Jay Friedman, president, Goodway Group, agreed with this assessment. “Search has always been the ‘lowest of low-funnel’ tactics,” he said. “And what’s better than being able to buy search on the same platform as the product is sold on?”

On whether Sizmek’s assets will significantly accelerate Amazon closing the gap on the duopoly’s market share, Friedman was cautious, holding that ad serving is a high-marketing but low-dollar-volume business.

“I don’t believe it will make Amazon’s ad business appear to grow significantly,” he said. “But that’s not what this is about. This is about building a fully integrated stack where advertisers don’t need to touch anything other than an Amazon product. Search, on-platform display, off-platform display, audio and video all in one place. Sound familiar?”

Paul Silver, COO of MiQ, explained that a buy-side ad server gets Amazon into the measurement space in an exciting way: It means the company could better provide closed-loop measurement to advertisers that spend money on its DSP. This is especially the case since up to 50% of e-commerce transactions happen on its own platform.

Another platform with longtail priorities?

Ana Milicevic, principal and co-founder of Sparrow Advisers, told Adweek that another source of growth for Amazon Advertising has been traditional in-store shopping budgets. She noted that (similar to the duopoly) it may be making a play for the ad budgets of SME players, not necessarily the media plans of Madison Avenue advertisers.