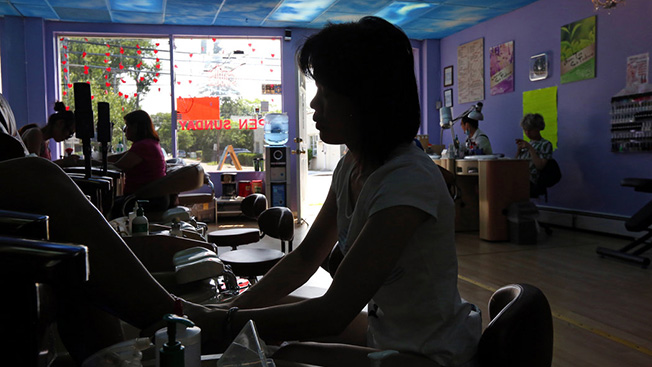 Regardless of whether you've ever found yourself in a manicurist's chair, there's a good chance that you've heard about The New York Times' recent investigation into the abysmal working conditions endured by many nail salon employees.

The two-part story, written by Times staff reporter Sarah Maslin Nir, was released online last Thursday before being published in the newspaper's Sunday print edition. Since then, the story has been reported on by news outlets around the world and even resulted in a policy change: On Monday, New York Governor Andrew Cuomo ordered "emergency measures" to protect nail salon workers against the illegal wage theft and health hazards detailed in the investigation.

We spoke to Michael Luo, the Times' deputy metro editor who oversaw Nir's investigation, about the story's impact, the decision behind its early online release and how it's re-energized the newsroom.

Adweek: Did you have any idea ahead of time that the story would have such a big impact?

Michael Luo: The way I always described this story to my higher-ups and others, in terms of trying to explain why we're investing all this time in it, is that it had the chance to become the rare viral investigative story. So I did know that it had the potential to be big, but what has happened in the last couple of days is beyond anything that I ever imagined. The Times does a lot of big investigative pieces, though. What makes this one different?

The thing that the Metro investigative portfolio has been best known for recently is the series on brutality at Rikers Island, which obviously generated outrage in its own right, but it involves people in jail—it doesn't necessarily involve most people's daily experiences. Getting your nails done has become a required part of many women's grooming rituals, so on that level, we knew that it was going to hit a lot of people personally and very close to home. Sarah herself is somebody who used to get her nails done a lot, and so she knew that this was going to turn a lot of people's worlds upside down.

In a blog post, public editor Margaret Sullivan addressed the fact that some readers didn't think that the story of was "important" enough to merit all the attention. Why do you think this investigation was so important?

These are immigrant workers, many of whom don't speak English, whose stories aren't usually told, so there's obviously a human factor that's important. I think the other reason that this story taps into something really deep is we're in this period where social-economic disparity and inequality is such a big issue. Some people also said that the investigation wasn't worth it because, if you were smart, you would already know that this was happening. But obviously nobody had documented how pervasive this was or really took people into this hidden world. And so I thought it was worth it.

What was behind the decision to publish the piece online last Thursday before publishing it in the Sunday paper three days later?

The idea is that the digital audience is much larger during the week than it is on the weekends. What we have found is that print readers don't necessarily mind that a story was out early, or they don't even know. It's risky [to publish a story early online]; there are all kinds of things that can happen, and I worried about that.  But our audience development side pushed it, and obviously it became a hugely successful experiment. From a reporter and editor's standpoint, it's kind of nice, because you have the chance to get two bites out of the apple. You hit people Thursday and Friday online, and then you get another wave of readership from the print paper.

Do you think it would have had the same kind of impact had you waited until Sunday to publish online?

I don't know. It's very difficult to A/B test it. It's not like we can segment it out and see how it would have performed if we had done it the other way. I think that if we had run it on Sunday, it still would have caused a big stir, but maybe we wouldn't have had a chance to keep it out as long as we did.

The decision to translate the story online into three different languages (Spanish, Korean and Chinese) was also interesting.

This is definitely the first time we've done three languages, and it's the first time we've done anything this long and this ambitious. Elisabeth Goodridge, who is our digital deputy editor, spearheaded this translation project. The decision to translate this was made pretty early on because we wanted the [nail salon] workers to be able to read about what was happening in the industry in their own language, and we also thought the story had potential to have traction overseas, particularly in Korea.

Has there been a lot of readership overseas?

I know that we have gotten a lot of comments from Korean and Chinese and Spanish readers. Anecdotally, it definitely seems like it has had pickup [overseas]. Our Korean translators sent us a list of media mentions in Korea. Some of them were about the situation in the story, but a lot them were actually about the fact that we translated the story into Korean.

What has the internal reaction been like at the Times? Do you feel like the story's success has re-energized the newsroom?

We're riding high, everyone from Arthur Sulzberger to Dean Baquet to our reporters. As someone who handles big investigative projects, it's definitely a boost. The traffic on this was off the charts—the web headline for the first day's story, The Price of Nice Nails, was trending worldwide on Twitter, which apparently has not happened before with a New York Times headline. It's validation of this kind of journalism, and it's definitely helpful for getting the resources to do this kind of thing.

What are your plans for following up on the investigation?

We're going to stay on it, obviously. One of the things that we need to stay on now is the Governor's response and making sure that the things that he's proposing are being done and making a difference. There are other aspects of the story that we didn't get into and we'll be discussing those in the coming days.