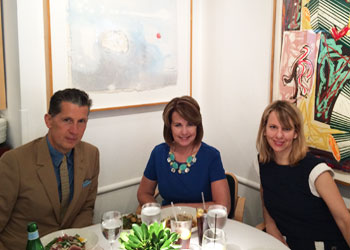 Clearly, this is not your mother’s W (although plenty of them are still faithful). Lucy told me the magazine is a must-read among the all important audience: affluent millennials. “The magazine is number one for growth in the millennial segment over the past five years,” she said. Under Stefano’s direction, the magazine also has a huge social media following. Taraji’s cover story has garnered nearly 1 million Instagram likes (and more than 20,000 comments, favorites and retweets) since images began appearing online last week. While Stefano is clear that print is and will remain the heart and soul of W (“We make a product that makes money—a lot of it—and it is something real you can touch”), he is keenly aware of the importance of digital in attracting readers and evolving the brand. “Digital is about having a conversation,” he said, evoking one of his favorite words when discussing W’s relationship with readers. “We are at a very important moment. Websites are important for certain readers but for millennials, they have become less important and social media is the way they get their information and video is a very important part of storytelling.”

W’s Art Issue has also become increasingly important to readers and advertisers alike. “Today art is social currency,” said Stefano. “We go where our readers are and they are at Art Basel, in London, Venice, Aspen, at the Prada Museum and other important art shows all over the world.” W Art, launched as a brand extension in 2014, is now the largest art publication in the world, with a circulation of 125,000. But Stefano is not averse to going more mass than class if the situation warrants it. You might recall that W’s 2010 Art issue got plenty of publicity when a spray painted and silvery Kim Kardashian appeared naked (of course) on the cover. “We were the first ‘upscale’ magazine to put her on the cover. She was (and is) the most controversial women on the planet, so there was backlash but she was also the most successful woman on television at that moment. She defined reality television. This was pre-selfie [era] and it was not about her, it was about what was going on in society as a whole.” As for Ms. K’s protestations that she didn’t know she was going to appear naked in the magazine, Stefano told me: “I was on the shoot and she was naked from the moment we started. She came around eventually.”

2015 has been a banner year for W, as it marks the third consecutive year of print advertising growth for the magazine (which saw double-digit increases in the fashion and retail categories, and doubled its auto business). W has achieved more than 50 percent growth in digital revenue and 25 percent growth in print revenue over the past three years. Lucy said “escape ordinary” is W’s overarching message, which highlights the magazine’s mission to “do things differently.” Stefano pointed to the eight pages of advertising from Gucci in the August issue as a testament to the strength of the magazine’s position in a very crowded fashion field. “When Gucci launched a new, more artistic look that was not the glossy look of the past, they chose W. Eight pages is significant.” Indeed.

Once lunch had been cleared and while we nibbled on a plate of cookies (See, fashion people do eat!) we indulged in some fashion gossip (sorry but it’s OTR) and I asked Stefano why he thought W is having such a moment when other print titles are struggling. “Today you have to be global to succeed. W has one voice,” he said. Within that one brand, he added, “You have to take risks. I talk with many CEOs of companies and they tell me now is the time to take risks. You have to reach outside of your comfort zone. Today, the power lies with the creators of content, not the collectors.”