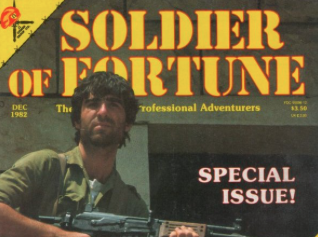 Whether you’re a title aimed at women aged 50+ or a title aimed at Vietnam vets, the magazine business is quite rough. One day after Meredith folded More, The Wall Street Journal reports that Soldier of Fortune is shuttering.

SOF debuted in 1975. Typical headlines included “Out-Dueling a Master Iraqi Sniper,” “Into The Jaws of Death” and “One Mile Kill Shot!” So yes, slightly different content than More, but the same ending.

“We couldn’t cut a deal to sell just the print edition,” said Colonel Robert Brown, SOF’s founder and publisher. “We want to keep the brand going so we are transitioning entirely to the Internet.”

“After we went to press with the last issue, it was like a humongous rock lifted off my back that I had been unaware of until it was removed,” added Brown.