The McLaughlin Group host passed away at 89. 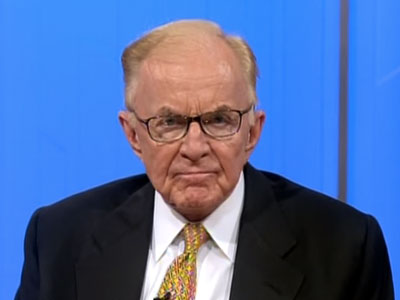 Over the weekend, John McLaughlin, host of The McLaughlin Group, missed the show for the first time in 34 years, explaining in a written message as the show aired that he was “under the weather.” The message continued, “The final issue of this episode has my voice, but please forgive me for its weaker than usual quality. Yet my spirit is strong and my dedication to the show remains absolute!”

Less than a week later, the 89 year-old host would pass away from prostate cancer, with The McLaughlin Group’s Facebook page posting Tuesday:

Earlier this morning, a beloved friend and mentor, Dr. John McLaughlin, passed away peacefully at the age of 89. As a former jesuit priest, teacher, pundit and news host, John touched many lives. For 34 years, The McLaughlin Group informed millions of Americans. Now he has said bye bye for the last time, to rejoin his beloved dog, Oliver, in heaven. He will always be remembered.

McLaughlin’s show, which first aired in 1982, pioneered a style of combative, partisan punditry so distinctive for its time that news of McLaughlin’s death brought out a large swath of people on social media mourning McLaughlin and sharing their memories of watching the show, whether as children or adults.

Sad news. We lost John McLaughlin this morning. I hear that he smiled before he passed. His final gift to us. RIP https://t.co/baM3bJ1gC2

John McLaughlin’s legacy and influence can be seen on at least five cable channels daily. He changed political TV. Right? or WRONG!!?? RIP

I grew up on this show. For political junkies there’s never been anything better or wonderfully grumpier. RIP sir. https://t.co/1T1sxo42xj

John McLaughlin’s show was one of the first political shows I ever watched. Condolences to those who knew him. https://t.co/XVYYi4ppf9

Once on his show, John McLaughlin asked me a question that seemed to last 3 mins. My reply: “Can you repeat that?” His: “Very funny. Pat!”

RIP #JohnMcLaughlin. For nearly 50 yrs, he succeeded at what he loved best: command of a public stage. We will miss him. @CNN

John McLaughlin gave us weekly dose of smart give & take when few existed. It was a big part of my early political education. RIP, sir.

Many fondly referenced the SNL sketches that parodied McLaughlin.

RIP John McLaughlin. My parents made us watch him every week which made the SNL sketches all the sweeter.

If you can be lampooned this brilliantly, you have been doing something right. RIP John McLaughlin. https://t.co/WQScWG1oXd

No, YOU are the one who is dealing with the passing of John McLaughlin by watching old Dana Carvey sketches https://t.co/jtn1tD1ByU